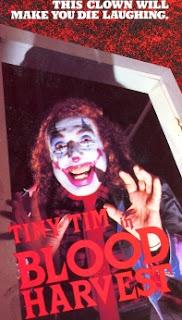 
“Not So” Tiny Tim, Itonia “Beanstalk Swank” Salchek, Dean “The Milquetoast Maniac” West, Lori “Hang Her Boobies High” Minetti, Frank “Sheriff Useless” Benson, Peter “I was young, I needed the money” Krause, and the Disturbing Absence of a Ukulele.


Jill (Salchek) returns to her quaint Wisconsin hometown from college only to find it in economic shambles. Her banker-father has foreclosed on many of the farmer-neighbors’ homes and her family has become a social pariah.


Matters worsen when Jill discovers that her parents are missing and the local Sheriff (Benson) seems more interested in softball and mugging at the camera than finding her folks. 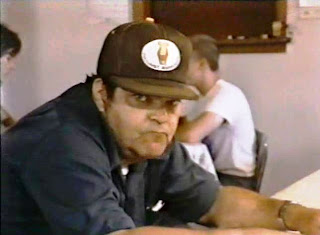 
Adding to her terror is wordy but efficient phone threats (“Fuck you, bitch!”), misspelled blood red graffiti on her house, and gold and green dummies hung in effigy to protest her greedy Pops.  Enter childhood friend Gary (West) and his weirdo former-circus clown brother Mervo (Tim) to save day. 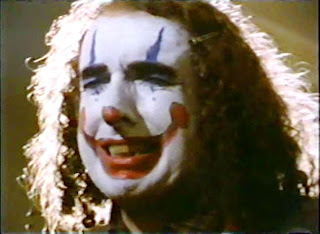 Tiptoe through my nightmares.


Unfortunately Gary, who’s crushed on human-stick figure Jill for years, becomes a little upset when Jill announces she has a boyfriend, 80s cheeseball Tom Cruise wannabe Scott (Krause of TV’s Six Feet Under and Parenthood) who unexpectedly shows up so we can have a nude scene.  The love triangle that ensues hampers the investigation into the disappearance and the identity of Jill’s harasser.  And the mentally unstable and puffy Mervo, who’s batshit cuckoo, obsessed with bible quotes, and is also Tiny Tim isn’t any help either. 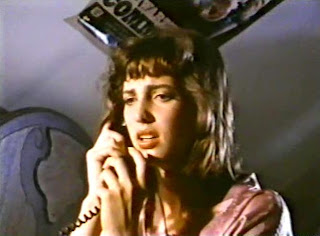 Fortunately, Jill’s Commando poster above her bed was a source of comfort.


And thus Jill’s nightmare begins as margarine tubs of blood wait silently and ready to pounce, a pantyhose-head creep stalks the night and takes pictures of Jill as she sleeps, and the victims pile up in the spooky barn out back where every victim seems to think is a safe place to hide. 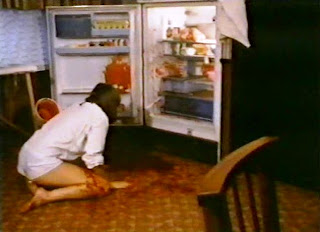 Something horrifying happened here.  I’ll have to get back to you.


In the end, we learn valuable lessons, never trust guys in sweaters during Wisconsin summers, never practice ballerina moves after rugburn sex, and never turn your back on your lunch with Tiny Tim in the room.


In difficult economic times such as now, you’d think the one-line movie pitch “Tiny Tim in a horror movie” would be just the thing to turn things around.  Think again.

Uncertainty about Tiny’s acting chops certainly didn’t stop Wisconsin auteur Bill Rebane (Monster A-Go-Go, Giant Spider Invasion) from seeing this pitch come to life. And the result is, well, weird, but you kinda couldn’t expect less from the ukulele-strumming legend.  Clad in clown pants, splotched with bad make-up, and being so him, Tiny is the best thing about this slow but eerie psychological thriller, but unfortunately his scenes are few and far between.  The film is probably Rebane’s most technically adept as absent is “The Rebane Touch” (essentially: 1. Point camera at people, 2. Tell them to say stuff, 3. Hide in a hayloft for three weeks and hope everything works out).  But unfortunately present are Rebane’s other staples: clunky dialogue, random religious references, and minimalist gore.  And then there’s not much blood harvesting going on, in fact it’s more like watching weeds grow.  But the real treat is watching the late, bloated, gloriously great Tiny Tim doing his shtick, disturbing and enthralling us with his own brand of unique weirdness that will probably be unparalleled in pop culture history.

And you can watch the entire movie for free on YouTube:

As to whether you'd WANT to, that's a different matter! ;-)