A sleek but strange black sedan stalks the streets of Chicago searching for victims to lure inside its eerie interior to be strangled by obsidian tentacles, ripped apart with razor sharp teeth, and consumed by soft Corinthian leather.  And it will take more than Ricardo Montalban’s latin lover accent and good posture to make this cursed Cordoba sell. 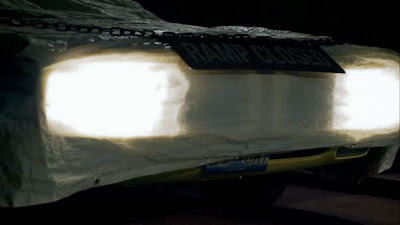 The car of your nightmares can be yours for All Your Body Parts Down, A Pint of Blood a Month (on Approved Credit)


After devouring a couple of low octane teens out for a night on the town, the car is flattened in an accident and has to be impounded at a city garage.  The garage employees led by dick boss Ray (Fehr) prepare for the garage’s closure for remodeling and will spend the night clearing out the joint. So the car is tucked in a corner somewhere where it waits, and watches. 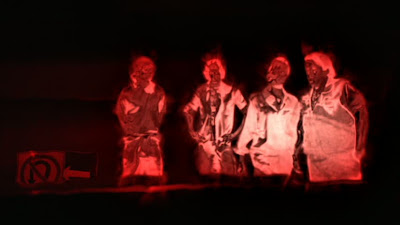 
The car repairs itself and possesses the ability to shape-shift into various car models - mostly American because monstrous vehicles that digest Cubs fans is what made this country great, damn it! Anyway, it messes with the mechanics' heads, morphing into your Grandpa’s Caddy, your Mom’s station wagon, and your penile-challenged dick neighbor’s pick-up truck.  Bored with the games, it starts picking off the garage staff one by one. 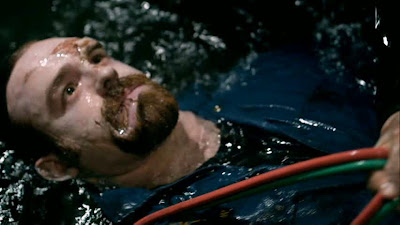 
Twenty-six minutes into the movie, we are presented with “it’s an ancient predator who mimics” theory as to the origin of the car.  I know, you’ve heard it all before. 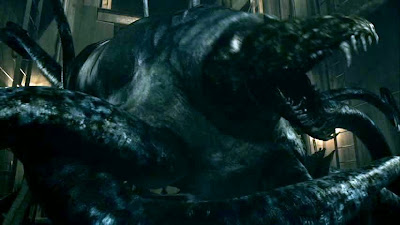 Female mechanic and car expert Tilda (Beckner), her nephew Bobby (Kennedy), sultry sarcastic secretary Maria (Papalia), and Ray are the last ones standing after the car’s all-you-can-eat demolition derby.  And it’s a scramble against time, the creature’s voracious hunger for blood, and rising oil prices to stop the Super Hybrid from being so Hybridy!* 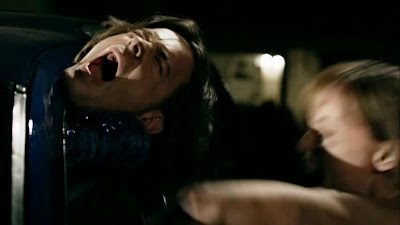 “The Goddamned Consumer Goddamned Reports is gonna hear about this one!”

*Dude, it’s totally not a hybrid!


I must admit that my heart skipped a beat when I read the tagline “The New Generation of Killer Car Movies is Here” on Super Hybrid’s DVD cover.  Finally, a triumphant 21st century return to a much maligned and forgotten subgenre!  Oh the running-down of dopey shoddily dressed gear heads!  Oh the promise of turbo-charged gore!  Oh the obvious technological metaphors!  And it’s directed by Eric Valette who made the not-completely terrible One Missed Call remake and it’s written by a guy named Benjamin Carr.  His name is CARR!  Super Hybrid starts off strong with a cool overhead shot of Chicago and appropriate music tailored for possible vehicular manslaughter.  Wonder of wonders I thought to myself, how could this go wrong?  Well, the question really is not how but how soon. Turns out, it took 26 minutes.  That’s when we learn that the car is a mighty morphing squid of some kind.  Skipped heart broken.  Oh, and it’s not a hybrid at all.  I know this because it did not morph into a smug ironic-glasses-wearing prick.  Beset by a total lack of gore and the budgetary aesthetics of a SYFY Original, the movie degenerates into a predictable spookshow in a car garage and not fuel-injected massacre of my dreams.  But it’s not a complete loss.  The finale is action-packed and enjoyable despite the poor CG effects.  In the end, what’s baffling is why the makers stuck to a PG-13 rating.  Were they anticipating a quick sale to SYFY?  Maybe, who knows?  In the end, the thirsty Super Hybrid may have a penchant for red but if the makers had made a blood-soaked thrill ride instead, they would’ve seen a lot more green.
at 5:00 AM