A police officer (Shafer, the future Bob Vance, Vance Refrigeration) prepares for his day doing what every good cop does in the morning: shine those boots, polish that badge, load that pistol, and bathe in the blood of the innocent. 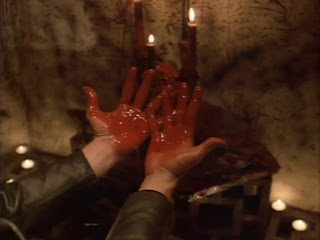 
But instead of protecting and serving, this cop is projecting knives and serving suffering as he roams the countryside offing innocent citizens, which when you think about it is only a few notches away from speed traps.  Offering his victims to Satan, the Psycho Cop stalks three fun-loving teen couples out for a weekend of partying in a quaint rental home. 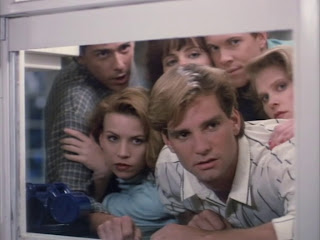 
The three couples, who apparently detest each other, spend most of their time drinking skunk beer, bickering about absolutely nothing, getting disturbed by the sound of wood chopping, and deciphering Satanic omens out of missing hairbrushes and spilled soup.  They guys are all annoying doofs begging for a slow death by billy club.  And if you close your eyes during the girls’ dialogue, you will hear every female character from any Peanuts special.  No wonder this cop went psycho. 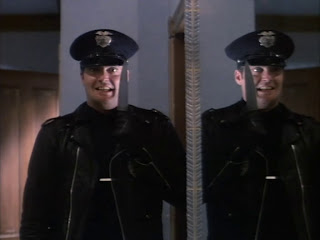 Officer Not Friendly. Nope, not friendly at all.


So Mr. P. Cop stalks these morons and offs them one by one, offering a brand of Hellish Justice for crimes known only in his maniacal mind. 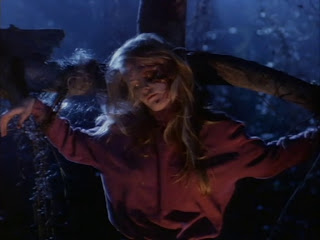 
OK, so killer cop movies instantly recalls Maniac Cop, right?  Yeah, well that Lustig classic has got nothing on this poor, dull, snoozefest which looks like it may have been literally shot in a weekend.  But it’s not without its uniqueness and may still appeal to bad movie masochists.  The characters/victims completely freak out for any reason.  A misplaced hairbrush is somehow a practical joke. Spilled soup is a national emergency.  Missing beer spells the End Times (yes, alcoholics maybe it does).  A chased character falls and screams “Ow, my ribs!” which was obviously dubbed.  Blunt logs cut through people like butter.  And Shafer, who is actually pretty hilarious as the robotic Psycho Cop, spews Krueger-esque kill quips that go over about as well as a turd in a jail cell. 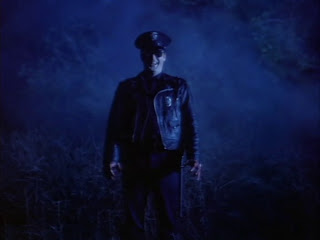 Better titles would have been The Batshit Sheriff, The Devil’s Deputy, The Cuckoo Constable.

Even when you think about it in respective terms, this late 80s slasher feels dated and eight years too late and probably would have fared better during the slasher glut earlier in that decade.  Accented with fairly obvious references to Halloween, Terminator, and Nightmare on Elm Street, the movie isn’t worth the time to seek out even for the most hardcore of 80s slasher completists (although there was a sequel!).
at 5:00 AM