In the near future, the cost of a gallon of gasoline has risen to $36 which is slightly less than the Chevron on Cesar Chavez and Alameda today.  No one but the very rich and powerful drive and the rest of the world is left to ride bikes like incredibly fit schmucks. Archie (Brune), a milquetoast vegan kindergarten teacher, is struggling to invent an engine that runs on wheatgrass, vegetable juice, and hippie dreams. 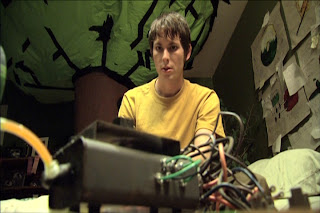 
In between bedroom engineering and reading inappropriate stories to his class of confused kiddies, he buys said wheatgrass from local vegan cutie Lorraine (Chlumsky) who is hopelessly in love with the indifferent Archie. 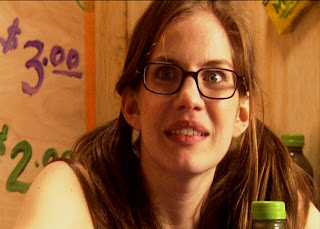 My Girl’s girl: “Where’s a bee swarm when you need one?”


When all efforts to get the engine started fail, he goes on a spastic rage and accidently cuts his arm.  His blood drips on the prototype which magically makes it work, even without Tim Gunn’s catty inspiration.  After failed attempts to use animal blood, he concludes that the engine thirsts only for human blood.  He eventually designs and installs a larger version to fit in the trunk of his Honda of Horror. 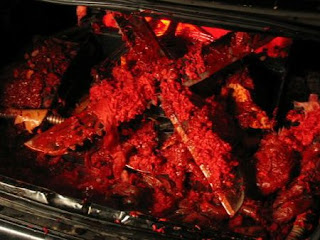 Henry Ford and Boris Karloff would be proud. 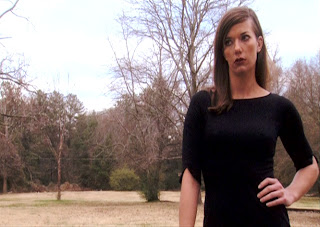 
She seduces the hard-up Archie for free rides and all kinds of kinky non-J.G. Ballard scripted car sex, much to the chagrin of broken-hearted Lorraine.  To keep his social calendar active, Archie embarks on a rampage of violence and killing to keep his tank full and his pants off. 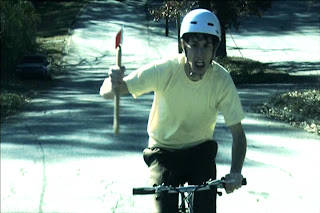 Finally, a green serial killer.  You can all shut up now, hippies!


But Archie’s shenanigans also draw the attention of mysterious government agents who want the secret to his maniacal mechanizations.  But even though Archie has forsaken his integrity, beliefs, and perhaps true love, he fights the power and goes on a nutty binge of appalling sadism that would make Patrick Bateman on coke blush. 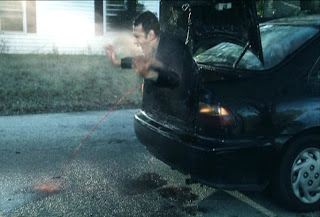 Cheaper than a Texaco card, I can assure you.


Blood Car isn’t really an evil car movie; it’s more an evil people movie, that is, unintentionally evil people.  It satirizes our dependence on gasoline and the car culture that’s just as addictive as sex and power.  Hysterical but ultimately flawed, Blood Car explores really cool ideas that could have merged into a brilliant black comedy had it had more time to flesh out its satirical themes and a bigger budget to hammer them down.  It’s still a really funny and messed-up movie with plenty of dark humor, wanton blood and boobs, and enough dirty talk to ruin a sailor’s bachelor party.  While most of the actors are absolutely fine, it’s Rowlett as the sex-hungry but unmoved Denise who almost steals the film with a profane performance of passive apathy. Plus she’s super hot. Also not doing bad in the growing up department is Chlumsky who appears to be ready for her own True Blood-esque break out.  The movie is also shot and edited very well for such a low-budget picture and the distasteful jokes and gory hijinks make up for the evident lack of resources.  But as it goes with all of these kinds of micro-budget films, the story falls apart about two-thirds of the way as the filmmakers struggle with reaching feature length or whatever the reason.  Fortunately, the grim finale makes it worth the wait with a truly dismal, screwed-up, and hilarious resolution.  In these times, Blood Car may be too on-the-nose, but at least there’s comfort in knowing that we’ll have plenty of hippies, racists, and airheads to fuel our trip to Hell.
at 11:54 AM