Don’t worry, this movie contains no perverts who like to do it during fender benders or Sandra Bullocks whining in some rich white guy’s vision of a racially simmering Los Angeles that are about as realistic as my aspirations to win the LGPA.  Even better, we have an evil car fueled by blood-steamed vengeance that, *pinch me*, actually growls! 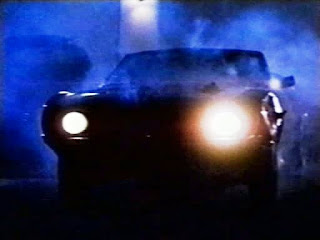 
Our story begins when young hottie Kim (Lyon, Lolita) goes shopping in a drive-in swap meet to search for, well whatever it is people buy at swap meets.  Tires?  Gum?  Cheese spread?  Desperation? 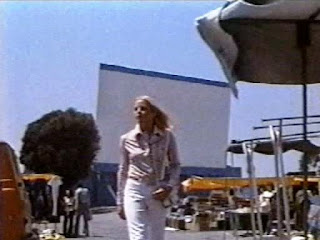 
Turns out people buy old Hittite relics that hold the power to unleash hellish vengeance at the very whim of their owners, which is exactly the kind of discount knick-knack Kim purchases from a wheezy swap meet weirdo.  She returns home to her wheelchair-bound husband Marc (José Ferrer) who’s intensely jealous and suspicious of his pretty wife’s life on two-feet. 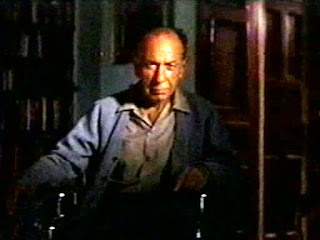 “Well, at least I can say I nailed Rosemary Clooney.”


The couple fights over Marc’s constant outlandish accusations of her infidelity and when Wheelie gets violent, she flees their home. Naturally, they seek counseling and therapy and in time trust is re-established and their relationship prospers and strengthens through their newfound belief in one another.  Naaaah.  He sends his monstrous pitbull after her as she’s driving away.  The dog attacks her in her black convertible which crashes and erupts in flame.  Still clutching the idol, she survives the accident and awakes in the hospital with severe wounds, amnesia, and a bout of demonic possession. 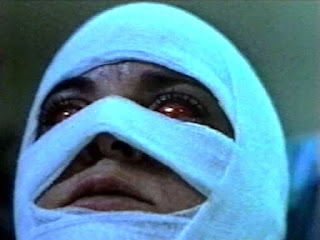 That’s ObamaCare for you!


Using Kim’s subconscious desire for vengeance, the idol takes control of her convertible which starts to terrorize motorists, cops, and hippies in vans all across the land. 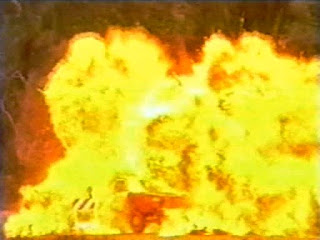 
Her doctor Greg (Ericson) and nurse Kathy (Parrish, Giant Spider Invasion) take a special interest in Kim’s case.  They notice her spellbound obsession with the idol and decide to investigate its power through intense research and consulting scholarly journals, local libraries, and renowned experts. Naaaah.  They call on John Carradine. 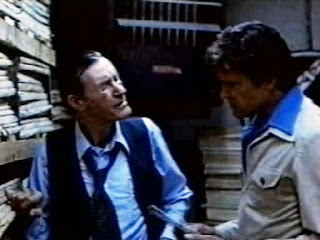 
Greg discovers that the only person who can unravel the mystery of the idol is of course Marc himself, an cultural anthropologist.  When Marc discovers that Kim survived the attack, he plots to kill her in the hospital but fails.  He returns home where Kim remotely controls his wheelchair to kill him. 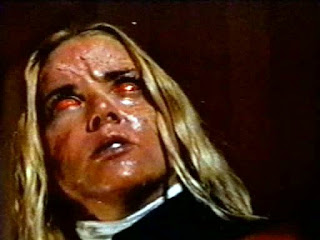 Couldn’t get a screenshot of the wheelchair attack, so here’s another shot of possessed Lolita.


Meanwhile, the possessed vehicle continues its motoring massacre wiping out every used car and leftover Starsky & Hutch cop car in the state. 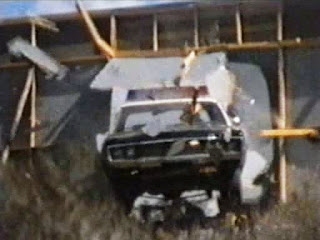 
Eventually, Marc takes Kim home from the hospital and promptly locks her in the couple’s spa as the car circles the house, calling Marc out as Kim reaches the moistness of a good hot dog bun.  Most of this final showdown is comprised of Kim regaining her memory in which the movie FLASHES BACK EVERY SINGLE CAR CRASH FROM THE LAST HOUR!  And once the final showdown/time filler is complete, all you’ll want is a warm place to forget and to CRASH!


If you lived and breathed in the 80s and were able to walk and be semi-sober, chances are you’ve seen and/or heard a Charles Band movie, or at the very least been felt up during one.  His companies Empire Pictures (Cemetery High, Re-Animator) and Full Moon Features (Puppet Master, Dollman) pumped out many a Friday night creature feature and enough cinema badness to fill 365 Days of Halloween.  (Please, no!)  Just looking at his output as director and producer makes me want to rethink Spielberg and Kubrick as childhood movie influences.  And the man had his hand in just as much greatness (From Beyond) as he did crap (Robot Holocaust).  Speaking of crap, Band’s foray into the evil car sub-genre is CRASH!, a super duper low budget occult thriller shot somewhere in central California over a weekend, or so it appeared.  Now, anyone born before 1977 can call me Will Rogers but I’ve never seen a movie with lots of car crashes I didn’t like.  But CRASH! is a mixed mélange of horror, melodrama, and action that delivers spectacularly cheap returns.  The movie is about one-third evil car, one-third possession/revenge story, and one-third “where’s the remote?”, the last third due to facts that the cinematography is murky (shot by future The Fugitive director Andrew Davis), the plot nonsensical to labyrinthine at times, and that the vile convertible seems to occupy a universe where cars blow up by lightly tapping them.  CRASH! was an early Band film and the amateurism surely shown throughout is forgivable and not completely terrible.  In fact, Lyon and Ferrer are good sports dealing with all the silliness, explosions, and vehicle smashing.  And the car, well, the car was a just a grouchy pompous ass! 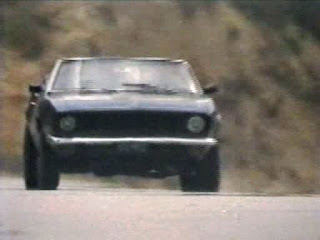