Movie the mis-named Slasher,
Was a total waste of time,
And if you never watch it,
You’ve got better sense than mine!

Wow, even in the early 80s California’s state budget was in the shitter. It was so bad that student volunteers have to stay over the holiday break and clean up a building that’s scheduled for demolition. Now that’s some school spirit. Or stupidity. 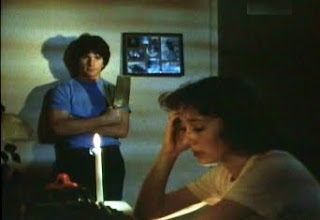 Man, why does Serial Killing 101 have to be so haaard???
So five kooky college kids including sexually placid Joanne (Laurie Lapinski), goofy hunk Brian (David Snow), forgettable chick Patti (Pamela Holland), prankster who doesn’t prank Craig (Stephen Sachs), and late 80s Tremendo crush Debbie (Daphne Zuniga) sacrifice their X-mas to clean the filth left behind from classmates not on Pell grants. But there’s a murderous stalker on the loose on the campus grounds, and it might be the weirdo janitor, the even weirder school hobo, or the weird set-to-11 shirtless classic rock-listening Bobby Lee Tremble (Dennis Ely). 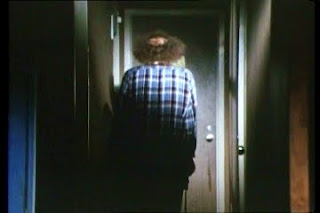 Steven Wright? Nooooooo!
So the number of these sprite volunteers dwindles as our killer gets busy on their academic asses. Like an undecided undergrad, the killer just can’t commit to any one method of disposal. One is beaten with a bat. Another is knocked unconscious and then skid-marked to death. Another is dropped in a vat and cooked alive. 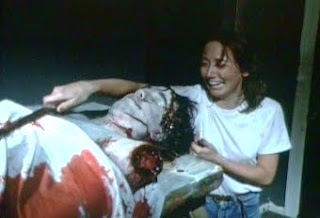 Leftovers, again?
And yet another victime is subjected to dull TV-movie antics, white trash horror, Vinnie Barbarino hairdos, and boredom. And that victim would be yours truly.

Pranks (aka The Dorm That Dripped Blood) is one of those holiday slasher flicks that has very little do to with X-mas, other than its setting which is during a college holiday break. Although red and green lights are strung in a few scenes, there’s relatively little to remind us that this is happening over X-mas. So then we just have a standard early 80s slasher movie with a predictable killer reveal and a few interesting kills scenes to serve as the rest spot for your ho-ho-horror movie marathon. Hell, the whole school-related slasher was done much better in Final Exam. Daphne “Sure Thing, Spaceballs, Melrose Place” Zuniga is the only real name in this flick besides a smattering of lesser names that although they were decent for their parts (such as psycho joker Craig) never did much outside this movie. The soundtrack is perhaps the standout of the flick, recalling Psycho with a hint of Friday the 13th chords. Other than some blood splatter and a horribly unattractive booby scene, most of the movie looks drab and grey with an equally dull and languid pace. The story lacks any kind of gross interest as the killer’s motivation adds up to simple “Hey, baby I was horny for you so I offed these chumps”. Also, I’m not sure why this movie was renamed from The Dorm That Dripped Blood to Pranks. Much like X-mas presents from Grandma, the ending - though remarkable for its stray from slasher convention - is a complete groaning jump-off-a-roof downer. Aside from the one of the characters being your stock 80s slasher jokester, there aren’t many pranks to be seen – well, other than the fact that I was completely pranked into believing that this was a X-mas slasher flick. Innocente!
at 7:03 AM