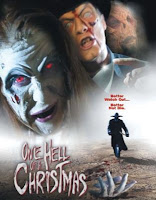 A three-hour credit sequence; a Carlitos in search of a way out of this movie; that part of Nevada where everyone has a silly accent; not-so subtly numbered taxi cabs; the Russian dude from 2012; Death Fridge, the Fridge That Eats; the busy seaport of Las Vegas; Glad Hooker Disposal Bags; and a Very Coked-Out X-mas!

A portly Englishman visits a weirdo in a Wise Man outfit, some fruitcake named Ibrahim, and sells him a mysterious object, a fang-shaped symbol encased in a smoky chest. Ibrahim is overjoyed at receiving the object but we can't learn much about its significance because we're interrupted by a endless credit sequence. Cut to a prison in the Nevada desert where small-time hood Carlitos has been paroled and awaits a ride from his slimey con pal Mike who forgets to show up. During his hitched ride into town, Carlito decides to turn a new leaf and set his life straight for his little boy who lives with his estranged wife. 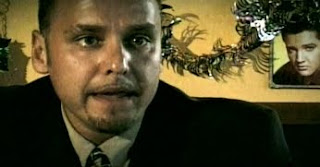 The King does not approve.

Meanwhile, Mike is up to his old shenanigans at the docks (after all, this is Nevada) and runs into Ibrahim who's killed by a mysterious and powerful stranger who's searching for the black fang. He is able to escape but not before stealing the fang which when snorted gives him incredible strength and invulnerability. Carlitos is back sulking at his old house, spurned by his ex-wife, when Mike shows up at his door. He tempts Carlitos into snorting up which causes him to strangle a hooker during violent hallucinatory sex. After disposing of the body, Mike ditches him to go bang Carlitos' ex-wife, leaving him in a paranoid state, besieged by odd sounds and violations by major appliances. Left alone, hungover, and freaked out, Carlitos is attacked by the zombie hooker... 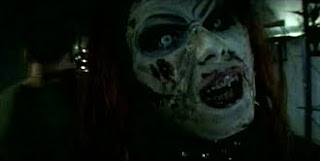 Ahh, they don't make whores like they used to anymore.
...assaulted by a werewolf doll...

Guess he's not on Team Jacob.
and threatened by a monstrous cowboy who came to life from a movie poster. 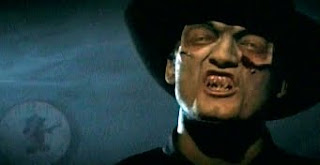 Spare some brains, Pilgrim?
Carlitos fights for his life against these horrific manifestations but eventually the mysterious man comes around to claim what is his, and at stake will be Caritos' soul. Well, after he wipes down all the hooker sweat.

One Hell of a Christmas is yet another misnamed holiday movie. Other than the setting, there is very little about X-mas in this film and Hell only makes a very short cameo. The director of the movie is named Shaky Gonzales. If this is in fact his real name, it is particularly apt, for it describes his plotting and storytelling style. It is very Gonzales-y. I guess the only real connection I can make to X-mas is that it plays out like a really cheap and not very well thought-out re-envisioning of A Christmas Carol. Carlitos is the criminal Scrooge forced to confront his past and drug abuse and seek deliverance after visits from three spirits – the zombie hooker, the stuffed werewolf, and the undead cowboy - all universal symbols of soul redemption, right? Mike is Jacob Marley and the audience is Tiny Tim, barely hobbling along through this painful mess. That's pretty much where the comparison ends. The DVD print is terrible - murky, dark, and pixelated. The Carlitos guy does the best he can with what little he has to do, but his silly accent kept from taking anything happening to him seriously. By the looks of it, Shaky desired to make an earnest movie about Hell, sin, and salvation and there are moments of skilled filmmaking in all-too brief spots in the movie. To be fair, I have heard good things about Shaky's more recent efforts, particularly the bigger-budgeted actioner Pistoleros which comes recommended. Perhaps Shaky straightened out since this sophomoric effort, turned nice from naughty, and put behind him this well-intentioned but ultimately stinky lump of bad movie coal.
at 6:00 AM

J3SUS FLIPPING CHRIST. WHERE IN THE EHLL DID YOU LEAR TO WRITE MOVI REVIWES?

@Anon- Apparently, the same place you learned to type, Chummmm....p!