It’s Christmastime in Snomonton, the most made-up named town in the entire world, and a dark snowstorm descends upon this burg of mildly mentally disabled hicks. Sheriff Sam Tiler (Christopher Allport) drive home in the storm with his wife and son, haunted by memories of the mass murderer he recently captured, the demonic Jack Frost (Scott MacDonald). Meanwhile, the condemned serial killer Frost is being transported on a snowy highway towards a prison where he will be executed for his numerous crimes. But sno-larity ensues when the prison van collides was a truck carrying an experimental chemical. Jack is able to escape in the aftermath, but is felled by a burst of the chemical which appears to dissolve his body into a fine goo that gets absorbed by the newly fallen snow. (Excuse me while I wipe a tear. Bad movie science always gets me misty-eyed. Sniff.). 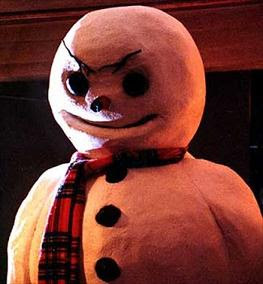 Frost is reincarnated as a living killer snowman out for vengeance against the inhabitants of Snomonton, especially Sheriff Tiler who imprisoned him. Where's Jimmy Durante with a flame thrower when you need him? Over the next few days, a string of mysterious snow-based crimes take place including… 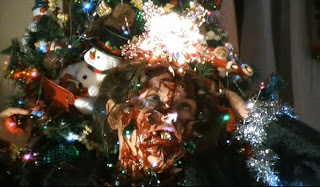 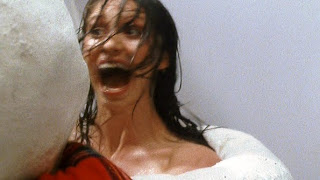 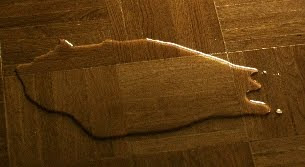 And snowman scat.
And throw in an old person smothering, a kid decapitation, and sarcastic one-liners and you got the entire Snowmonton populace in horrified hysterics. This draws the attention of FBI Agent Manners (Stephen Mendel) and goofy scientist Stone (Rob LaBelle) who arrive in town to capture the icy abomination. We discover that the chemical was part of a secret government operation, but for what no one knows. A secret army of snow cone assassins? Since bullets are useless against this slushy nightmare, the town takes up arms with hairdryers and aerosol cans to ward off this frozen freak of nature. And it’s a battle to the death against this cool killer who’s seemingly unstoppable and cannot be contained. We’re going to need one hell of a Slurpee machine.
THE FINISHER:

Simple formula for a holiday horror movie: take an icon of the holiday, even if it's technically not alive, and make it a killing-thing. It worked with Santa in Silent Night, Deadly Night, a turkey in Thankskilling; and a cookie in Gingerdead Man. Okay, so the term “worked” is subjective. In Jack Frost it’s not the icon of winter that gets the slasher treatment, but the perennial happy holiday snowman of Frosty yore and song, albeit in cheesy low budget fashion. To flesh out the killer holiday concept, you should arm the killing-thing with items associated with it. This holiday killer can strangle with Christmas lights, shoot sharp icicles through horny teenagers, and do unspeakable things with its …ahem…corncob pipe. (Yes, the frickin’ snowman bangs Shannon Elizabeth. Yeesh). Oh, and it’s probably a good idea to make the holiday killing-thing nearly invincible so that the last thing the heroes think of to destroy the thing is actually the most obvious. The movie works in the sarcastic killer horror comedy mode like Nightmare on Elm Street and Child’s Play, where the murders are basically set-ups for the killer’s awful one-liners. And awful they are with most of them landing with a squishy thud. But for the most part, the movie is a holiday indulgence into abject desecration of all that is cute and sweet during this cherished season. Jack Frost is supremely absurd, a hokey oddity filled with wonderful nonsense and tongue-in-cheek stupidity, and therefore an antidote for the syrupy hokum that fills the airways this time of year, the whole frickin’ reason I’m doing the 13 Days of X-mas in the first place.
at 5:00 AM