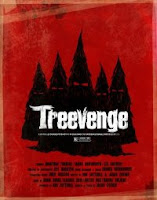 THE CARD:
Lumberjacks that are definitely not OK; an X-mas ninja star kill; the truth about your neighborhood X-mas tree lot; a Holly Holocaust; the unfortunately absence of Woodland Critters; a bloody fir-enzy where no sap is leaved alone; A Very Lucio Fulci X-mas; and - finally - a fast-moving killer X-mas tree done right!

The annual butchery of X-mas trees is exposed in horrid detail from the harvesting of leafy victims to the subsequent destruction of X-mas tree families to the horrific display of ball trimming. The EEEVIL lumberjacks hiss in glee and apparent arousal at the annual massacre of our sappy forest friends: 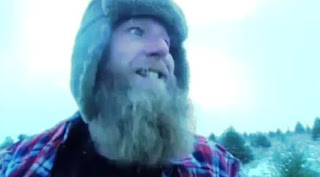 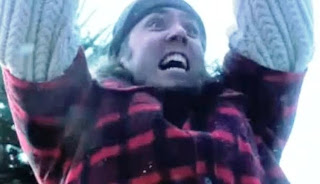 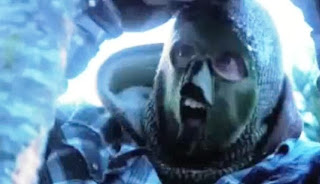 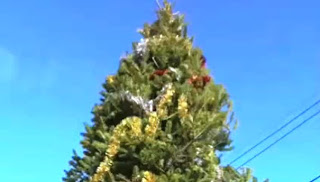 A timid woodland Freddy Krueger.
Anyway, on X-mas morning the sentient, revenge-hungry, Ewok-speaking trees unite to destroy their ugly sweater-wearing captors and proceed with the most inhumane, atrocious, and bloody assault on the human senses since the last M. Night Shyamalan movie.

Last year, I reviewed that I thought was the latest fast-moving killer X-mas tree movie released this decade: Trees 2: Root of All Evil. In that review I wrote about what was wrong with most fast-moving killing X-mas tree movies, and perhaps the genre as a whole which I felt was headed down a path of deteriorating quality. But my fears have been allayed with the release of director Jason Eisener’s Treevenge, a delightfully sick and twisted moonwalk-sized leap forward for the future of fast-moving killer X-mas tree movies. I can’t think of a single full-length horror film I’ve seen this year that had the amount of satisfaction that this Grindhouse-inspired short film provided. Gory, hilarious, and maybe even a little awe-inspiring. The movie is plenty ludicrous but like most good parodies the absurdity is executing with great skill and good timing with a hint of smart, albeit massively gruesome, humor. The things that work in this short are the casts’ gleeful, maniacal performances, the use of practical gore effects, and the tree puppetry that come completely with a shrieking language of their own. Hollywood, Bollywood – SOMEBODY – give this Eisener kid a feature. That’s the best gift I could think of to fill my film geek stocking.

Want to see Treevenge? Find out how right here.
at 7:14 AM