Single mom Laura (Cassidy) escapes the hustle and bustle of the city and settles in rural Copper Valley with her pre-teen daughter Stephanie (Leeds).  The small family adjusts quickly as Stephanie makes friends quickly, townspeople are welcoming and friendly, and Laura lands a job as the school bus driver.  But things go quickly awry when a creepy Dodge muscle car stalks the valley running over cheapskate Dads and terrorizing young girls. 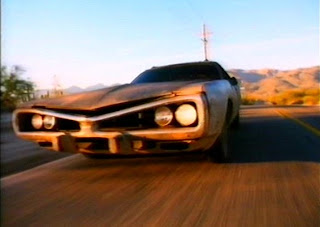 
Unfortunately, the kids are spared death and are sexually assaulted before being released and left traumatized for life.  The town erupts in fear and blames the inept police department and the head detective in charge (Snyder) for lack of answers.  Curiously, no one seems to notice that the black primered car waits for kids IN FRONT OF THE SCHOOL EVERY AFTERNOON.  But being the keen big city gal she is, Laura soon develops suspicion about this car, especially when it tries to run the bus full of kids off the road. 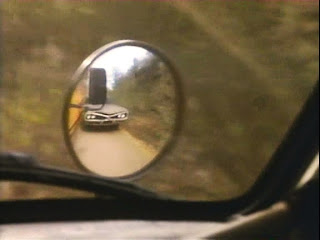 Objects in the mirror are eviler than they appear


And then the car starts to stalk Laura and Stephanie around their ranch home, revving the engine and circling the yard in the middle of the night menacingly. 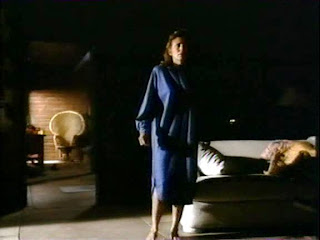 You’re a long way from that sexy transparent jacket, baby.


But no one from the inept police Detective to the horndog Hispanic mechanic (Cervantes) believes her story despite multiple witnesses and the continued disappearances of young girls.  So when Stephanie is taken right in front her, Laura pops the clutch and puts the hammer down and pursues the villainous vehicle her own self. 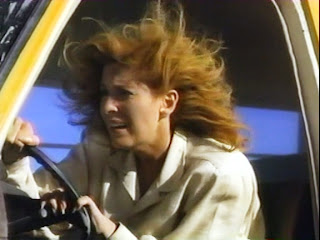 
What follows is a Motherly showdown worthy of Ellen Ripley, Sarah Conner, Beatrix Kidd, or at the very least a very ticked off Sally Field.


Once again, Arizona is the setting for an evil car movie in Wheels of Terror but this time the horror is inspired less by supernatural or demonic forces but one more grounded in reality, a parent’s nightmare of their child being abducted, assaulted and murdered.  That fact makes viewing this movie feel all the more icky but yet it reinforces characters' motivations and our identification with Laura's plight as a desperate mother all the more.  So in effect, the movie plays out more like The Car as if re-imagined by the Lifetime network.  Hell, maybe Oprah.  Unfortunately, we don’t get to know much about Laura and Stephanie.  We get the gist that she’s moved from L.A. to this small town but aren’t given much to go with that.  There’s not even a suggestion as to why she’s relocated, why she picked this Podunk town, or why she’s so good at driving school buses loaded with racing car engines. 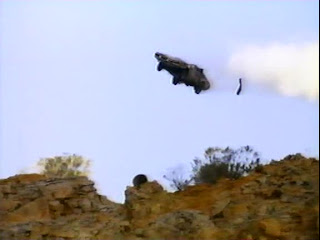 This flying Dodge loves kids, but not in a Chitty-Chitty-Bang-Bang kind of way.


Also ridiculous is the police, the townspeople, and the children’s inability to LOOK RIGHT, as in the DIRECTION THE CREEPY MOLESTER CAR IS COMING AT YOU.  But despite the lack of character development, the movie is not without charm as the last 50 minutes are dedicated to Laura and the Dodge’s explosive car chase confrontation which is actually pretty darn good.  Wheels of Terror was a TV-movie produced for the USA Network and was directed by Christopher Cain whose previous effort was the hit Young Guns, and so the film is fairly bloodless but not without its aforementioned atmosphere of desperation and well, icky-ness, and deserves a spot in the pantheon of evil car lore.

Pretty good review. Agree with most of your observations. It's really too bad the movie gets poo-pooed & and never got a proper DVD release. I got a decent DVD bootleg.