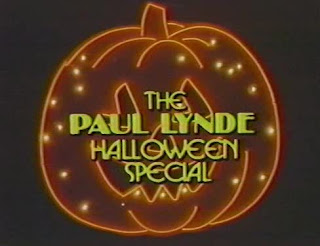 Actor/comedian/game show staple Paul Lynde is a TV icon of the 1970s.  His career spanned Broadway to bit parts in sitcoms to feature film comedies to bigger parts in network shows to perhaps his most memorable role occupying the center square on the original Hollywood Squares.  Older folks will remember him as mischievous Uncle Arthur on Bewitched while younger people may not realize that Lynde's trademark snarky, catty mannerisms are still referenced in characters from The Simpsons, American Dad and Family Guy.  Lynde played the awkward nervous guy and self-absorbed foil to perfection.  He reveled in the sarcastic quip and was a master of the witty double-entendre which often alluded to his secret but not so secret sexual preference.  He was a really funny guy.  So it's no surprise that ABC tapped him to do a couple of TV holiday-themed variety shows*.  The Paul Lynde Halloween Special aired on October 29th, 1976 and featured a cavalcade of stars including an iconic rock band's television debut and absolutely no members of Chewbacca's family.  Let's review.

The show opens with Lynde confusing the theme of his holiday special.

X-mas, Easter, and Valentine's would all be more tolerable with a little Lynde.

After a scolding by his maid (Margaret Hamilton, aka Wizard of Oz's Wicked Witch of the West), Lynde performs an agonizing Bruce Vilanch-scripted monologue filled with election day and fat kid jokes that, to no fault of Lynde's, land like 10-ton candy corns. 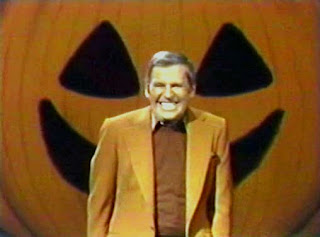 I'd like to see John Stewart blab against an awesome giant jack-o'lantern background.

But we do learn that Lynde was a chubby kid who one Halloween dressed up like the Hindenburg.  The result?  It was a disaster. Hey oh!!  (I actually chuckled warmly at that one.)  Last word on the monologue: a Bugsy Malone reference!  Paul then sings a song and dance number about kids and Halloween that ends with him being dumped in a trash can by other variety show icons Donny & Marie: 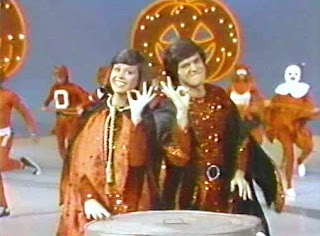 Margaret then wisks Paul away for an evening at her sister's house who turns out to be H.R. Pufnstuf's Witchiepoo (Billie Hayes). Goddamn this thing is soooo 70s. 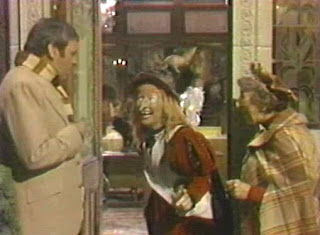 If the Wicked Witch and Witchiepoo can't turn Paul, no one can. 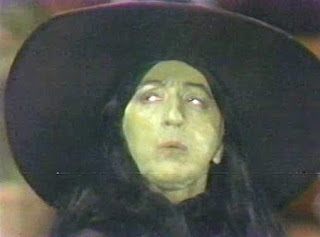 She was instrumental in releasing Toto's Africa in the 80s. Heh...heh...

They also introduce Paul to Miss Halloween (Betty White), who mistakes him for Paul Newman and then insults him cruelly. 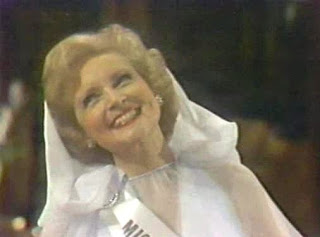 "In thirty-five years, I will be a GOD!"

In exchange for some good press, the witches grant Paul three wishes.  His first  wish is to become a truck driver, or at the very least participate in a really long, drawn-out sketch about truck driving which was fricking HUGELY popular in the 70s.  Seriously, they made movies and TV shows about it and everyone talked in CB Radio talk and ate a lot of bacon and did speed and there was a huge hemorrhoid epidemic and ... well, let's just say it was just a very confusing time.  What happens next are three words that have saved many a shitty variety show: Enter Tim Conway. 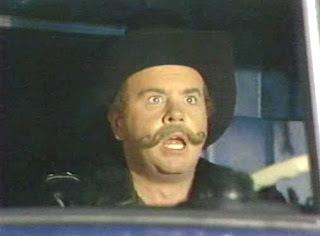 "Breaker, breaker, anyone got a 20 on Harvey Korman so I crack him the fuck up?" 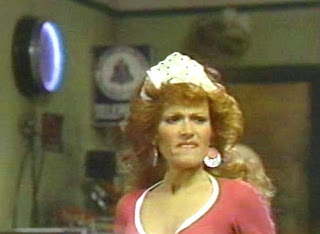 Guys, if this thing gets any more 70s, Elton John's disco sunglasses will sprout from my head. Anyway, Paul wins the girl when he announces that he'll be rich because a movie is being made about his life called "Deep Truck" in which he has a "teeny weeny part".  Another warm chuckle.  The gang and some hard-bodied bachelors then engage in the biggest dance number about truck driving since Convoy. 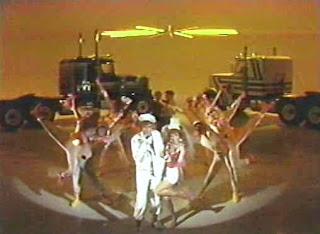 Nothing screams Halloween more than dancing and singing about trucks.

So far, I can't see how a kid, even a 70s kid, would enjoy this special.  Despite the presence of kid show star Witchiepoo, none of the jokes are dumbed down for children, not even stupid children.  To illustrate, Paul's next wish is to be a Arabian sheikh and make out awkwardly in a desert tent with Florence Henderson.  Florence of Arabia, guys!  HAHAHAHAHAHA...heh...heh... 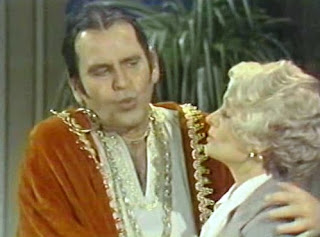 Some immense will power in display here, folks. 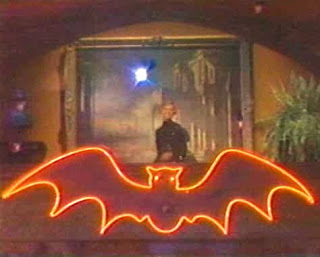 But then we come to the real curious cultural artifact of this special: the television debut of KISS.  They take the Witchiepoo stage and belt out their hit Detroit Rock City. 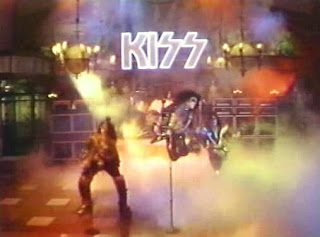 Toned down were the lyrics and Paul Stanley's bulge.

I have to be honest here and risk the un- and de-friending of some good pals but I never thought KISS was any good.  I thought they were all flash, flesh, and gimmick.  Kids around the neighborhood worshiped these guys, which gave way to the adoration of the similarly silly sheet-metal bands of the 80s. I guess have KISS-lexia because I can't tell any of their songs apart, aside from the popular ones.  Gene Simmons, who I admire as a man who enjoys a good comic book and ghost story, is despised as a reality star and snake oil salesman for anything and everything KISS.  There's my honesty, bared out in the open.  But in the special they are really good sports and lip-synch their hearts out.  They follow Detroit Rock City with other giant hit Beth. 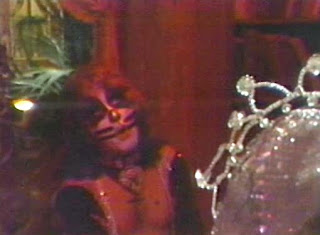 I wished he purred this song.

Lastly, they blow the roof off the dump with King of the Night Time World. And then Lynde knocks it out of the park with a "kiss and make-up" joke.  Last warm chuckle of the evening.  In the final number, everyone gathers to sing something that involves the lyric "Move it in, move it out, Disco Baby!" repeatedly while KISS chills in the rafters. 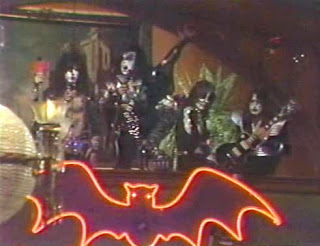 Ace refuses to participate in the Disco Baby abomination, probably because he's asleep.

The show ends with Paul Lynde addressing the TV audience directly and sincerely thanking them for "accepting him" (for real, his words!) and letting his kooky troupe entertain us this evening.  Despite the corniness, the hit-and-miss one-liners, the lack of specific Halloween-related skits, and the fact that I forgot to include Billy Barty's presence in the show, The Paul Lynde Halloween Show was an amusing and fond look back at a time long gone.  Despite a few attempts to restart the genre, variety shows have been replaced with singing contests and reality talent shows, and we may never see the likes of star-driven holiday shows again (Stephen Colbert a very strong exception).  But sadder is the fact that we may never see the likes of a Paul Lynde again, a man who despite a troubled personal life managed to keep us laughing and keeping our dirty minds active for decades with a swishy wit, sardonic smirk, and an acidicly dark sense of humor. 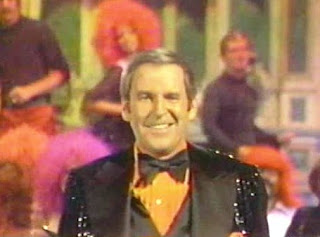 But I still want that goddamned neon bat!

*I could have sworn there is another Paul Lynde special with Alice Cooper, but my research came up empty.  Anyone? Anyone?
at 3:00 AM