Pic starts promising with a couple of hooded guys chasing a comely female in a spooky cave which results in torn clothing, kicks to hooded guys’ groins, exposed nether regions, and a hand amputation.  The hoods then trap the still-moving and seemingly intelligent hand in a silver box to seal away this apparent appendage of evil.  We learn very quickly it’s evil because a half-second-long shot of a demonic figure flashes subliminally throughout the rest of the movie. 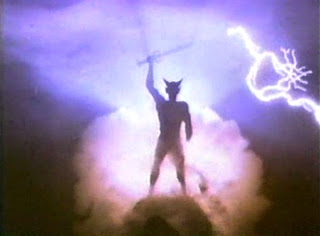 Flash forward many unknown number of years to Guanajuato, Mexico, site of a new silver mine owned by Jennifer (Eggar) and husband Mark (Jenson) who are having trouble keeping employees as the mine spooks the taco-enjoying locals who believe it to be the cursed tomb of the demon-hand.  Soon snoopy Whitey unintentionally unleashes the demon hand which takes possession of all who touch it, granting them incredible strength and will to commit evil. 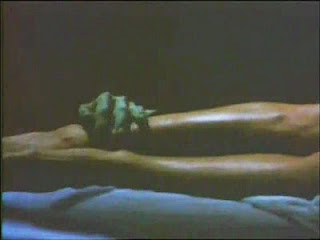 Smooth as a baby demonoid's bottom.


The hand takes control of Mark who then blows up the mine, sealing it forever while killing several workers.  He disappears and Jennifer embarks on a worldwide search for him which eventually leads her to Los Angeles, the home of immoral body parts.  There she meets boxer-blacksmith-priest Father Cunningham (Whitman) who knows Mark’s whereabouts but guffaws this silly evil hand nonsense. 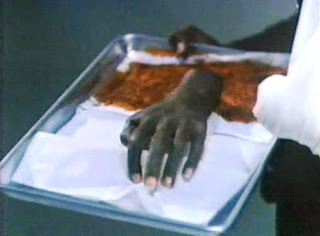 Give me five, brotha!


That is, until the evil hand emerges from Mark’s paupers grave, takes possession of a few folks who get their hands cut-off in mild to outrageous ways, from cauterizer to freight train.  Jennifer has learned that the hand is seeking her out for reasons never explained and Father C has to become strong and confront his weakening faith, just like every horror movie priest is mandated to do.  Fortunately, Father C is a blacksmith of some type (it’s never really explained either) which sets up an excuse to use a blowtorch in the final act.  And in the end we learn that when you talk to the hand, it sometimes talks back.

Demonoid (aka Messenger of Death and The Devil’s Hand) plays out like a macabre body part shock show with 70s TV movie aesthetics and a few unintentional laugh out loud attempts at horror.  But the real terror is seeing the poor bewildered faces of Eggar and Whitman trying to keep a straight face through this film. 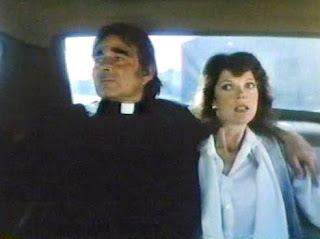 
Whitman’s accent subtly shifts between Irish and American but fortunately he appears quite sober throughout the picture.  Eggar’s presence pretty much serves to class up the joint, but little else. Russ Meyer legend Haji turns in a small role as a vengeful gambler’s girlfriend who gets a full face of evil hand. 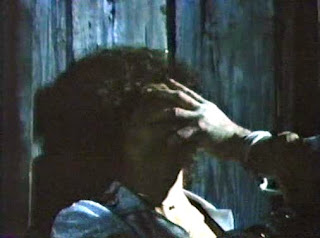 
Apparently, the movie was filmed before Oliver Stone’s body part flick The Hand but sat around waiting to be released in the midst of a mini-living-evil-hand craze that I don’t remember happening at all.  Demonoid is possibly one of the worst movies I’ve ever seen: slow, abjectly cheap, poorly lit, and nonsensical to the point of absurdity, riddled with pointless …