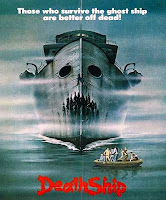 
The 1970s were to Cruise Ships as Jimmie “J.J.” Walker was to comedy.  They existed.  And aboard a very 70s-ish cruise liner is Captain Ashland (Kennedy) who is about to retire as captain of the particularly non-dyno-mite ship.  He’s also quite bitter about handing over the reins to younger, superiorly bearded Trevor Marshall (Crenna) who’s brought his wife Margaret (Howes) and young family aboard.  Never quite fitting in with his fun-loving, buffet-gorging passengers, Ashland reflects resentfully on the dying art of life on the high seas. He also hires chimps on his crew. So progressive.


While a party rages in the bingo hall/ballroom, a mysterious vessel under the power of unseen forces is on a collision course with the ship.  Despite the crew’s valiant efforts, the cruise liner is sunk when the ship rams into the lower decks where apparently all the stock footage is stored.  The next day, a raft carrying Marshall’s family, First Mate Nick (Mancuso), his sultry girlfriend Lori (Burgoyne), lounge singer Jackie (Rubinek), elderly passenger Sylvia (Reid), and the fished-out Ashland encounters the eerie ship in open water. 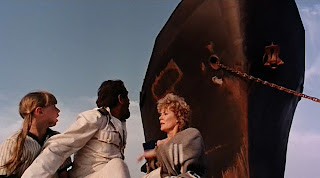 
The survivors board the ship but find no one and nothing but Nazi paraphernalia, eerie World War II-era music resounding in the hull, and peppermint candy that causes fatal acne.  When Jackie is scrimshawed* to Davy Jone’s Locker unceremoniously before he even has the chance to be annoying, the gang heads indoors for safety.  Poor schmucks.  Almost immediately, whatever sinister power is commandeering the ship also takes control of Ashland who fantasizes about choking sailors and descends into madness, delusion, and the constant need to lie down. 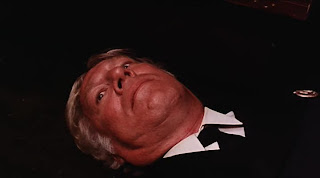 “I’ll just lie here and wait for the Zuckers’ callback.”


While the survivors start to drop faster than pants at a Tailhook convention**, Marshall and Nick discover the ship was used for brutal interrogation by the Nazis, operates on human blood and could be haunted by the victims and torturers alike. 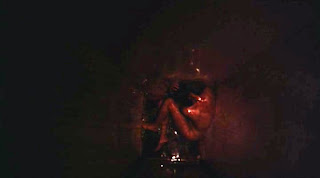 Unfortunately, bloodbaths do not exfoliate.

No evil seamen has caused this much havoc since Robert Kardashian.  Needless to say, it’s time to abandon the fuck off the Death Ship.

*Yeah, I don’t what it means either.

**NOTE: Tremendo Time is committed to references older than your Grandpa’s aftershave.


I remember seeing the Death Ship VHS box many times during trips to the video store in years past.  I always thought it looked cheesy so I never picked it up.  A haunted boat that kills people?  “Guffaw!” said young, stupid El Tremendo.  Recently, after recalling ship-related horror movies like Triangle, Ghost Ship, and The Rig, I remembered Death Ship and it turns out my 1988 judgment of that video cover was hasty.  While it takes its time getting there, the movie is an eerie, disturbing ride.  The rusty, oily, claustrophobic atmospheric sets in slowly but once the mayhem begins, the feeling of an inescapable almost cosmic doom grabs hold. 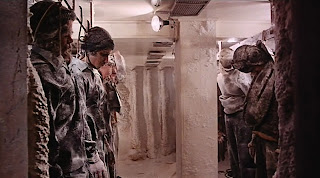 The Nazi Victims were hung in the galley with care…


I don’t know, there’s something about 70s and 80s movies that made your skin crawl and increased your chances to look away or at least leave the room for a minute.  It’s an indescribable, palpable feeling that’s missing in most horror movies of the last twenty years.  Could it be that current viewers are too conscious that they’re watching a horror movie and have come to expect the scares and know the rules?  Are advances in technology and aesthetics diluting the ability to cinematically terrorize?  It’s not that Death Ship was any more innovative or competent than any of its contemporaries or descendants (it’s still kinda silly in parts), it just has this atmosphere unique to its time that was really effective in conveying disaster and fatal destiny.  Death Ship is an underrated hallmark in the nautical horror tradition, and should you see it drop anchor near you, don’t be young and stupid and miss it.
at 11:27 AM