Mousey plain Jane (Van Devere) is struggling with the recent loss of her mother and a painful divorce which resulted in mental breakdown.  She seeks solace and healing in the country home of her deceased aunt which she inherited in her mother’s will.  She travels to the sleepy town of Blackford where every male drives like a jerk, salivates over her like a bug-eyed cartoon wolf, and carries on like she’s Cheryl Tiegs. 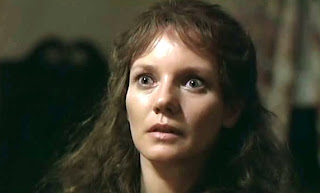 
But the soothing bucolic splendor of sexual harassment is abruptly broken up by the presence of a creepy black hearse that follows Jane, frequently sideswiping her because she is constantly driving at night. 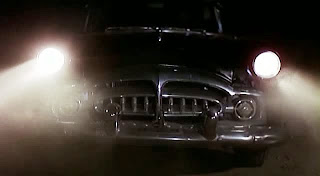 I accuse this hearse of heresy down the Hershey Highway!


Jane’s therapeutic getaway sinks further to shit fail as the townsfolk treat her like crap and she begins to see the ghost of her dead aunt poking around the house.  And worst, she’s harassed by boozy realtor Walter (Cotten), condescending Reverend Winston (Hotton), and leering deviant Sheriff Denton (Flory) who all think she’s nuts. 
When visited by Walter, who in consultation with Scooby Doo plots to scare Jane away so he can take over the house, she nonchalantly announces that she’s known all along that dear old dead Auntie was a Satanist who was in love with a handsome stranger but died suddenly.  And on the day of her funeral, the hearse carrying her body blew up over the town’s bridge.  Something for the family scrapbook I’m sure.  She then starts reading her Aunt’s diary and has disturbing dreams in which she is chased across the dark countryside and/or stars in a Bonnie Tyler video. 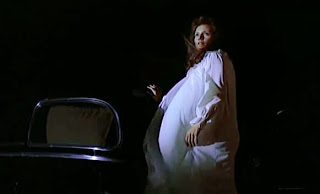 A total eclipse of my pants!


Also, the driver of the hearse walks the halls of her house, breaks windows and dishes, and appears to her in broad daylight. 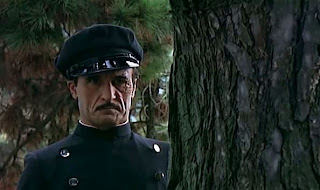 
But when things are looking bleak, a handsome stranger named Tom (Gautreaux) enters her life, romances and sweeps her off her feet, reassuring her that all her troubles will soon end.  But the strangeness continues and you can bet that there’s something far more ominous at work that will cure Jane's problems forever.  Probably the hearse’s gas bill. 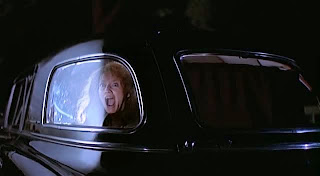 
The Hearse is not really an evil car movie per se, but more an atmospheric ghost story that slow burns creepily towards a confusing, lackluster resolution.  I mean, the hearse itself is evil I guess but its body count is nowhere near colleague evil cars The Car or Christine, (although it dents Jane’s Chevy Nova many, many times).  For the most part, the story is hackneyed with the forced hostility towards Jane lacking a clear motivation. Every character either wants to kill her or screw her, but we never really get to know why.  It probably would have helped to flashback to the Aunt and her beau’s satanic doings in the past.  The movie was Van Devere’s follow-up to The Changeling with husband George C. Scott, a far superior ghost story in every way, but being a trooper she invests in the character of Jane but appears to be the only character working with the material.  Cotten, who slummed around in low-budget fare in the last part of his life, runs through his lines while Gautreaux turns in a slick, spooky performance.  Visually, the hearse and the driver are the highlights but the film ends up fairly bloodless and low on scares.  The Hearse is not terrible or really unwatchable, but its terror mileage is certainly low. 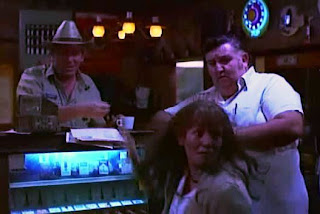 But, hell it’s got a cameo by Porky himself!