An old man visiting an old lady in her greenhouse is bitten by a bug when he touches a peculiar plant.  He chokes, passes out, and is soon rushed to the emergency room where he spits out a slimey worm.  His attending physician Dr. Carson (Walsh) is disturbed when his ailment soon spreads to anyone who was near him, causing alarm in the hospital and nervous tie-wringing from bad publicity-phobic administrator Mr. Levering (Vernon).  They isolate the worm for further study which is spewing green goo at an alarming rate. 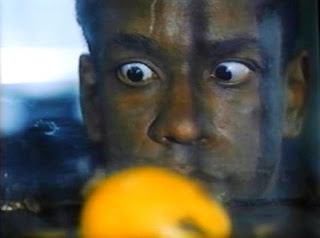 Feel free to insert your own racist joke here.


To make matters worse a wounded cop arrives with his panicked partner Bishop (Railsback) in tow, some wisenheimer sick kids run around causing mischief, and first-time parents The Bakers (Flaherty and Duke) arrive to have their baby and crack jokes about databases and menstruation. 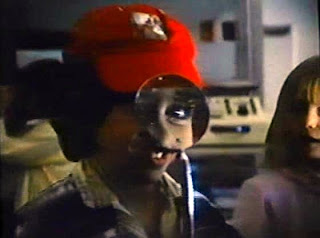 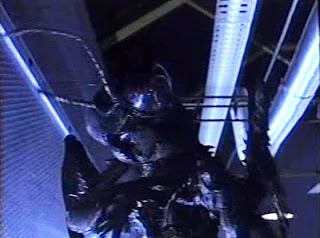 Thanks for ‘roids, kids!


As the situation worsens, she calls local etymologist Elliot (Lake) to help investigate the growing infection.  Meanwhile, the government has quarantined the hospital and an ominous Disease Control-type guy has given the Army orders to shoot anyone who leaves the building.  Bishop, Carson, and Elliot hatch a plot to lure the creature into an experimental laser operation room where they hope to slice and dice it. (NOTE: if you introduce a giant space laser in the first act, you have to use the giant space laser in the third act. First rule of Cinema, my friends.)

Our intrepid heroes, oh, and a guy who looks like the Cuban military leader in Red Dawn.


Meanwhile, more and more people are dying in the hospital due to infection, the government has ordered to incinerate the hospital if the bugs cannot be stopped, and the creature has nested in the boiler room where it (Elliot identifies it as a hermaphrodite) busily hatches eggs.  With the help of the kids who know every inch of the hospital, our heroes prepare for the final showdown with the Blue Monkey, which is neither blue nor a monkey*.


Blue Monkey is a fine, colorful, and fun homage to classic giant insect movies from the 50s mixed with 80s horror aesthetics and Canadian low-budget cinematic sensibilities (ie sorta TV-movie-ish).  Referencing everything from Them! to Aliens, the movie is an enjoyable outing balanced with scary action and comic relief.  The horror is delivered by an effective giant insect costuming and gory bug effects while the comedy comes from a Canadian heavy-hitters Flaherty and Duke (SCTV and SNL alums respectively) and the hilarious Lake (of Best in Show and Waiting for Guffman fame, amongst others), who here actually plays it rather straight but enthusiastically.  Railsback, who’s known for his angst-ridden roles in Helter Skelter and The Stunt Man, also plays it straight-faced and actually looks to want to be involved in the wacky buggy nonsense surrounding him. 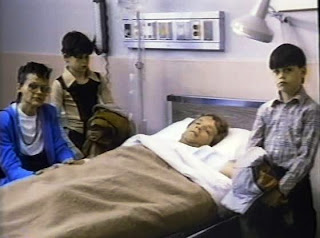 Bishop’s partner's vampire family thanks him for saving Dad.


I also really dug the strong female characters, particularly Walsh who although may be aping Aliens’ Ripley at time is nonetheless a thrill to watch.  Another treat was seeing a very young Sarah Polley (Dawn of the Dead, 2004) and searching for an alleged Helen Hunt cameo (didn’t find her). 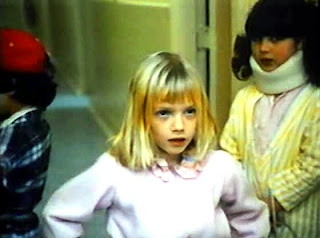 
So yeah, I really enjoyed Blue Monkey. The script is hurried but plausible, wasting no time on deep characterization but peppering the dialogue with what sounds like believable scientific jargon.  The soundtrack was your typical 80s synthesizer fest (not a bad thing, in doses) and the cinematography was above par. 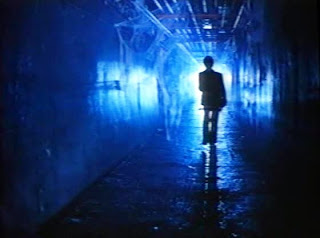 The director was in love with this shot.  Not bad.


Blue Monkey is a nasty little treat filled with cool monster action and light humor and good characters you kind of actually care about.  I can almost forgive the utter lack of a blue monkey.  Almost.

*I had to fast-forward through the movie again to figure out the title.  Turns out it’s a reference to brief line by one of kids who call the boogeyman “Blue Monkey”.  You can sleep now.