It’s the sweet, magnificent 1980s and aspiring filmmaker Fred (McDaniel) and his dim pal Warren (Lively, aka the original Vacation’s Rusty Griswold) need to come up with some cash quick to fund their latest horror epic.  All seems hopeless when the star actress and their child labor walk off the set.  But being the plucky young artistes, they still believe in the Hollywood dream. 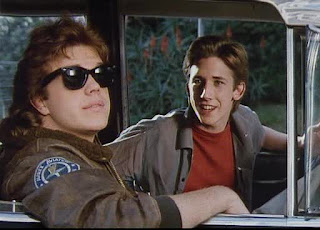 I guess even Scorcese & Kubrick started out butt-dumb

Their house is a treasure trove of movie posters, film props, masks, and boxes of cereal strewn everywhere. Unfortunately, the presence of all this cool stuff holds true in the 80s as it does now: it’s sex kryptonite.  But they do have an awesome doorbell. 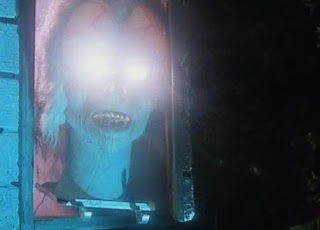 Good news arrives in the form of a letter that announces that Warren is now eligible to receive his late father’s inheritance.  Unfortunately, it turns out to be just a suitcase full of old stuff including a picture of Warren’s creepy old Grandpa (McNaughton) and a haunted clock.  That night, strange sounds and lights appear in their house while an eerie mist emanates from the clock.  Things get even weirder when film producer Stan Gordon (Gleason) hires a German goon (Lansink) to steal the suitcase from the guys. 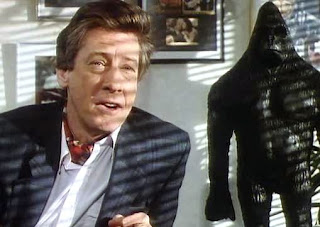 Gordon is remaking King Kong. Of course he is.

Fred starts having bad dreams about the clock and one night at exactly midnight the ghost of Grandpa’s butler appears to him.  The next day, he gets an idea for a movie and builds a replica of the little ghost he saw.  That night, the elderly ghost named Louis inhabits the animatronic copy of himself, walks around serving drinks, speaks with an English accent, and generally freaks everyone out. 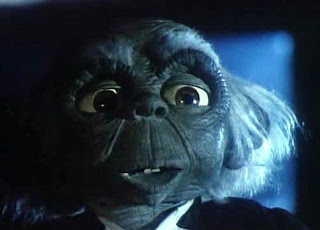 The guys and their struggling actress pal Laurie (Whitlow) learn from Louis that their Grandpa’s house holds the vengeful Grandpa’s secret fortune.  Unfortunately the house is still inside the Hollywood studio of evil Stan Gordon who is also keen on the money as his family grifted Grandpa years ago.  So the gang hatches a plot to infiltrate the studio, take the cash that’s rightfully Warren’s for some reason, and wait for the director’s royalty check to Scooby Doo to clear. 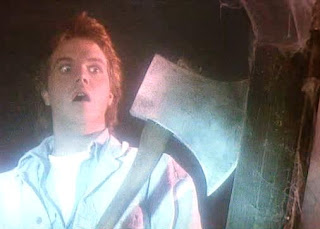 Every film director has an early embarrassment.  Kubrick has Killer’s Kiss.  Coppola has Dementia 13. Roland Emmerich has everything except maybe The Patriot.  He also has 1987’s Ghost Chase, a K-Tel Presents greatest hits mix of other 80s movies like Ghostbusters, Weird Science, Gremlins, and Name-Your-Teen-Sex-Comedy-Here.  Despite everything the movie references and despite all the glorious awfulness to be found here, there’s nothing much to say other than the movie is a fairly generic horror teen comedy that elicits moments of nostalgic sighs and few surprises.  I guess can just go ahead and catalog all the wonderful 80s misery I discovered: 1) Minimalist animated credit sequence (ie a pair of googly eyes). 2) Standard but unrecognizable 80s pop music.  There’s a song called “Imagination” that’s repeatedly played over scene after scene, ironically.  3) Loads of German crew members.  4) Many classic posters including Frankenstein, Friday the 13th, and King Kong Lives.  Ahem.  5) Shots of unrecognizable Hollywood and Sunset (the pictured Denny’s, pizza joint, and hooker corners no longer exist). 6) Product placement: Morton’s, Smuckers, Puffed Rice, Raisin Bran, Beer on Cornflakes.  7) Paul Gleason in a lovely scarf (R.I.P.). 8) Roland Emmerich in tears. The saddest thing, however, is seeing legendary Monty Python’s Flying Circus director McNaughton ham it up as Grandpa’s ghost.  Weird.  But all cheesiness aside, it does have one very special thing going for it: 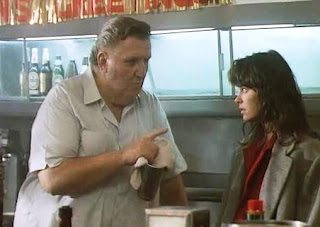 ANOTHER appearance by Porky!
at 5:00 AM