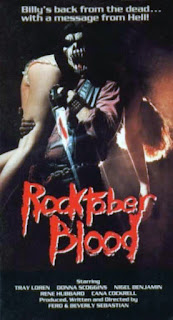 Rocktober Blood is a fairly heinous assault on your 80s slasher senses, and I don't mean in a heinous-is-good kind of way.  One of several metal maniac horror flicks that (probably) tried to profit off the heavy metal/Satanism paranoia of the time, the movie aims for somewhere between the Slipknot/GWAR grotesqueness of Neon Maniacs and the very watchable antics of Gene Simmons and Ozzy Osbourne in Trick Or Treat.  Instead, this very low budget and poorly lit flick struggles to stay within the company of the fascinatingly weird oeuvre of Jon Mikl Thor and the putrid no-budget wallowing of Hard Rock Zombies.  Lead Tray Loren as the immensely punchable Billy Eyes succeeds in douchey exaltation as the other mumbling actors try their best to remember they're still in a movie.  Basically, it's as if someone was stalking the cast of Heavy Metal Parking Lot.  The music is somewhat infectious and not completely horrible, especially Lynn's signature tune "Rainbow Eyes".  But it's been like 20 minutes since I finished the movie and that earworm appears to have dried up.  Unfortunately, the heavy metal massacre genre also appears to have dissipated, much like studded leather pants swaying on a clothesline in the heavy metal rest home of our bad movie memory.
at 12:00 AM No comments: