On the twenty-fourth day of Halloween, my boo love gave to me ... twenty four Jaded albums! 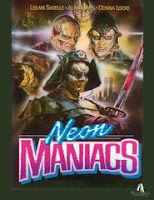 A fisherman finds some playing cards lodged in a cow skull. The cards feature gruesome ghoulish paintings of strange characters that may or may not be our title characters. Someone with a hatred of breaded fish fillets comes up behind him and gives him the axe. A scream! A shot of the San Francisco skyline! A cheesy 80s synthesizer-backed credit sequence! And we cut to Natalie, a recently jilted teen queen out on a night on the town with her doofy airhead friends in complementary stoner van. They stop at a liquor store and run into misfit Steve who's obviously in love with Natalie. They blow the dork off and head over to the park for teen nastiness. The horny teens camp out, drink, and bone each other while sad Natalie talks about her feelings with some other slut. Out of the darkness emerge the characters seen in the cards earlier: a zombie samurai, an undead cop, an electrical dude, a feral animal guy, and a one-eyed snake. Yes, a one-eyed snake. What, no trouser pilot? All the kids dies horribly except for Natalie who's saved by the cops who have missed the mayhem. The police don't believe Natalie's story because the bodies are gone. She is shunned and ridiculed at school and Steve takes full advantage of her vulnerability and asks her out. Meanwhile, a snotty girl filmmaker-wannabe catches a whiff of Natalie's story and wants to know the truth. She bothers Natalie with questions, snoops around the crime scene, and harasses big black cops. She learns that the maniacs live under the Golden Gate bridge, are unstoppable killers, and are not the most hygienic bunch of bachelors. Film geek girl teams up with schmucky Steve and Natalie to stop them, but first it's Battle of the Bands time! The final showdown with the scary neon dudes goes down at the high school Halloween concert where Steve's pussy rock band goes up against sheet metal giants Jaded. Big dude hair! Incompetent guitar and vocals! Men in makeup! JADED! And thus, the true horrific spectacle begins.

Neon Maniacs is a horror movie revelation, and not because it's any good, makes any sense, or provides even a minute sliver of fright, but because it proves without a doubt that the 80s was the cheesiest decade in the history of man. Nah, I won't give it all that credit. I guess I'm still in shock because I'd never heard of this film until some fat sap on YouTube recommended it. And I really trusted said fat sap, until I saw this shockingly bad and belly-busting hilarious clunker of a movie. In truth, Neon Maniacs is all I expected: goofy fun wrapped in an awkward, poorly shot, nonsensical wrapper. And I ate up all its nutty goodness in under ninety minutes. That's good eatin'. At times the movie is achingly hilarious with the big hair, loud New Wave jackets, and C-3PO's cereal. The origin of the title characters goes unexplained as they ham it up like Shatner at Karaoke. Equally comical is the revelation of their only weakness: water. You could almost hear eight-year-old M. Night Shyamalan popping a boner at the sight of that. The acting is about what you'd expect, and although the maniacs' design is pretty cool in a bad amusement park mascot kind of way, there is a serious lack of gore besides a couple of appendage detachments and stabbings. Although the spirit is in fun and they went for humor instead of scares, they forget to include actual jokes. There are also shocking and nostalgic images such as the unnerving appearance of Michael Jackson murals, Alien ball caps, Star Wars references, and fat guys eating bologna and walking their dogs in bunny slippers. Maniacs has got it all. I just wish I was eleven again so I could have really loved this movie, instead of just mildly amused by it.