On the eighteenth day of Halloween, my boo love gave to me ... eighteen A-pluses ... in murder!

Two horny alcoholic teenagers make out in a convertible on a grainy, dimly-lit street. They sort out their relationship difficulties in a three-second conversation and then get down to business. Before you know it, some dude in Chugga boots interrupts the coitus and offs them with superhuman strength. The next day, the campus is mildly shocked at last night's events. Cut to a chemistry class final exam (hence the title) and we are introduced to an Advertising major with low morals (shocking!), a hateful loudmouth jock named Wildman, a Laraine Newman lookalike Brainiac, a world-weary Professor, and a morbid nerd with an encyclopedic knowledge of mass murder named Radish. Yep, Radish. Like any good scholar, the Prof is fooling around with one of his students, a young airhead hotty named Lisa. Meanwhile, the obligatory black van stalks the campus. But instead of our superhuman killer who's quickly becoming the most beloved character twenty minutes into this thing, the van is actually filled with armed masked gunmen who blow away students on the front lawn. Awwwkwaaard. Well, it turns out to be a fraternity prank that, um, probably wouldn't go over too well today, but was funny as shit in 1981. The distraction allows the Mad Man wanna-be to cheat on his exam. A gum-chewing Sheriff who definitely fails to communicate shows up and hassles our massacre-loving pranksters and vows to keep an eye out. Later, we discover that Lisa and Brainiac are roommates and Brainy is getting frustrated at Lisa's good and easy life. Brainy confides in Radish and the pair form a burgeoning romantic partnership, despite the fact Radish is gayer than ballerina night at a West Hollywood piano bar. Wildman and Advertising guy harass Radish for calling the cops and promise to make finals week even more stressful. So some other pranks are pulled, big-haired Advertising guy and Wildman plot to steal drugs, Brainy gets more depressed setting up her final girl turn, and I worry that our slasher will never show up. My frets don't last long as our invincible Wrangler jean-wearing maniac magically appears to clean (frat) house, cut class, boost his Grave Point Average, and other lame college kid-killing puns.

Continuing my nostalgic trek into 80s horror comes this teen slasher that took forever to make it to DVD, and maybe it should have taken a little longer. The movie was unoriginal, boring and very predictable. Sure it came out at the dawn of 80s slashers, just as early releases were laying out the parameters for the genre, but that doesn't excuse its utter lameness. On a positive note, the movie is not slow, some scenes and dialog are enjoyable for their laugh-out-loud awfulness, and the characters are completely unlikable which feeds the viewers' lust for a speedy, bloody end. Final Exam borrows much from its contemporaries such as the Halloween-inspired soundtrack and the Friday The 13th death scenes. Director Jimmy Huston, son of John Huston, is less than inspiring at moving along the bare plot, and it would have been interesting if he'd learned anything from Pops. The killer's motives and origins are left unexplained and he's just dumped upon the campus as an indestructible, quick as the wind, empty homicidal android. But on the plus side, he looked like one of the Daryls from Newhart: 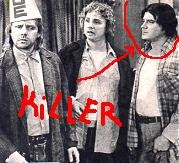 The DVD has interviews with the cast of the film. I watched the one with the guy who played Radish in hopes that he would out himself, or at least admit that he banged that asshole Wildman. But, it's a by-the-numbers “We shot it here and had a good time”, and “Everyone was wonderful”, and “I am so ashamed” deal. Final Exam is pretty standard work, no fancy cinematography, passable acting, and a sad lack of gore. I guess horror fanatics will enjoy its reemergence from VHS obscurity, and it does have that bad 80s charm that makes you feel so warm inside. Just like being strangled by parachute pants.