The far future. Mankind has finally mastered space travel. We have light speed engines. We can survive in deadly conditions for long periods of time. We can explore our galaxy for alternative energy sources.  Yet we somehow can’t get over our attraction to glowing things.  Such is the dilemma of the USS Subtly-Titled Pandora which is returning to Earth after a successful salvage mission, carrying a very powerful but very menacing Green Glowing Thing (GGT). 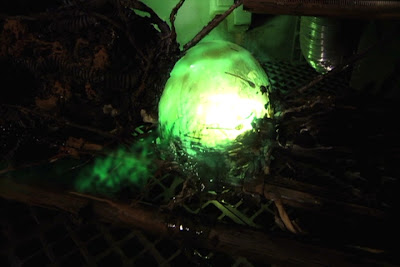 
They theorize that the GGT may be a source of incredible power and plan to sell it to the highest bidders when they get back home.  But tragedy struck during the mission when the Captain was killed in an accident, leaving distrusted but adorable Holloway (Zibolis) in charge. 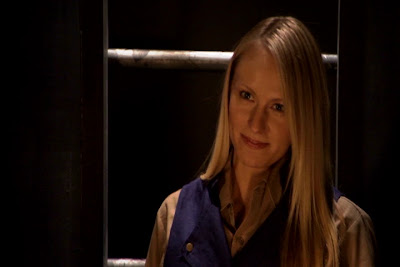 “Does anyone else have problems with split ends in zero-G?”


The crew of the Pandora totally disrespects Holloway and questions her every decision.  Fortunately she has super-strong synthoid robot guy Traver (Railsback) on her side. 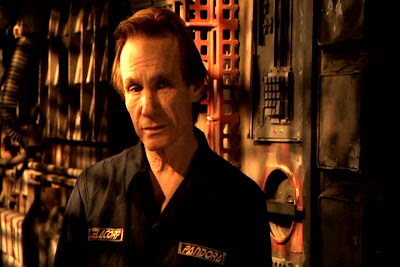 
When the ship answers a distress call, they dock with a hospital ship carrying traumatized nurses who claim they’ve survived a vicious attack by space pirates. 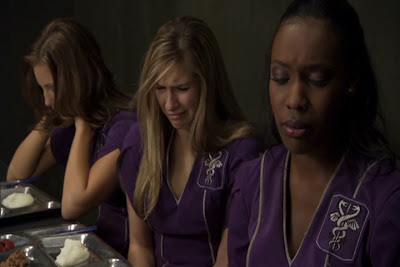 “And we missed three episodes of Gossip Girl!”


But it’s all a ruse as the gals seduce the men and assault the women in order to steal the cargo for themselves.  But the GGT is acting rather strange, being more greeny and glowy-er than usual.  In fact, it’s transforming all who touch it into rampaging zombies! 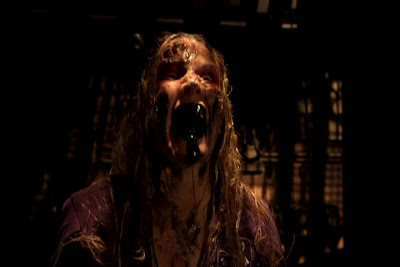 Hi, this is Nola (Skewes).  She’s just risen from the dead.  Just like NOLA.


And they start picking off the crew one by one, transforming their victims into the nasty undead as well. 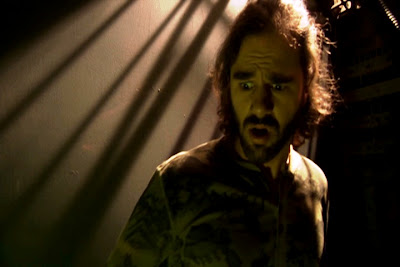 Colin Farrell in a role that may surprise you.


But these particular plaguers don’t play-guer by the rules and instead of spreading the zombie disease the good ol’ fashion eat-your-guts kind of way, it delivers the virus through a booger transfusion. 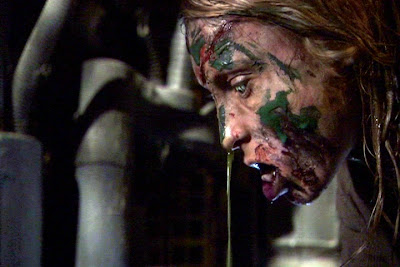 Moist Kleenex of the Living Dead 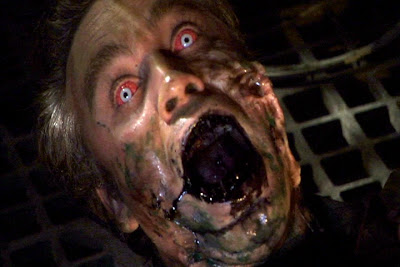 
The epidemic overcomes the ship and the bad girls must join forces with the Pandora crew and their elderly robot-boy to survive the ordeal. 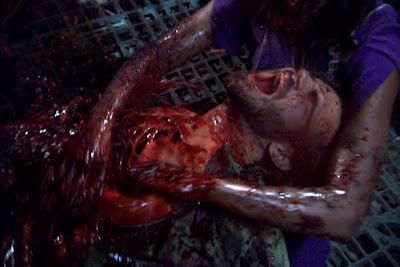 And not get Pilato-ed to death.


Brad Sykes is a masterful low-budget filmmaker working on his craft for the last two decades.  The man is a direct-to-video factory whose aspirations aim for the Moon but in the end usually delivers no further than the weather vane.  In Plaguers, Sykes explores the science fiction/horror hybrid subgenre by melding Alien, the Dead films, and perhaps a dash of the Dead Space video game franchise in a space soap opera with zombies.  Perhaps his most ambitious film to date, the movie unfortunately doesn’t disappoint in the being disappointing department.  There’s no doubt about it, the movie is terrible.  Sometimes achingly terrible.  But it’s not without appeal.  Yes, it’s low budget. Yes, it’s hackneyed and filled with half-baked ideas, obvious references, and bad acting.  Yes, it’s unintentionally sorrowful at times.  (I dare you to look into Railsback’s eyes and not avert your gaze from a void of sadness).  But it’s not inept, it’s not horribly paced, and it’s definitely not without a sense of fun. The action, which included overly fake guns, misfiring squibs, and Railsback arthritically worming through air vents, is hysterical.  The zombie effects and creature make-up were definitely solid.  The gore kind of outstanding at times.  And the main monster was, well I’ll just leave it to your imagination. 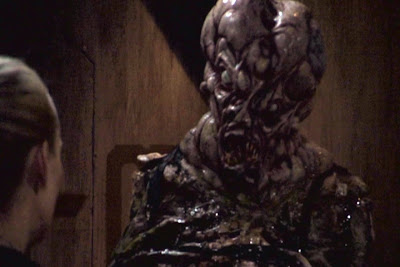 
So yeah, Plaguers is fun and not boring.  It could easily occupy the mid-card on any all-night horror marathon, something to relax and laugh at until the bloodletting is turned to 11.  Well, at least that’s how I schedule my horror-a-thons.  As for Sykes, I hope he continues to churn out his made-on-the cheap hokum.  Keeps this little miserable blog in business.  Plus the man loved Alien and you can’t knock a guy for screaming in space, knowing full well no one can hear him.
at 3:00 AM