Huub “The One Guy” Stapel, Willeke "The One Gal" van Ammelrooy, and um, more Dutch people than a Vermeer print fire sale.

An office building in the Netherlands is home to the Restaurant Icarus atop its penthouse floor.  One night, four obnoxious drunks narrowly suffocate to death in an elevator after a night of shooting back gin and obsessing about crops.  Dutch oven joke should go here. Said elevator became trapped in between floors and did not respond to controls and appeared to be under the influence of an unknown power.  Baffled by the near fatal accident, the building staff consults elevator repairman Felix (Stapel) to fix the problem. 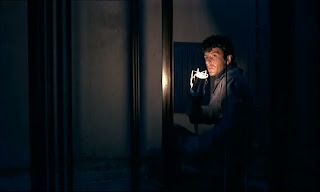 Searching for things that go BING! in the night.


Despite double and triple-checking, the elevators continue to malfunction, taking victims in myriad horrific ways. 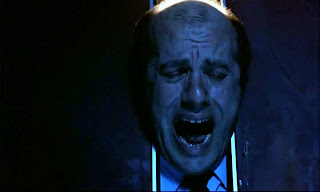 
While the staff engages in various sexual hijinks and Felix becomes obsessed with the case and increasingly detached from his wife and family, the elevator continues its massacre with zero discretion.


With the help of a female journalist (van Ammelrooy), Felix uncovers the puzzling fate of the man who previously maintained the elevator and discovers that he went insane and was institutionalized. He tracks him down at the nuthouse but he’s little help. 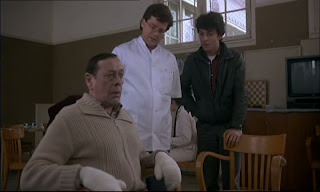 The sight of pudding dripping from the walls is ghastly.  (Sorry, off-screen).


The journalist tracks down a brainy computer expert who postulates the theory that the elevator’s computer chips have been compromised and made self-aware with the desire to kill people. Chips haven’t performed this much intestinal damage since Olestra.  As if sensing Felix is close to stopping its malevolent ways, the elevator steps up its murderous game. 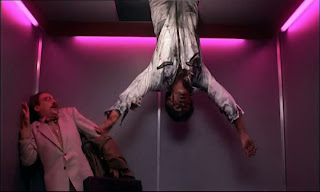 Felix confirms the prof’s theory of the elevator's sentience and grouchiness when he finds a very much breathing and a very slimy chip control panel inside of it. 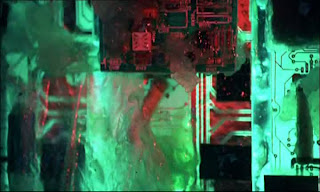 Was this triggered when the chip said, “I don’t know”?


Felix arrives at a crossroads.  His family has abandoned him.  His employer distrusts him.  People are being chopped up around him while the elevator mocks him and his unkempt hair. If Felix can summon the will, the audacity, and the gallantry to stop the massacre, the lift's days are numbered. Oh and a wrench might help too.


The non-vehicular inanimate object as killer sub-genre, much like its four-wheeled cousin, is one that is much maligned and dismissed.  The general impression that all these kinds of movies are terrible is inaccurate as both good and bad can be discovered if you look hard enough.  For every Death Bed: The Bed That Eats (it does) or Battle Heater: Kotatsu (yes, a killer heater) there is a Pin (killer mannequin) or Magic (killer ventriloquist dummy), the latter two solid suspenseful stories, the former, well not so much (but still a hell of a lot of fun).  In light of a truly ridiculous premise, The Lift is actually a neatly crafted thriller that’s played so straight-faced that you may not even care that in the end it’s about an elevator that kills people wantonly.  An odd charm pervades the proceedings, enough to admire even though the film’s tone shifts schizophrenically from ludicrous family drama to conspiratorial intrigue (we learn that the elevator’s devilish mechanization was designed by a twisted scientist) to mad as a shithouse full of burning wooden shoes.  But the real star is the comical and maybe not so accurate dubbing in the American release. Samples of weird dialogue include “Brain doctor, he used to be OK”, “I used to work Vice Squad. You get numb. It’s a pity”, “[He] picked up a girl on the street, took her to his place and gave her a sleeping pill so she'd keep quiet. Then he went to work with a drill, Black & Decker I think”, and the immortal “If I were an imbecile, [LONG PAUSE] and I’m not…”.  Also early 80s Dutch parenting is a sight to behold. Felix openly calls his son stupid. A woman slaps the sass out of her daughter’s mouth after the girl survives near consuming by the elevator.  And a mother tells her daughter she will grow breasts if she sits down and shuts up.  Poetry.  Thanks to director Dick “the Maaster” Maas, we get plenty of gritty elevator tech talk accented with enough computer chip conspiracy theories to grow back Jesse Ventura’s hair.  In the end the movie is surprisingly appealing and technically well-made with an effective culmination in the final showdown.  Maas remade his film (of course he did) as 2001’s Down (aka The Shaft) which I can’t wait to see because this month’s selection of films have had its. … wait for it … ups and downs.  GAHHHHH!!! 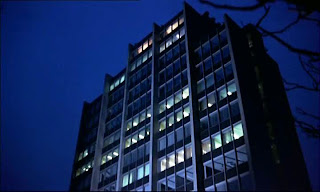 Rushing to pump out my killer insurance building flick!
at 5:00 AM