Somewhere in Spain, mid-80s, Christmastime. A group of horror-movie obsessed kids find a prone body in a Santa suit lying in an abandoned well in the forest. The body turns out to be a woman with a severely injured leg who slowly regains consciousness. The kids half-heartedly attempt to rescue the woman, half-heartedly contact the police, and half-heartedly feel any kind of sympathy for her, well except for whole-hearted Moni, the only girl in this motley bratty crew who actually feels some compassion. 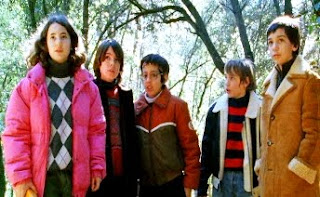 Los Goonies.
The naughty little shits include Koldo who has a soft spot for Moni, Ralph Macchio-obsessed Tito, and cruel ruffians Peti and Eugenio. They soon discover that the woman actually a criminal on the run from the police using the Santa garb as disguise after robbing a bank. 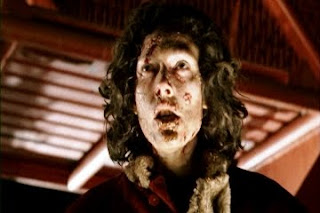 Mrs. Claus on the Verge of A Nervous Breakdown
After dousing her with Fanta and feeding her terrible Spanish cookies, the kids hatch a plot to exploit the situation and force the woman, who’s named Rebeca (Maru Valdivielso), into coughing up the loot she stole in exchange for her freedom. So they berate her. And starve her. And generally act like little dicks. Moni is the only one uncomfortable with the situation and tries to make things comfortable for Rebeca despite the other kids’ cruel taunts. Days pass, Christmas comes and goes, and the near-death Rebeca finally cracks and gives up the money which she used to stuff her Santa suit, but the kids take a long time to decide whether or not to release her. When the kids return to the well, it’s empty. 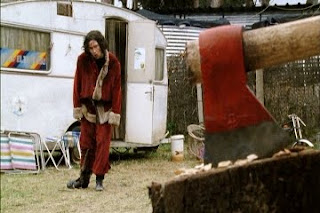 Presents aren't the only things getting opened this X-mas.
A decimated Rebeca has risen from the well with a renewed bloodlust and chases the kids around a miniature amusement park that plays terrible Euro-disco where these little greedy Spaniards are about to learn the true meaning of an X-mas stalking.

Director Paco Plaza is best known for the taut and inventive zombie thriller [REC] which was remade in the U.S. as Quarantine. The effort prior to his break-out hit was this X-mas-set “kiddy” movie Cuento De Navidad (An X-mas Tale), an unsettling mixture of twisted thriller, 80s nostalgia callback, and episode of Amazing Stories if directed by Michael Haneke. The movie is disquieting for one central reason: the children are morally repugnant, even the ones that try to reverse the harm they heap upon the poor woman in the well. So this makes it especially difficult to identify with their dire dilemma as they are chased around the park Home Alone-style doing physical comedy shtick. The movie is not really gory or really scary, but does possess the disquieting ability to make you squirm and pray for the horrible deaths of ten-year olds, much like the holiday season itself. Plaza also inserts an amusing movie-within-a-movie, an homage to European horror of the 60s and 70s and maybe just more than a little nod to Italian zombie movies, that’s actually better and more interesting than the actual movie (isn’t that almost always the truth with movies-within-a-movie? Someone should make a list). Despite the upsetting kiddy-terror, Cuento De Navidad is pretty entertaining, thankfully short, and features a warped but rewarding ending that you could definitely see coming but was satisfying nonetheless.
at 12:56 PM