X-mas morning, a time for families to bask in the warmth of the giving feeling of the holiday season. It’s a time for Moms to enjoy the laughter and joy of her children. It’s a time for kids to open wrapped wonders they oh so deserve. And it’s a time for Dads to nail the Swedish maid and then get mutilated by a paring knife. And that’s exactly what happens one X-mas morn in the home of mother Mary (Felissa Rose), daughters Taylor (Monique La Barr) and Noel (Leah Grimsson), and unstable son Devin (Samuel Nathan Hoffmine). 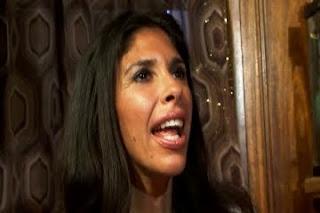 Mom Mary - Felissa Rose of Sleepaway Camp fame. Cameraman: please don’t tilt down!
Young Devin is accused of the crime and is sent to the nuthouse while Taylor is traumatized for life. Fifteen years later, Mary is a struggling single mother still haunted by the crime, Taylor is an aspiring Jesus play director, and little Noel is a coke-snorting slut. Mary goes to visit Devin during X-mas in the hopes of reconnecting with her maniac offspring. 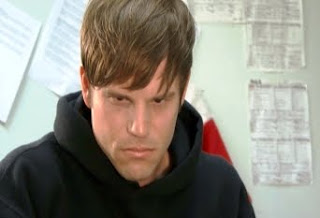 Our pouty killer would have chewed the scenery if they could have afforded scenery.
But Devin’s not budging, and his increasing psychotic nature enables him to bust out of the hospital to apparently continue his seasonal slaying. The first victims are two potheads that were extras in Taylor’s play. Meanwhile, Noel is in denial about everything from her father’s death, to her brother’s insanity, to her spread ‘em like margarine sexuality. So naturally the next victim is Noel’s good-natured doormat boyfriend. 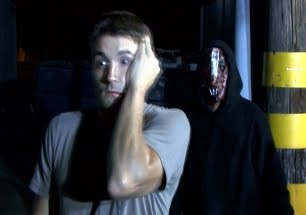 This dude’s spastic death scene was worth the price of the rental.
And then follows…well, lots of talking. And more talking. And additional TALKING. An inept detective enters the fray and does stuff but with all the TALKING it’s difficult to say whether or not he got anywhere. In the end there is like, a fifteen minute conversation / confrontation between Mary, Taylor, Noel, and the demented Devin and you’ll be able to see the “twist” ending coming like a Macy’s Santa marching down Park Avenue while a porking a red-assed baboon in reindeer antlers.

Cheapo homemade feature-length movies do have a place in film-watching society, albeit mostly to mock, serve as background noise, or to simply howl at in fast food or booze fueled delirium. And they are all pretty much awful. However, I have found exceptions like the poop monster epic Monsturd and a few others. These are the better homemade, micro-budget cinematic epics, made by folks who don’t take themselves seriously, know their spoofy place and cross boundaries of good taste skillfully, and are a chuckling wonder when discovered. Deadly Little Christmas is decidedly one of the awful ones, a jumbled mess of amateurism, mimicry, ineptitude and worst of all, boredom. The script appears to be improvised on the fly as characters say things three times constantly. For example, the detective gives Taylor his phone number and says (paraphrased) “You have my number. Call me if you need anything because you have my number. I can be reached anytime. Just call my phone number, which you have.” David Mamet couldn’t have put it better, well unless he’d just had an aneurism. And the acting, oh Jesus the acting. Eighties horror icon Rose plays Mary more ham-fisted than Porky Pig’s honeymoon. The rest of the cast is forgettable, each of them wallowing in bewildered states of confusion. None of the obvious Halloween-inspired plotline is explored in any great depth or utilized for scare. Characters just show up at places and say things. People get stabbed with a rubber knife while Casio music drowns out their screams. The murders aren’t even addressed by the characters and the threat of Devin returning home to continue the mayhem is played out like an afterthought. There is a scant trace of enjoyment to be found here but it’s all too brief, drowned out by the shoddy craftsmanship, illogical motivations, bizarre dialogue, and the sad whimpering of Baby Jesus crying. On His birthday even!
at 8:31 AM