WHAT THE MONSTER TAUGHT ME: We’re going to need bigger Depends.

Loads of tuba on the soundtrack; the poopy zygote; uncalled for dummy beating; Sheriff McDrunky; Deputies Abutt and Crapstello; the curious absence of Mr. Whipple; an image of the screenwriter passing out after the 1,000th shit joke; an evil Stern without a lackey Robin; Marlon Brando-sized supply of chocolate pudding, the sound of Michael Bay kicking himself in the distance; and one cruel stool, a naughty potty, and the biggest talking shit since Rush Limbaugh.

A creature made of feces is unleashed upon the Earth by the folly of man and his chronic stubbornness to wipe properly. The toilet terror begins when Butte County (yuk-yuk) is threatened by the escape of serial killer Jack Schmidt (yuk-yuk) from prison. The FBI and the local inept Sheriff chase Jack into the sewer where he is consumed by a chemical that dissolves him to peanuts and corn. But the substance has also reanimated his corpse, and voila - a shit monster is on the loose (bowels). But for once, the Del Taco can’t be blamed. Turns out that the evil chemist Dr. Stern dumped the experimental chemical into the water system to see what kind of shitstorm he could stir up. Unfortunately no one believes the Sheriff’s warning and soon the body count starts rising like the line to the crapper at Cinco de Mayo. Left to contend with the mucky menace is a sexy FBI agent, the very thirsty Sheriff, and his two mildly retarded deputies… 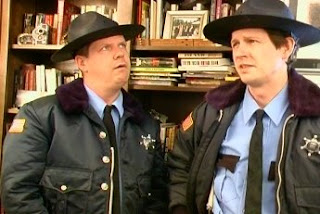 Just defecates, ma’am.
…to warn the populace before the county’s annual chili cook-off begins. And not even a police sketch of the creature is enough to drive the hungry citizens from their precious chili beans: 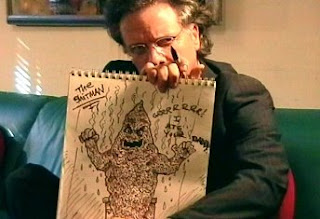 So it’ll have to be up to our heroes to gather the strength, courage, and stomach to flush this crappy creature into the hellish one-eyed craphole that spawned him.

Since starting this blog, I have st through some pretty horrendous homemade, low-budget, and independent movies like this one, and this one, and this one where the director himself took issue with my opinion of his magnum opus. But now I have to contend with a magnum o-P.U.-s in the form of a homemade, low-budget, and independent movie called Monsturd. My dearest family, closest friends and army of lovers would be the first to point out that a movie about a monster made of shit and script with more poop jokes than a 9-year-old’s birthday party was made especially for me and my immature affection for toilet humor. And for the most part they’re right. But my expectations were extraordinarily low when I first started this movie, expecting complete incompetence, insipid jokes, and cringe-worthy dialogue. I mean, the movie is called MONSTURD for Christ’s sake! But I laughed a whole lot and in all the right places – the juvenile poop jokes, the extremely low brow humor, and the guy in a shit costume. The guys who made the film star as the Deputies mentioned above and they are hysterical in a most lousy but lovable way, and my enjoyment was bolstered by the fact that everyone looked like they were having fun despite the poo-flinging. Monsturd was not made for your hoity-toity cinema-elitist friend or the cultural intelligentsia with a redwood stuck up their collective hoo-hah. It was made to sit around the TV with your shithead friends to howl and chuckle at as your life slowly swirls down the crapper. Not so much artsy, but a whole lot of fartsy. 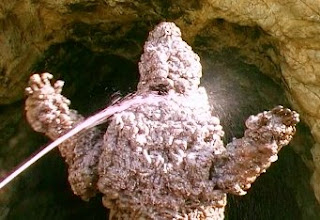 I just wanted to drop you a note to say thanks for taking the time to watch and review our flick “Monsturd.” Glad you got a chuckle or two out of it. Your review had me cracking up. I love the “Not so much artsy, but a whole lot of fartsy” closer. If you get a chance, you might want to check out the sequel. It’s called RetarDEAD and it takes place the day after Monsturd. Same town, same cast of characters. But this time, instead of battling a giant poop monster, the sheriff and his dip-$#@! Deputies fend off a zombie plague. It’s on NetFlix.
-Rick Popko
(co-writer, director and producer of Monsturd and RetarDEAD)

Thanks for dropping by and leaving a comment. I'll be doing Zombie Movies for October's theme and RetarDEAD is at the top of the list!