The Japompadour, Hopalong Yakamoto, the BMX Bandits from the Dark Side of the Moon, Battle of Poon Tang Hill, Mogera: the Rodney Dangerfield of Japanese Monsters, a silly accent translator, a guarantee you’ll cry more than 96 tears, and timeless, sagely advice: “It is cold inside, so please wear a cape!”.

A Japanese village is laid to waste by an unseen force and the military and its scientists are called into action. Meanwhile, sullen astronomer Shiraishi (Yumi Shirakawa) has foreseen an invasion by lifeforms from the planet Mysteriod, but no one – not even his mentor Dr. Adachi (Takashi Shimura) or best friend Atsumi (Kenjii Sahara) – believe him. Well, believe this, suckers – Mogera the badass evil robot with death rays for peepers emerges from a mountainside and starts picking off Japanese soldiers like fat guys at Hometown Buffet. 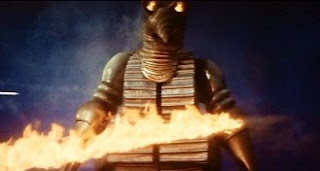 As luck would have it, the Mogster wasn’t designed to cross bridges so he’s made toast after two minutes of mayhem. But the real menace soon shows its face as The Mysterians from the planet Mysteriod in their Mysterio-mobile and loud Mystereo invade rural Japan with an ultimatum for Earth: give us what we want or you’ll get more Mogera buffoonery to laugh at. Oh yeah, and we’ll destroy all your cities with our Hoover vacuum motor/horrible radiation weapon. All the caped and snazzy-helmeted Mysterians want is a few acres of real estate to repopulate their dying race, some compassion and understanding, and ALL OUR WOMEN! Well, goshdarn it, the nations of the world unite against this cosmic cock-block and unleashes all our military hell machines upon the Mysterians but are no match for their sophisticated cartoon rays. But plucky Shiraishi manages to infiltrate our horndog enemy while Atsume and Dr. Adachi confer with the world’s greatest scientists to conclude that blowing the crap out of the Mysterians is the only way to stop the Earth from becoming a huge sausage fest.

The Mysterians is goofy sci-fi fun, a quick-paced romp with a militaristic theme that feels like a cornball comic book ideally suited for a sugary-cereal packed Saturday morning. The Mysterians outfits are pretty damned cool for those with ultra-cheesy taste. And if you’re not ultra-cheesy, what the hell are you doing reading Tremendo Time? Anyway the effects are about what you’d expect for an early period Japanese monster movie but the model work (tanks, airships, saucers, dopey Mogera) by Eiji Tsuburaya is typically outstanding. The Mysterians is a gift from heaven for monster movie fans, but elitist types (you know who you are) might enjoy it too if they can take that stick out of their butts for ninety minutes.

Master filmmaker Akira Kurosawa and The Mysterians director Ishiro Honda were lifetime friends. They are two great artists who could have not have had more dissimilar career paths.

Kurosawa in the world of film art and visceral drama, Honda in the world of fantasy and science fiction. Both men are gone now, leaving a legacy of cinematic achievements that should never be forgotten. In my version of film geek heaven, I can imagine the following conversation taking place.

HONDA: Hey, I saw you at the chocolate waterfall earlier talking to Stanley, Alfred, and Ingmar. What was that all about?

KUROSAWA: Well, I am working on a novel and I’m struggling with the existential dilemma of a disillusioned samurai who forsook his family ties for a dishonorable master and seeks Zen and redemption after a life of bloodshed.

KUROSAWA: And then there’s the script about the crumbling Japanese middle class family tortured by the dehumanization of postwar alienation, which I’m co-writing with Dostoyevsky.

KUROSAWA: And then Stanley suggested I continued to work on my Shakespeare adaptations, specifically Hamlet set during the Kamakura period.

KUROSAWA: And you, old friend? What are you working on?

HONDA: It’s, um, - SURPRISE! - a monster movie. A giant teapot from the Rings of Saturn attacks Kyoto. Earth's only salvation is that annoying kid Kenny from the Gamera movies and a giant robot bunny. Oh, and the teapot’s got tentacles.

HONDA: Yeah, go ahead and laugh.