WHAT THE MONSTERS TAUGHT ME: King Kong came here to eat bananas and get some tail, and he’s all out of bananas.

One of the most influential creations spawned by Hollywood, the creature that terrorized millions, scorched the box office, and was crafted into the greatest monster of all time is the all-mighty King Kong. And after decades away from our cinematic nightmares, he’s returned with a vengeance and new role that may mean the end of the world as we know it - as a ditch digger. After the evil Dr. Who’s (Eisei Amamoto) robot duplicate of King Kong… 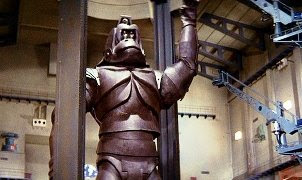 Robo-Kong Power!
…short-circuits while searching for the elusive Element X deep in the icy canyons of the Arctic Circle, Kong is kidnapped from his island and is duped into digging for rare material that could be used to make a devastating bomb. Who's nefarious efforts are closely watched by evil representative Madame Piranha (Mie Hama) and her evil unnamed country *KOFF*-SO OBVIOUS IT’S CHINA-*KOFF* who desperately want their commie hands on Element X. Kong puts up a good fight but is unable to resist the evildoers as Robo-Kong hypnotizes him with pretty colors with some giant-sized ganja for good measure: 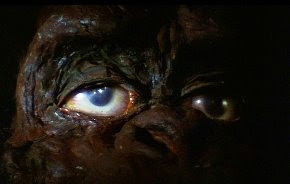 Banana trails. Beautiful banana trails.
Meanwhile, brick-chinned Nelson (Rhodes Reason), his buddy Nomura (Akira Takarada), and cute nurse Susan (Linda Miller) are tooling around in their atomic submarine conducting experiments when they stumble across Kong’s island and unravel Who’s plot. The fey and Tony The Tiger-voiced Who, who by the way may be the greatest Toho villain since scenery-chewing Dr. Malic or the Devo aliens from Monster Zero, will stop at nothing to get Element X, even it it means killing innocent villagers, destroying Tokyo in a fit of rage, or not getting a haircut. 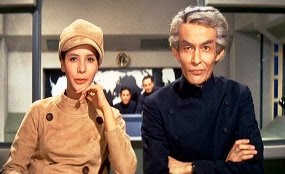 This lord ain’t got time to breed.
But help is on the way. Just before he got shipped to Who’s sweatshop, Kong got the hots for the miniscule Susan who makes Bridget the Midget look like Uma Thurman. Susie's all-American spunk and leggy-ness helps our heroes persuade Kong to defeat Who’s forces, bring down the luchador-esque prowess and egotism of Robo-Kong, and fight for our freedom. But if Kong is going to fight for a word, his word’s poontang.

Although a more detailed history of Kong after the original 1933 King Kong can be viewed here, I will try to sum up the events that led to the making of King Kong Escapes as best I can. Creator Willis O’Brien always wanted to continue Kong’s adventures following the original film and the sequel Son of Kong but studios scoffed at his ideas, in particular his King Kong vs. Frankenstein in which Kong would square-off against the equally legendary monster. Decades passed and O’Brien eventually licensed Kong to Japanese studio Toho who made 1962’s King Kong vs. Godzilla, a rework of O’Brien’s prior story. This Kong/Godzilla meeting is perhaps one of the worst of the Godzilla movies, stilted and exceedingly silly even for a 'Zilla flick. That movie’s success led to King Kong Escapes, where Kong goes it alone against his robot double, a cute chick, and toy tanks. The movie is like the proverbial shaggy dog: laughable, inept, and hard not to love. With colorful fighting sequences on the island, groovy late 60s fashions and horrendous acting, Paul Frees’ distinctive dubbing work, visible zippers, unrelenting sexism, and an unforgettable battle atop the Tokyo Tower, the movie has a nostalgic appeal like a forgotten childhood cartoon restored and rediscovered with wonders still as fresh as the day you first experienced them. And it was Toho’s monster movies in general that marked the better moments of my childhood where I faithfully watched monster and sci-fi fest World Beyond on KPHO every Saturday morning. Good sugary times. King Kong Escapes is an escape of its own, taking me far from the current crop of soulless summer fare, dimwitted robot porn, Nic Cage’s dead eyes and wrinkled forehead as reminders of my own mortality, and a serious lack of contemporary cinematic monkey-on-sexy-lady action.
at 5:00 AM