WHAT THE MONSTERS TAUGHT ME: Giant monkey chain mail bras are soooo 1975.

Obsessive film director Luce Habit (Rula Lenska) searches the streets of London for the next big movie star to feature in her latest jungle epic. After draining the bowery, slums, and flophouses dry, she stumbles across “adorable” Ray Fay (Robin Askwith). 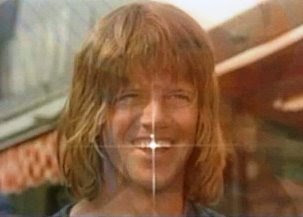 The fate of (wo)mankind rests with this goofy bloke.
Ray is a wisecracking ragamuffin who runs cheapo street scams to feed his movie poster addiction (I can totally relate). After a long foot-chase with accompanying Benny Hill music (seriously), Luce catches up with Ray, convinces him he’s the next Shaun Cassidy and talks him into hitting the high seas to search for the perfect movie location. They hop aboard the subtly-named ship Liberated Lady and after a few irritating dance numbers, ten dozen stupid jokes, and thirty minutes of colorful cross-dressers chanting “Kong” repeatedly, they arrive at the island of Lazanga Where They Do the Conga. After several hours of roaming the rubber jungle, doing pratfalls, and spitting out more stupid jokes, they run into the local natives who greet them dressed in bikinis and Kmart jewelry worshipping a giant female ape named Queen Kong: 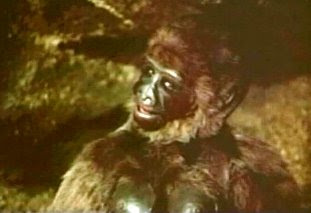 Is that a banana in your pocket or are you just glad to see me, little boy?
So the natives automatically take a shine on Ray and stuff him into a big birthday cake and offer him as a sacrifice to their furry queen. Following a few dozen then-current Jaws, Exorcist, and Airport references and Ray screaming like an impaled doof, Queen Kong uses her huge feminine wilds to woo her minuscule suitor. Ray eventually takes the bait and we are only left to assume that this tiny Englishman banged the banana peels out of Queenie. But the evil Luce has other plans for this huge hirsute harlot. She carpet-bombs Queen Kong with knock-out drugs, straps her to a barge, and ships her to London where’s she’s put on display. 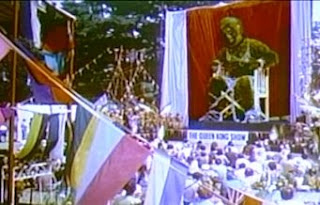 This year’s Ren Fest was even weirder than usual.
Ray, meanwhile, experiences a revelation of sorts (monkey fever?) and transforms Queen’s exploitation into a protest for women’s rights. So gals from all over, from Al Capp’s wife, to a Playboy Bunny, to the human Queen herself (seriously) drop their ironing boards and march in protest while monkey Queen kidnaps Ray, rampages around toy London, and scales Big Ben (um, so to speak). The protest is so successful and awesome and energetic that the military withdraws from their attack on Queen Kong and she is then shipped back to her island where presumably she will now nearly earn the same as her male monkey boss and get six weeks for maternity leave. All’s well on the island of Lazanga Where They Do the Conga and everyone dances with flowers in their hair and float off into space.

And then I handed the bong off to the bad movie watcher next to me.

I’m not sure there’s much else I can say about a movie whose title song features the line, “She’s a genie that pulls my weenie – QUEEN KONG!” (seriously). No, not much at all, I say. Well, I guess I can say that this British comedy really feels like an overly extended Benny Hill sketch, complete with silly music, aching jokes, and plenty of human and non-human cheesecake. It was just missing a fast-motion Fred Scuttle slapping the shit out of that bald old man. But the movie also has an interesting and storied history behind its making, and was almost lost to obscurity. Not sure if that’s a bad thing or not. Just before the release of the 1976 remake of King Kong, producer Dino de Laurentiis sued to block the release of Queen Kong, even though its clearly a spoof (and probably better than his remake) and in no way a remake of the classic monster movie. Therefore, the movie was never fully released in the U.S. and only in the last few years has it surfaced on DVD. Bawdy, lewd, and just plain goofy, the movie is often painful to watch, but not painful enough not to enjoy with its striving production values that you can’t quite pull off without a tongue-firmly-in-cheek. What I particularly enjoyed was the self-conscious attempt at political satire (Queen Kong as the ultimate feminist and women’s right enforcer) which at times made sitting through this wacky, cheeky, and yuk-yuk filled chucklefest bearable. And, sadly, we may never see the next in the series: 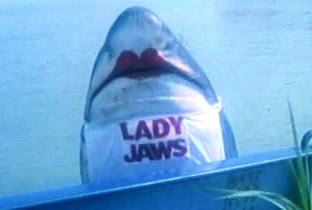