WHAT THE MONSTERS TAUGHT ME: When selecting a human vessel to facilitate your plans to take over Earth, always possess the guy with the beard. He’s the evil one.

Earth launches the space probe Helios 7 towards Jupiter and promptly signs its own death warrant. The probe is taken over by a mysterious space creature that takes control of it and returns to Earth. Photographer Taro (Akira Kubo) is on a plane over the Pacific and witnesses the probe fall into the ocean. When he returns to work, no one believes his outrageous story and he’s laughed out the building. But cutie secretary Ayako (Atsuko Takahashi) believes his story and urges him to join her and boss Dr. Mida (Yoshio Tsuchiya) on a venture to Selgie, a remote Pacific island where Mida hopes to study, scrutinize, and then open a resort. On the boat ride over, slimy anthropologist Obata (Kenji Sahara) bums a ride to the island with our heroes with a nefarious motivation in mind. Instead of golden beaches, cool breezes, and rivers of liquid sex, they discover the wreckage of the Helios 7 off the coast of the island where frightened natives live in terror over recent attacks by giant sea monsters that take people away to a watery dinner. Eventually and without a shred of logic or scientific evidence, Mida concludes that a parasitic space creature commandeered the probe and is taking over the indigenous life of the island. 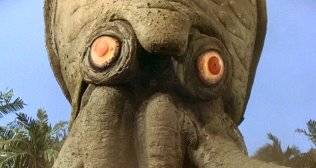 First, it takes the form of a giant squid.

Then, a massive crab. 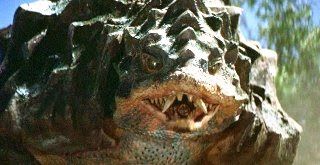 Followed by a huge unfriendly to children turtle. And finally… 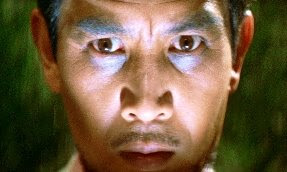 
The space amoeba takes over the evil Obata, grants him incredible strength, and announces plans to take over the world. Taro and Mida organize the locals to fight the creature and with the help of some leftover military weapons from the war, cute native girls hurling gasoline, and the gumption of the wacky Japanese, they set the table for the greatest Admiral’s Feast you’ll ever see in your pathetic life, Skippy.


As I’ve stated here and here, director Ishiro Honda is the heart and soul of Japanese sci-fi and fantasy movies and TV – or tokusatsu for you nerds out there. Throughout the 50s and 60s, he gave rise to the kaiju eiga phenomenon through his crazed plots, mad monster making, and genuine love for the genre, and his influence on pop culture and film is still palpable to this day. By the beginning of the 70s, his career was starting to wane and Space Amoeba, a fun, goofy and action-packed little treat, marked his second to last film. It’s in this era that many of the Japanese monster movies moved from urban settings to the jungle (see Godzilla vs. The Sea Monster, Son of Godzilla, et al), where it’s cheaper to build grass hut models than modern skyscrapers to destroy. And the cost-saving measures don’t stop there. The giant squid is laughably spectacular with painted-on eyes, visible legs, and cartoonish movements. But I have to say that the crab and turtle were actually pretty good with more detail and fluid design in the actors’ movements, especially in the final no-holds-barred battle in the center of the island. Honda was a master of bringing real emotion in his giant monster epics (I dare you not to squirt a few at the end of Rodan – still gets me to this day), and there was an chance to bring in some genuine sentiment with the Obata character in the end, but for some reason that opportunity was squandered. As a result, Space Amoeba, although colorful and pleasurable with tongue firmly in cheek, is a by-the-numbers giant monster movie with some good creature design, unintentionally hysterical dubbing (always an extra delight), and a penultimate farewell to a master of fantasy cinema the likes we’ll never see again.

I heard that J.J. is remaking with Chris Pine as the giant turtle.