Dormant for eons beneath the wretched terrain of wherever this takes place, the evil Princess Dragon Mom (Terry Liu) is awakened with renewed verve to destroy the Earth alongside her La Parka minions and some out of work rubber monsters including Horn Laser Guy, Squirmy King Fire Mouth, Boastful Atomic Crab, Monsturd’s Chinese Cousin, and the Mace-Fisted Slinky Bot Twins. 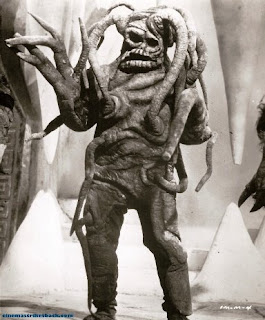 Hey, what about me, Ineffectual Plant Beast?
Meanwhile at Science Headquarters, Professor Chang (Wang Hsieh) answers Mom’s threat by altering the DNA of one of his soldiers, Rayma (a young Danny Lee), and transforming him into the monster-fighting warrior Inframan. He accomplishes this by enhancing Rayma’s body structure with radio parts and cheap video effects – (brilliant!) – and equipping him with lasers in his arms, mini-missiles on his chest, and an out-of-tune song on his lips. Several battles ensue and Inframan totally levels Boastful Atomic Crab, owns Monsturd’s Chinese Cousin, and explodes dozens of La Parka minion stomachs. But Princess Dragon Mom plays dirty and is not above going after the families of her enemies. So when Prof. Chang’s daughter is kidnapped, Inframan unleashes his full fury, power, and wire-fighting balance to take down Dragon Mom, make a monster and minion shitpile, and kill about 40 minutes with non-stop fighting until I go into an epilleptic fit.

Inframan was the Shaw Brothers’, a highly prolific Hong Kong studio of the 70s and 80s, answer to Ultraman and many other tokusatsu action programs of the time. The movie is a bizarre mixture of cosplay kung-fu, outrageous monsters, goofy overacting, and some of the most colorful mishmash of sci-fi action, head-shaking confusion and hysterical cinematic incompetence. Inframan almost looks like it was meant to be TV series that was instead crafted hodgepodge-style into a ninety-minute movie, with hilariously illogical results. Now, the movie is available on DVD in which the original widescreen format is preserved, but I saw this movie on videotape from the Cursed Box of VHS Tapes, which was a horrible full screen pan-and-scan version, only without the scan. The frame is fully centered and never moves, hence there are many scenes were stuff is happening off-screen causing unintentional laughter. Seriously, I may have witnessed 75% of the movie and that may be a good thing because if it has made more sense, it would have not been so fun. Inframan is harmless fun and was part of the movement that spawned the popular behemoth Mighty Morphin' Power Rangers, so love it or hate it, watch with someone with an equal appreciation for the quirky, wacky, and strange.

Pointy kung fu bras not included.
at 5:00 AM

this movie was like a dream. A sweet delirious dream.