WHAT THE MONSTER TAUGHT ME: Don’t sit on the dock of the bay too long else you get serious monstroids.

Based on a true incident as told by a raconteur of mysterious tales, the events that follow supposedly happened in a Colombian village in the early ‘70s. Believe it, for Jericho Freedom Sanchez Burrito Von Funkenberg the Greasy Hobo told me so outside the Wendy’s. An evil corporation run by evil men in evil jumpsuits is pissed off at the recent drop in productivity by the locals they employ to produce evil cement. And the locals are pissed at the corporation for poisoning the nearby lake and breeding a chicken-fingered monster who ate Freddie Prinze Sr. and made a spooky witch out of his spindly girlfriend. So the company calls in a fixer, Travis (James Mitchum), to straighten things out with his 70s mustache and tiny ball-binding shorts. Meanwhile, the local Padre (John Carradine) is trying to calm the scared villagers by reading bible verse in between Wild Turkey shots, but he can’t seem to make them believe that Jesus would ever make such a crappy monster. 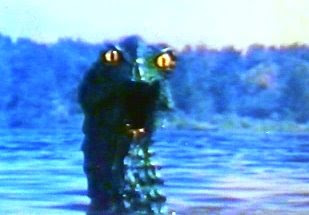 Duuuh...hi folks! Duuuuh!
Also meanwhile, a milquetoast middle manager Peter (Tony Eisley) is banging hotty chopper pilot Juanita while juggling an affair with a secretary who gets munched after he bangs her and then abandons her at the edge of the lake. Yes, this is our hero. And Pete also has a wife who disappears after one scene in which she makes racist comments and generally acts like a See You Next Tuesday. Unfortunately, she does not get eaten, just forgotten by the screenwriter. So once evidence of the monster’s existence is supplied by meddlin’ kids, Travis takes two hours to come up with a brilliant plan: Let’s blow the shit out of it! Yee haw. Copying last year’s Tremendo Thanksgiving, Travis and Peter stuff a goat with dynamite and drag it on the surface of the lake, baiting the creature for a snack blast. Unfortunately for all, the monstroid likes to "do it", and in the end the survivors are faced with the inevitability of Monstroid 2: The Spawnening. Or maybe not.
THE FINISHER:

Monstroid is the movie with a thousand titles, as it is also known as It Came From The Lake, The Toxic Horror, and the high-concept Monster. Well, OK maybe three. It also took nine years to produce. Nine freakin’ years! Hampered by financial problems, stars such as Keenan Wynn and Aldo Ray dropping out, and a complete lack of competence, production started and stopped several times during the 70s. Poorly paced with barely a story to tell, Monstroid feels like Manos The Hands of Fate, looks like a snuff film, and sounds like someone buried the microphones under a blanket of soiled tiny ball-binding shorts (probably Mitchum’s). Despite the apparent pollution angle and tales of a ancient curse, there is no explanation for the appearance of the creature, and for other obvious reasons, we never see the creature above its neck. I’ve seen scarier things at Chucky Cheese. No really, I have! Subplots such as Pete’s love quadrangle, Travis’ romance with a nosy reporter, the torment of a witchy survivor of the creature, and a terrorist stalking the cement plan are dropped inexplicably. The “acting” is pretty much phoned in, or about as phoned in as you can expect from Robert Mitchum’s son James (a vet of shitty movies) and a barely sober John Carradine (a legend of shitty movies). So, am I going to continue to sit here and tell you how bad it is? Will this make me feel better about myself for complaining about a movie called Monstroid? Will it make you feel better about yourself, thankful that you didn’t waste nine years of your life on a complete waste of whatever they shot this on? Yes, yes it will. Because this movie is glorious for all the right (or wrong) reasons – to mock, to rip, and to enjoy with other loser B-movie lovers. And if there is one thing that bad movies does is bring us together, sharing our suffering with laughter and too many buttery snacks. Long live James Mitchum’s package, goofy $.99 Store creatures, and Carradine’s delivery between hiccups.
at 8:08 AM