WHAT THE MONSTERS TAUGHT ME: When your town’s stray dog problem turns residents into murderous rapists, it’s time to dump your suck-ass Humane Society.

Welcome to My Bad Movie, I’m $18 Over Budget, Film School’s Out, Billion Peso Doggies, You and Me and a Papier Mache Werewolf, Horror Fan Lament ’85, and Alice Cooper Needs a Pooper Scooper.

Vincent Raven (Alice Cooper) is a rock star who is being pressured by his producers to do something different in his “electronic videos”. This is due to the fact that his latest video “Identity Crisis” (or “Chrises” as the credits indicate) is basically just him dressing up like James Bond, Jack the Ripper, Billy the Kid, and Sherlock Holmes and mugging to the camera. 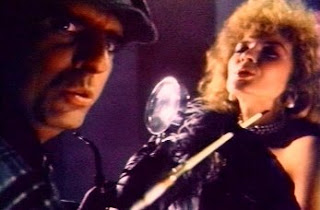 I have no clue why he did this movie. Heh.
So the gazillionaire singer does what any pop star does and throws money at the problem and loading a van up with three chicks and two dudes and heads back to his spooky hometown to search for inspiration. But back in said spooky hometown, Vincent and his long-dead clan are persona non grata. His father was rumored to be a werewolf who could control the children of the night into ripping up the townsfolk to death, devouring innocent children, and pooping in front yards. After the obligatory Fat Sheriff (Ricardo Palacios) warns him that someone let the dogs out (woof, woof, woof,…um, sorry), Vincent presses on despite the objection of girlfriend Sandra (Victoria Vera) and girly psychic Angela (Pepita James) who is seeing visions of zombie-like creatures attacking the group. He dismisses their concerns but when they arrive at his boyhood home, they find the caretaker missing, blood splattered on the walls, the sandwiches made with Miracle Whip and not mayo. Yuck! Eventually, he admits to the group that he may have a teeny-weeny werewolf curse and there’s just an itsy-bitsy chance that he will shred their innards before morning. Nonetheless, the intrepid crew shoots the creepy music video, a dark ditty called “See Me in the Mirror” that’s not too bad. It had the dogs howling. The non-goth fan locals break up the shoot and invade Vince’s home with vengeance on their mind and a few silver bullets for Vince’s pale heiny. So as Vince struggles with his canine curse, a bigger and badder beast is stalking the land, threatening his friends' lives and defiantly guffawing the leash law.

Monster Dog was directed by Italian B-movie crapper Claudio Fragasso, who is probably better known for having made the legendary and allegedly awful Troll 2. I say allegedly because I haven't seen it - yet. But there is nothing alleged in the awfulness of Monster Dog, for it is all there for the world to see in its poopy glory. The only thing that can be defined as legendary in this movie is the presence of the rock Prince of Darkness Alice Cooper, who for some reason took the role to take a few days off in wherever dreary grey place they shot this turkey. Well, come to think of it, dreary and grey may be an ideal Cooper vacation. This movie is patently appalling, does nothing with the very thin werewolf plotline (a low budget is no excuse – they literally do NOTHING), and treats us to terrible effects that would make Rick Baker vomit in rage. 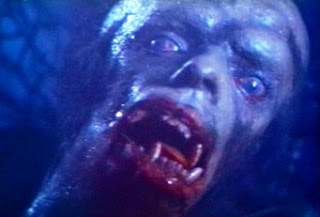 For some reason, Cooper’s voice is dubbed and it sounds like that cheesy action-adventure voice heard in Italian action movies of the 70s and 80s. Actually, on second thought, this was a highlight for I could not stop chuckling every time Cooper spoke. Anyway, the movie is pretty bad and dull, but I should mention though in my monster movie research (stop laughing) I understood that Vincent Price was also in this thing, but he wasn’t. What the Hell? Oh, before I forget, another highlight are two cool Cooper songs that I guess he wrote just for this movie, but I assume only hardcore Cooper fans would appreciate them (I’m not a big fan but I still liked them). Other than that, Monster Dog offers nothing beyond a completely mock-able but boring eighty minutes and time better spent for Cooper fans would be to see his much better performance in Wrestlemania III where he escorted Jake “The Snake” Roberts, who is more of a Monster Mess.
at 5:00 AM