WHAT THE MONSTERS TAUGHT ME: You can’t woo with poo-flinging.

A simian Psycho; Adventures in Monkey-sitting; kneel before Terrence Stamp's phone bill; the originator of the hairy fist bump; the worst link since Icravehandlebarmustaches.com; Mr. Smith goes to Crystal Lake; the wild gone wild; microwavable telephones; the curious absence of Philo Beddoe, Harvey Keitel, and Dr. Zaius; and Conquest of the Cottage of the Apes.

Jane Chase (Elizabeth Shue) is an American student studying zoology in the U.K. and she’s fascinated with Dr. Phillip (Terrence Stamp) and his work communicating with chimps, apes, and orangutans. She becomes doubly-fascinated when she takes a job cooking breakfast and shoveling monkey poop for the Doc at his costal cottage. Here, he conducts ground-breaking experiments with three precocious monkeys including: 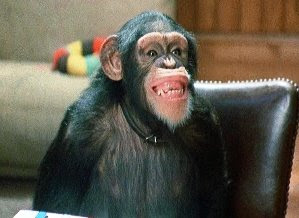 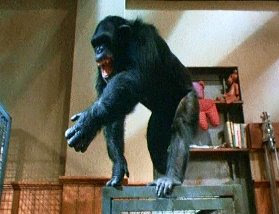 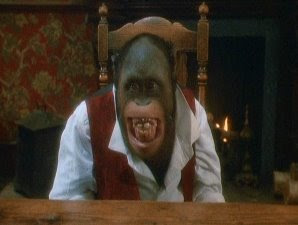 And the deeply troubled orangutan servant hence-the-title Link.
Phillip obsesses with developing the ability to communicate with his monkey friends but realizes that working too closely with them may be more dangerous than it sounds. Especially since Link, a refugee from the circus who’s been completely domesticated and performs butler tasks around the house, is apparently sneaking out at night and killing birds, dogs, and what not. He decides it’s time to put ol’ Link down, a decision that doesn’t sit well with the sympathetic Jane. But Jane slowly realizes that Link may be sniffing too much of his own poop when she catches him peeping at her in the shower, overturning trucks, and laughing at inappropriate jokes at the dinner table. But it appears that Jane’s boobies took Link over the edge and suddenly Phillip disappears, Imp panics, and Voodoo is found dead in a closet. And despite these eerie occurrences, Jane stubbornly sticks around the creepy cottage, reads Imp stories, and hears Link creeping around the property outside. 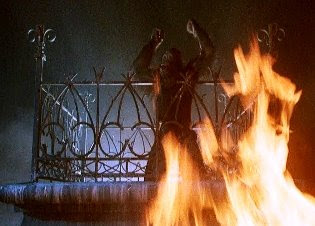 TOP OF THE WORLD, MA-NKEY!
So what was at first a dull remake of Going Ape, suddenly turns into Night of the Bloody Apes as Link emerges as a monkey Michael Myers and turns a lovely weekend in the countryside into a hellish nightmare in which Dunston won't be the only one checking out.

Link, one of the most peculiar movies I’ve ever seen, was one of three very strange and quite bad monkey movies, along with King Kong Lives and Monkey Shines, I remember avoiding back in the late 80s. I never really liked movies about regular-sized killer monkeys. To me, they are very depressing and I almost always root for the homicidal apes whose human-killing sprees almost always prove fruitless. It’s kind of like rooting for the slow kid to win the county Spelling Bee – you wish he could do it, but despite all your training and bull-whipping, there ain’t no way it’s happening. And it’s probably a good decision that I didn’t watch this thing way back when, for I would not have enjoyed it as much in my usual ironic sense. The movie has a lot of old fashioned horror movie value – the demented scientist, the unstoppable creature, the spooky house in the middle of nowhere, the damsel in distress, and even the obligatory Hammer Films house burning at the end. But what it really lacks is any sense of impending doom or terror. These are cute monkeys for crying out loud! Link is like a killer Clyde, mugs for the camera, wears a charming butler outfit, and cracks me up every time he’s on screen with his kooky antics and decidedly non-scary behavior. Not a good recipe for a new horror icon. Shue and Stamp sleepwalk through the picture although they did seem to handle their animal costars with apparent ease. Unfortunately, Link, with its slow pace, terrible dialogue, really bad Jerry Goldsmith-doing-Danny Elfman score, and lack of frights can’t be recommended as a scary monkey movie, but can be recommended as another 80s oddity, a movie that can’t decide whether it wants to be a wacky send-up or a terrifying trip into the mind of a tortured ancestor of humanity, one banana short of a bunch.
at 8:38 AM