WHAT THE MONSTERS TAUGHT ME: Modern cinema has lost the thespian tradition of emoting through cheap skull caps. 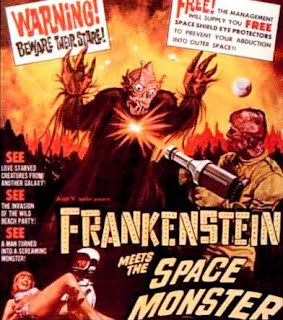 Radiation, pollution, and the fact that all their men look like Bat Boy have turned all the women on Mars sterile. So in order to save their dying race, a Martian spaceship travels to Earth to pick up some rumored easy girls. Um yeah, good luck, pals. Leading the expedition are the icy Princess Marcuzan (Marylin Hanold) and the eerie Nosferatu-ish Dr. Nadir (Lou Cutell) who are clearly superior to humans as they have mastered the art of glancing and nodding in approval. Meanwhile, NASA is preparing its own trip to Mars to search for signs of intelligent life and not to get some hot tail. They hold a press conference which attracts all the world’s reporters (all four of them) and present astronaut Frank Saunders (Robert Reilly) who will make the journey solo. Unbeknownst to the world is the fact that Frank is actually a half human/half robot cyborg designed to survive the harsh conditions of space and Mars. He accidently malfunctions during the press conference (by freeze-framing) and is whisked away by his creator Dr. Steele (James Karen), his assistant Karen (Nancy Marshall), and tubby General Bowers (David Kerman). After a quick rebooting, Frank is launched into space, but things go horribly wrong. The Martians shoot Frank’s rocket down near Puerto Rico where the horny aliens have already started their hotty harvesting. Ok, things kind of get sketchy from here on out. Steel and Karen travel to P.R. and toodle around in a scooter getting comfy presumably searching for the severely facially burnt Frank who’s wandering the countryside in search of Noxzema.

The epic confrontation you've been waiting for?
On board the Martian ship, Marcuzan’s minions drape the kidnapped girls in frilly lace and send them down a conveyer belt for some arcane reason. Dr. Nadir glances and nods in approval. Frank is going nuts in the wilderness and starts offing Puerto Ricans like Saturday night in the Bronx. So eventually, Steele finds Frank and fixes him, but now Karen has been kidnapped by the aliens and jailed in their Pith-helmet saucer. Frank is sent on a suicide mission to save her and the other bikini babes and it is here where the arena is set for the cinematic icon confrontation since King Kong bounced Godzilla: Half-Charred Astro-Bot meets Randy Melty-Zombie in Ape Costume! Hence the title…

If there was something lower than Grade-Z, Frankenstein Meets the Spacemonster would have to strive to reach it. But that fact, like most of the films I’ve watched on this blog, doesn’t mean it wasn’t fun. Well, fun if you like movie filled with mostly stock footage, bizarre non-verbal exchanges between characters, 60 Mod-rock scooter riding montages, and the vibrant storytelling of one of those comic books that Jehovah’s Witnesses like to hand out. In terms of badness and ineptitude, the movie is constantly mentioned in the same breath as Plan Nine from Outer Space, and its skimpy budget, meager production values, and weird atmosphere are reminiscent of MST3K gems like The Creeping Terror and Monster A-Go-Go. The creature design and makeup are pretty poor, and the Spacemonster himself appears to be a mixture of whatever they could find in the bargain bin at the costume shop, although it doesn’t matter because it’s only in the picture for less than ten minutes. The acting is stilted, creepy, and beyond unnatural, approaching avant-garde (hell, that’s pretty bad). But there seems to be something more than just a drive-in aesthetic going in this movie, something rivetingly absurd and perhaps charming. After watching it, I had a feeling like when child gives you a crayon drawing of a squiggly dragon racing over a disfigured moon with the words “2 Unca Tremedo” scratched beneath it. Or as if like my nine-year-old ADD nephew made a full-length feature with a Fisher Price Pixelvision camera, a few street people, and a discarded colander for a spaceship. Or as if Michael Bay made a movie worth a damn. You can’t help but feel proud for the effort given the extraordinary triumph over shortcomings. Keep in mind that Frankenstein Meets the Spacemonster is bloody awful, but it is also a spectacle of tacky magic, an unsettling vision of incompetence, and a bizarre experience from an era of gloriously bad cinema that the SyFy Network and Asylum has apparently inherited. But I for one will weep for the passing of the classic creature feature knowing full well that as long as I keep doing this dumb blog, nothing bad will ever die.
at 8:58 AM

El T- it's been a GREAT month of monster movies! Love the blog.