WHAT THE MONSTERS TAUGHT ME: Confirmed - Lorenzo Lamas is both the savior and antichrist of bad cinema. 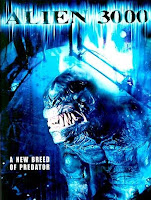 God’s vengeance upon a Peeper; Agent Zabadoo Zap; a Pic ‘N Save Predator; the Legend of Curly’s Alien-possessed Gold; jerk Mercs; Marlee Matlin and Juliette Lewis’ love child; the world’s yummiest pencil; hot monster on chopper action; a script co-written by Sweet Mistress Cocaine; and the only thing worth watching about this thing – a Flick cameo!

Some stupid teens hiking around a mysterious cave are slaughtered by a mysterious shadow creature that isn’t Dennis Rodman when they stumble across golden treasure. We then cut to a mental hospital where Kate (Megan Molloy) is dreaming these occurrences, which may or may not be happening. This attracts the attention of the Office of Paranormal Investigations, a government agency headed by Sheila (Priscilla Barnes), enforced by military guy Biggs (Lorenzo Lamas), and comprised of about $40 worth of office furniture. Sheila dispatches agents Burke (Shilo May) and Lyle (David Kalamus) to investigate Kate’s dreams and discover that something may be actually be happening in that spooky cave. So they bust Kate out of the wacko house to join a rag-tag team of mercenaries to confront the horror. The team is comprised of psycho Burke (Matt Emery), natural born killers Straker (John Fava) and the hot, crazy, and oversexed Phoebe (Phoebe Dollar) under the command of goody two-shoes Sgt. McCool (um, yeah). McCool (Christopher Irwin) falls for nutty Kate, Burke and Lyle bicker over protocols, and Phoebe and Burke discover the gold and the invisible monster that protects it. Meanwhile, another alien monster awakens in OPI headquarters, possesses Sheila, and almost kills Biggs just before the toy building blows up. Biggs takes a chopper out to the woods to save the crew and utters nonsense like “Where there’s weapons, there’ll be water.” So the greedy inviso-monster starts eliminating cast members, the director starts pointing and shooting at things at random, and somehow this thing was completed resulting in my inevitable helicopter ride to the nuthouse where Lamas will mock me holding a bloody monster head and dangling a copy of Alien 4000 over my screaming head.

With few exceptions (MST3K), nothing subtitled “3000” is worth a damn*. Cases in point include Dracula 3000 (putrid), Mr. 3000 (poor Bernie Mac), and the quite poopy early 90s post-apocalyptic headache Warlords 3000. So it should come as no surprise that Alien 3000 is an agonizing cheapo sci-fi torture session. Where to begin to describe the execrable badness of this turkey? Well firstly, you could train a film school of ten dozen dopey directors with the textbook ineptitude and low budget awfulness that is Alien 3000, and the movie often appears to be proud of this fact. Second, the acting is appalling. “Stars” Lamas is his usual ungodly self pulling prickitude to a full hilt and Barnes can barely stand up and looks embarrassed (really?) when she has to do the scary alien voice when the creature possesses her. The rest of the cast is forgettable, with the exception of the sexy and wild Dollar who injects a lightning rod of irritating, screechy, evil energy in her small role. I very much enjoyed seeing her die and in the unlikely event she is reading this, I hope she takes that as a compliment. Third, the non-rubber monster effects are kinda bloody, and while there’s a fair amount of gore, but it’s mostly silly and slapped-together, much like the story itself which often feels like several movies were partly made and then sewn together like a post alien autopsy. And lastly the sub-cheapo values of the film adversely affect its premise and there are stupid holes like: Why would the government hire mercenaries to do a simple field investigation? Why would aliens be interested in golden swords leftover from the Renaissance Festival? And why is Lorenzo Lamas allowed to pilot a toy helicopter? Careless dreamweaving. Alien 3000, probably the only movie where the title reflects its budget, is also known as Unseen Evil. Well, Christ, let’s hope so.