THE MONSTER THAT CHALLENGED THE WORLD (1957)

WHAT THE MONSTER TAUGHT ME: Never use an earthquake as an alarm clock.

Yet again, the U.S. Navy is sticking its nose into where it’s not wanted. This time it’s nowhere near the Persian Gulf or Putin’s swimming pool, but rather a prehistoric underwater nest deep in the Salton Sea in Southern California. And it’s precisely this Naval snooping that results in the disappearance of a sailor during a routine patrol. The new stern base Commander Twillinger (Tim Holt) demands an immediate investigation, suspecting the sailor’s gone AWOL. Meanwhile, scientist Dr. Rogers (Hans Conried) is detecting odd activity in the sea following a moderate earthquake and suspects that the seismic activity may be linked to the missing sailor. But it isn’t until a local teen trollop and another sailor disappear that the Commander is convinced that Rogers may be on to something. A diving team finds the lovers’ remains near a fissure in the deepest part of the sea where a giant mollusk has awakened with a taste for these new fangled humans. The team manages to blind the creature but steal its young still in egg form for further study. But Monster Movie Rule #999 states quite clearly: never mess with a humongous ancient Lovecraftian snail’s kids! And not even a boiling pot, a million yards of Saran wrap, and a thousand ticked-off seamen will be able to stop the vengeance of a gassy mollusk from one million B.C.!

The Monster That Challenged the World was mostly filmed in the Salton Sea, one of the bleakest, most barren, and most fascinating geographical oddities in the U.S. Basically a huge salt lake in the middle of the desert in Southern California, it started as small lake and grew after runoff from the nearby Colorado River swelled its volume to sea-like proportions in the early 20th century. I have been there, and trust me, it is a truly creepy place. No more a haven for tourists, the place reeks of the dead, with blanched trees sticking out of swampy waters, ruins of most likely haunted resorts, and the ambiance of a post-apocalyptic water park - perfect for an old fashioned monster movie. Read more about the Salton Sea here, but for additional Salton Sea information do not watch this. But during the filming of The Monster That Challenged the World, the Salton Sea was fairly hopping with tourists, fishing, and research, so unfortunately the eerie desolation of the area today was not available for the makers to exploit. Regardless, most of the movie is fairly standard 50s sci-fi schlock, competently if unremarkably accomplished with probably too many diving sequences than I usually care for. The performances are fine, although the underrated Conried is particularly great as the inquisitive Rogers, atomic scientist and mollusk expert. But the real stand-out in the film is the monster itself. 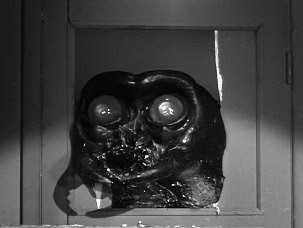 Heeeeeerrrreeee'ssss Mollusky!
This creature is a large-scale puppet with basic animatronics. SFX folks out there reading this could probably articulate it better than I can, but that is the basic description. But the thing is pretty darned sophisticated and scary and I was blown away by the level of detail and horrific design. Although you have to wait about seventy minutes for its battle in the finale, it is well worth the wait as the creature hatches and seeks out the Commander's new squeeze and her petulant daughter. The Monster That Challenged the World is a capable sci-fi/horror offering, perfect for a rainy afternoon or day at the nuked beaches of the spooky Salton Sea. But the title is certainly misleading. It was more like the Monster that challenged El Centro, or the Monster that challenged Calexico.