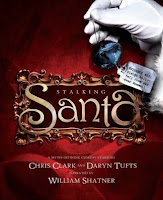 
Lloyd Darrow (Chris Clark) is the world’s premier “Santologist" or Santa Claus Expert whose glorious, lifelong and mostly futile attempt to prove the existence of Old Saint Nick is the focus of this incisive documentary.  The breadth of Darrow’s research has included first-hand accounts of Santa sightings from impish kids and questionably sober adults, alleged recordings of Santa sending X-mas wishes during séances, the interrogation of so-called Mall Santas who may be agents of a secret cabal to conceal the truth, and of course, a plethora of Santa-related archeological evidence:

Also featured are his long-suffering but supportive wife Barbara (Lisa Clark), his sweet daughter, his increasingly disillusioned son, and enthusiastic research assistant Clarence (Daryn Tufts) who stands by Darrow's questionable certainty despite the odds.  The detail of their investigation in the days leading up to X-mas reveals the full scope of the Santa Conspiracy which provides explanations for  everything from crop circles (alternate landing fields for Santa’s sleight), to UFO sightings (Santa’s sleigh ride tests), to  the so-called “alien” body recovery at Roswell, NM in 1947:
The passion that drives Darrow and his protégé Clarence is finding out the identity of who or what is suppressing public knowledge of Santa's existence, and they come up with some pretty reasonable answers.  For example, if Santa – the universal gift giver – existed, parents would be able to save their money at the end of the year, or perhaps invest in a certain masked movie blogger’s Hamdinger franchise.  Santa’s free goody giveaway would result in economic ruin as well as a shitload of leftover candy canes.  While the rest of the world mocks him, Darrow perseveres and his belief is bolstered by the appearance of mysterious characters that enter his life with secret information and stories about governmental interference in the truth about Santa Claus.  In the end, we are presented with a livid portrait of a man obsessed with unraveling that which cannot – and perhaps should not – be unraveled, and the truth may reveal a stocking filled with glittering lies, a Pandora’s box of tinseled chaos, a time bomb of elfin deceit.  Insert gratuitous fruitcake joke here.
THE FINISHER:

I might be talking out the business end of my hinder but when it’s all said and done, the 2000s will be known for one thing and one thing only: the post-Spinal Tap reemergence of the mockumentary.  Stalking Santa is a great idea for a fake documentary and its X-mas chuckles, creative enthusiasm, spirited performances, and awesome William Shatner narration make for light fare and fun times.    Filmed perhaps to perfection in the style of any History Channel UFO documentary with hints of The Office, the movie hits its comedic notes consistently and the production values in terms of the Santa “evidence”, eyewitness accounts, and interviews are smart and well-done.  Interspersed between the wackiness are interviews with real kids sharing their feelings about Santa.  For the most part, these sequences are cute but not very memorable.  Well except for this one little girl.
The movie for the most part avoids most of the pitfalls of lesser mockumentaries that could have sunk its subtle humor and deadpan delivery and provides some good laughs without getting too wacky or off-topic.  If Santa does indeed exist, and duh he does, maybe he’ll put this fun little movie in your movie stocking.  That is, if you haven’t been a complete asshole this year.
at 5:00 AM