SCIENTIFIC FACT LEARNED: In order to solve the riddle of Atlantis, we must sink more Russian submarines!

Miami, 1994 (the future). Mike (Chris Connelly) and Wash (Tony King) are guns-for-hire who kidnap old guys for money. After completing a job, they travel to Trinidad on a boat to spend their well-earned pay, but a strange storm veers them off-course. Meanwhile, strange goings-on at a off-shore oil drilling platform hamper the efforts of a scientific team trying to raise a sunken Russian submarine from the depths of the briny deep. The team has recruited hotty archaeologist Dr. Cathy Rollins (Gioia Scola) to decipher the markings of a strange artifact found near the sub. In about ten minutes, Rollins determines that the artifact is a relic of fabled lost continent Atlantis and may lead to evidence of its continued existence on the ocean floor. When the submarine is raised, it unleashes a wave of radiation that enables a peculiar giant object with it that nearly destroys the platform. Mike and Wash are able to rescue the survivors including Rollins, a chopper pilot, and some other guy. They make their way to an island nearby and find that the residents have been tortured and killed, homes and business have been burned to the ground, and all the local Hot Topics, S&M outlets, and Sephoras have been looted by these guys: 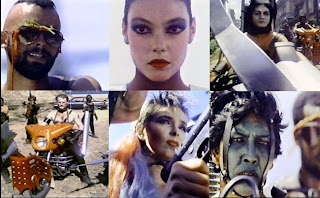 Who are led by this guy: 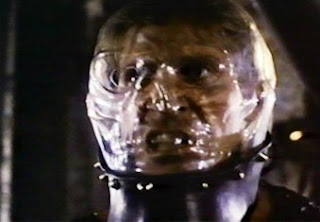 Fishbowl Head (Ivan Rassimov)
The mysterious, armed, and stylish warriors are known as the Interceptors, resurrected inhabitants of Atlantis come back to reclaim their world. They pursue the survivors and corner them in a burned-out building where Mike and Wash knock them off one by one with napalm and peashooters. Unfortunately, Fishbowl Head kidnaps Dr. Rollins, killing most of the survivors in the process. About twenty to thirty minutes of non-stop action soon follows including shoot-outs, wild chases, and some impressive stuntwork. 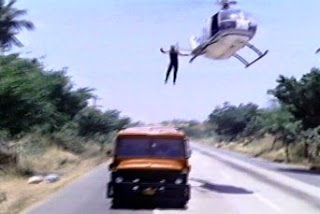 Mike and the gang find a helicopter and pursue Fishbowl to the original site of the platform. There, they find the island of Atlantis resurfaced, along with the Russian sub whose nuclear warheads have been armed. Now, here’s where the angle gets complicated. I’m not sure how or why this happens, but Rollins has been brainwashed to follow Fishbowl’s command and attempts to resurrect the dead spirits of Atlantis and prepare the world for their return. Not sure how much mystical training she got in archaeology school, but sure. Let’s go with that. So not only do our heroes have to deal with bloodthirsty punks, nuclear missiles, and sunburn, they have to face down the dreadful fishbowl-clad villain and not giggle to death in the process.

Raiders of Atlantis (aka Atlantis Inferno) was directed by Ruggero Deodato who made the infamous also jungle-set Cannibal Holocaust, a beloved hallmark of Italian horror. Less serious than the gruesome Holocaust, Raiders is similarly gruesome and violent, but it’s also an insane action-packed ride with all the narrative comprehension of a mental house talent show. The movie sets its ambition extraordinarily high, trying to absorb all the elements of popular films of the time including Raiders of the Lost Ark, Road Warrior, and sure, why not throw in First Blood in there too. Most of the time it succeeds because the action is well-executed with crazy stunts, decent gore, and wonderful decapitations. Atlantis isn’t the only mystery in the film; we also have to struggle with figuring out where characters are going in such a hurry, why are plot points dropped, and why is no one able to explain anything. We are also left with many unanswers questions. Why does 1994 look just like 1983? Who exactly are the leather-clad Interceptors? How did they learn to drive three-wheeled motorcycles and helicopters? Why do they die so easily? What the hell was that ending all about? Where can I get a machine gun that never runs out of bullets? Why does that guy wear a fishbowl on his head? Fortunately the pace is quick because you’ll get into trouble if you start to think about what the hell is going on. Like most Italian exploitation films of the 70s and 80s, Raiders of Atlantis is a delirious concoction of deadly action, goofy mystical hookum, and a delightful assault on all your senses. 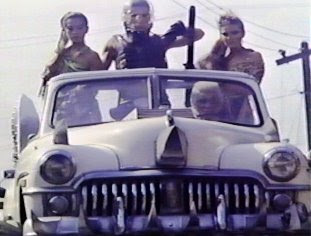 And this is science fiction ... how?