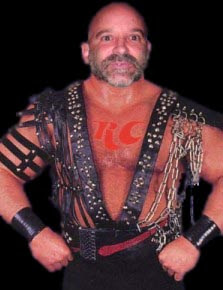 Today on a very special edition of Planet Tremendo, longtime friend to Tremendo Time Film Geek Schu joins us with a review of the Italian sci-fi classic The Humanoid. Schu is a screenwriter, actor, Godzilla expert, sports commentator, progressive rock follower, Miami Vice watcher, pro wrestling fan, movie geek and all-around pain-in-the-neck. Yet despite his quirky attributes and haughty demands on Hollywood output (like, be good), he remains an enthusiastic fan of awful, awful movies. Sounds like a natural around here. Amongst the stars that make up his constellation of crap are Lorenzo Lamas, David Heavener, Sybil Danning and the immortal Steven Seagal. If you're in the Tucson area (why would you be?), you can catch Schu's voice on the airwaves here, read his words here, or catch him at any bus stop swigging on this. 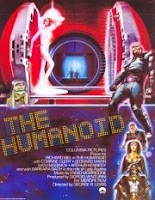 An evil empire that wants to turn mere mortals into controlled, indestructible fighting machines. They are going to use the city/planet/neighborhood /village/desert (I really couldn’t tell exactly what this place was) of Metropolis as the guinea pig for a test run. Well, after they test it on Richard Kiel first. Kiel is best known as the Jaws character in a couple of the Roger Moore James Bond movies. Here he plays a happy-go-lucky space pilot. We know he’s a space pilot not so much because he flies a Millennium-Falcon-esque ship in space, but because he wears Amelia Earhart's aviator cap. Up until that point I really wasn’t sure, but seeing the aviator cap pretty much sealed the deal.

The experiment works, and Kiel (Golob) goes on a one-man destruction spree. It’s up to a rag-tag band of rebels to save the day. The rag-tags include a generic Han Solo type, a 10-year-old Asian dharma prodigy named Tom Tom (I prefer taking directions from Tom Tom. It’s a way better navigation system than Garmin), a mechanical dog with an excitable antenna tail and a beautiful princess who has to try to avoid capture.

So there’s this science fiction film that opens with a scrolling explanation sequence, features a beautiful princess who might hold the key to humanity’s salvation, a power-hungry villain with his sights set on galactic domination, a boy with untapped magical powers and a mechanized sidekick that’s as loyal as man’s best friend. 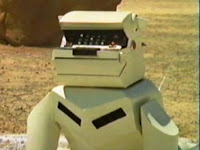 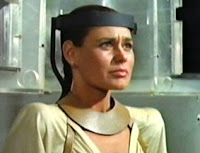 …Barbara Gibson.
Really? Barbara Gibson. I found 24 Barbara Gibsons in the local phone book (yes, they still make those). Could all of them be Metropolis royalty? I must say, she did a royally hypnotic ass wiggle in that flowing tan princess gown.

Fear not, there’s more. If Star Wars can get Alec Guinness, then by gum Humanoid can reel in Academy Award winner Arthur Kennedy as the doctor who created the Humanoid experiment. He also has very shaky hands, and it’s his responsibility to keep Lady Agatha alive. Lady Agatha is played by Barbara Bach, who may sport the greatest helmet hair in the history of cinema (and by helmet hair I mean hair that looks like a Stormtrooper’s helmet) and a penchant for the Elizabeth Bathory school of blood-draining beauty techniques. 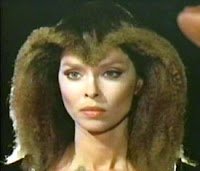 Every Italian Star Wars rip-off of merit must have a worthy Darth Vader parallel, and in Humanoid that character has a really cool helmet and stands about 5-feet-six inches. Imposing indeed. This is way before Rick Moranis did the same bit in Spaceballs. Damn SCTV Canadians. Ripping off the Italians. How dare they. 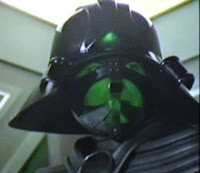 Also, in the Humanoid world, whether you’re part of the good guys or bad guys, it is important to flail your arms in the air and fall forward prior to dying. It goes something like this. Get shot. Flail arms. Die. This must be a very important tradition. 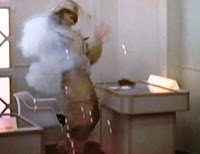 Did I mention the Ennio Morricone soundtrack? In an interview posted at golobthehumanoid.com (how can you not love the Internet?), Morricone talks about how he wanted to catch a feeling of space missed by Star Wars composer John Williams. Well, he got the spacey part right.

I remember Barbara Bach. She was the lead in "The Schu who Loved Me...and Then Loved Me Again."

Schu looks massively studly in his pic up there. Is he preparing for a post-apoc of his own?