SCIENTIFIC FACT LEARNED: Missiles can only be stopped by death. 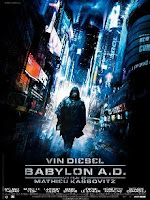 Throw-Up (Vin Diesel) is a mercenary living in the lawless frontier of New Serbia in the future. He’s been exiled from America and now ekes out a living watching YouTube, beating up arms dealers and eating rabbits. One day, Throw-Up is kidnapped and taken to the luxurious tank armored by flatscreen TVs of mobster Gorsky, a molten, slobbering, misshapen creature that kinda looks like Gerard Depardieu. Oh, it IS Depardieu? Jeeesus. Throw-Up is assigned a job to smuggle a young girl Aurora (Melanie Thierry) and ass-kicking nun Sister Rebecka (Michelle Yeoh) out of the country. They must travel to New York, into an America which has been taken over by a corporatized religious order called the Noelite Church. Aurora seeks medical help in the U.S. as she is plagued by visions of the future, harsh seizures at the sight of violence, and terrible fits of overacting. They try to make their way across the Bering Strait via submarine, snowmobile, and Diesel’s furled brow while being pursued by acrobatic thugs who hop around like Super Monkey Robot Team Hyper Force Go from B13. The goons are employed by Aurora’s real father, a geneticist (Joel Kirby) who created her for the sole purpose of reproducing a miraculous super-powered messiah figure for the Neolites. But he had a change of heart and kept her hidden from the church’s leader, the nasty third-grade-teacher-esque High Priestess (Charlotte Rampling) who wants her at any cost. Throw-Up is a ruthless bastard, having lived a life of senseless violence and murder for money, so he has no stake other than money for completing the job. But after witnessing the girl’s powers and finding a shred of hope for the future, Throw-Up’s heart softens for the cause and pants harden for Aurora and he actually puts in an effort to protect them. An Apocalyptic showdown awaits them in New York as the forces of corporate evil, God-fearing good, and Diesel’s tin-shattering vocal cords will collide.

When I first saw trailers for Babylon A.D. a few months ago, I thought, “Oh, crap, another Vin Diesel sci-fi travesty”. I think critics and audiences were thinking the same thing as Mathieu Kassovitz's film was trashed and ignored at the box-office. So I thought it might have to wait until DVD when I can better choke it down with a six-pack, a sack of peanut M&Ms, and less bitterness. Well, it turns out I didn’t need all those delicious distractions from kinda liking this movie. And I’m not sure why I did, but I know that I shouldn’t have and I’ll explain why. But first, some background.

Director Kassovitz won the Director prize at Cannes for his La Haine (1995), a powerful drama about violence and racism in the cultureless wastelands of the Paris suburbs. For a while, he was the darling of the foreign film set. But in 2003, he released his first Hollywood outing, the awful, unintentionally hilarious Halle Berry vehicle Gothika, a lifeless supernatural thriller that totally tanked. Since then, Kassovitz has been overlooked as some sort of artistic sell-out. But how can you sell-out if all you make are bombs? Anyway, he worked hard for years to get Babylon A.D., based on the novel by Maurice Georges Dantec, to the big screen. The book brims with violent visions of a dystopian landscape, nations ruled by theocracies, and technology enabled to restore faith in religion, all told from various points of view of multiple characters. Kassovitz claims that his original vision was sabotaged and trimmed by the studios who wanted a less cerebral, and more action-packed offering.

The result? A watchable sci-fi action flick not nearly as damningly dreadful as the trailers and critics would have you think. While it’s certainly not going to garner any Saturn awards or acclaim from the brainiest of the science fiction crowd, the movie has some cool visuals, well-executed special effects, and a swift pace that doesn’t slow down enough to force you to think about the gaping plot holes and silly script. The action scenes, however, are hobbled by trying to achieve a false sense of excitement through the use of Goddamned shaky cameras, break-neck editing, and CGI explosions. Also a determent is the under use of the awesome Yeoh, who isn’t given much to do other than function as exposition for Aurora's exploit. Any metaphysical themes Kassovitz wanted to include are buried beneath the veneer of a standard sci-fi actioner offering nothing particularly groundbreaking, but certainly a modest entertainment. Maybe the best thing to come out of this movie is the hope that Kassovitz will take a hike from Hollywood, return to his independent filmmaking roots, and make Throw-Up a distant memory.

His is name is what? Toorop?