SCIENTIFIC FACT LEARNED: There is life after Star Wars. An afterlife.

Luke Badmoviestarrer, Cheech Ghandi, Jeeves-Bot, the little putt-putt plane that could, a World-Ending Wind that isn’t Rush Limbaugh, Sorry-eri, Hagrid the Pimp, and Game Over, Man!

After an unknown apocalyptic event, the Earth has been blow-dried to a crispy brown by a cruel wind known as the Slipstream (hence the title). In these desert wastelands, prop-plane pilot/cop Trasker (Mark Hamill) and his partner Belitski (Kitty Aldridge) hunt down a murder suspect (Bob Peck) down a rocky canyon. After capturing their prey, they take in a nice lunch of cat gut salad down at the local post-apoc diner where they meet fast-talking crook Matt (Bill Paxton). Matt learns of the high bounty for the man and tricks Trasker into handing him over. Matt and the poetry-spouting man take off in his plane with Trasker and Belitski hot on their trail. When Matt tries to unravel the man’s backstory, the man, who Matt names Byron, admits guilt, seems unremorseful and detached, and has creepy eyes.

The fugitives make their way to Matt’s pad, a cave where rotten pimp Montclaire (Robbie Coltrane) tries to muscle his way in to Matt’s newfound profit opportunity. But Matt and Byron make their escape and come across a tribe of native people called the Wind Cult led by wild-haired Avatar (Ben Kingsley). Byron then begins to display amazing healing powers and cures the sick and blind members of the tribe. Despite the miracles, he is branded as evil and is sent away on a giant kite. Trasker and Belitski catch up with them, but Trasker is seemingly killed while trying to bring down Byron, who is revealed as a renegade robot who killed his master. A robot with Jesus powers. OK, the future’s not looking so bad after all. Belitski befriends Matt and Byron and the three make their way to a museum transformed into an oasis where the exceedingly rich, including a fatuous Cornelius (F. Murray Abraham), live in luxury while the rest of the world sucks sand. Both Byron and Matt find love/one-night-stands, and the post-coital robo-butler Byron contemplate his newfound humanity and compassion. But Belitski double-crosses them and all of a sudden Trasker is back from the dead, blonder then ever.

In the end, it will boil down to the characters making a crucial decision. Byron must make a choice between answering for his crimes and true happiness. Trasker and Belitski must choose between taking Byron by force or collecting a paycheck and getting the hell out of this movie. And Matt must choose between a shower or calling Jim Cameron back.

Slipstream is a post-apocalyptic chase movie that attempts to be something more by injecting philosophical message about the nature of good and evil. It’s a nice ambition, but the movie doesn’t have a clue as how to pull it off. Despite a good beginning, the movie becomes just a collection of segments where the main characters drift from place to place, encounter additional quirky characters, and bicker endlessly. But the movie can boast a hell of a cast: 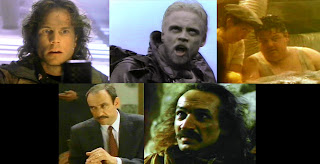 Hamill and Peck are the standouts in the film. Hamill is unbridled cheese, perhaps preparing himself for the Guyver series that would soon follow, but he’s also intense and genuinely interested in the role of tough guy cop. Peck as the robotic Byron is also solid, bringing an intensity, seriousness, and erudite air to the role of sensitive robot with a dark past. Everyone else is pretty much phoning it, including a cringing Kingsley, a lost Abraham, and a totally baked Paxton. Another peculiarity in the movie is a rousing score. It’s way too loud, epic, and boisterous for such a slight movie. The only time it quiets down is a flying scene where the Paxton character peeps on a woman doing nude yoga in a cave to the tune of some 80 sheet metal ballad. Slipstream is hysterical for all the wrong reasons, and the best reasons to see this movie is to laugh at the ham-fisted performances, witness the beauty of Turkish cave-dwellings, drop your jaw at the numbing dialogue, and blow dry your hair.

P.S. Take a look at the DVD case at the top left corner. None of the actors appear in this movie as they do on the box. Hilarious. If you can name the movies where those pictures were Photoshopped from, send me an email by February 1st, 2009 and you will be rewarded!
at 6:31 AM