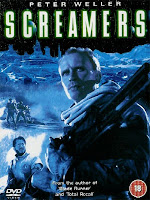 A philosophizing Mozart-loving buzz-cut Murphy, They Came from Home Depot, a Swayze-Bot, the vast wasteland of East Yuma, a Sternless Sirius, Officer Tater Salad, robo-zombie babies, dueling cyborg babes, a murderous Teddy Ruxpin, and a dark adventure from the mind of a Dick.

It’s 2078 and on the distant planet of Sirius 6B, a brutal war has been raging between the factions of the Alliance and the New Economic Block, or “NEBs”. The lengthy conflict has reduced the planet into a desolate hellhole with a toxic atmosphere and very little vegetation. After the NEBs hammered them with nukes, the Alliance evened the odds by creating and deploying Automated Mobile Swords, or “screamers”. The screamers are mobile weapons that move just beneath the ground, seek out the enemy, and mutilate them beyond belief with protrusions and saws. Both sides have reached an impasse, supplies and ammunition run low, and the hope for a resolution dims. One day, Alliance squad leader Hendrickson (Peter Weller) receives a message from the NEBs asking for treaty negotiations. Careful but optimistic, he takes the message with a dose of skepticism and enlists rookie recruit Ace (Andy Lauer) to go with him on a mission to seek the NEBs out in the badlands. There they encounter modified, revised, and apparently self-aware versions of the screamers, some modified to advanced killing power, others upgraded to human-sized android mutilators taking the form of kids, a feather-haired douche, and a mystery figure. Hendrickson and Ace meet up with a troop of NEB soldiers including hard-bitten Jessica (Jennifer Rubin) who know nothing about talks for a truce and inform them that the NEB base has been wiped out by the new screamers. When they return to the Alliance base to reassess the situation, they are attacked by a contingent of fully armed screamers. Hendrickson and Jessica make their way to a location of an emergency shuttle to launch themselves off the planet, but a sinister fate awaits them in the bowels of Sirius 6B, and it will probably be metallic, pissed, and shouty.

Master author Philip K. Dick's short story Second Variety is where Screamers draws its basis, but any resemblance to Dick’s typical mind-blowing narratives and explorations into human experience ends with the storyline and setting. That’s not to say that this movie is bad, in fact it probably should stand with the best of the Dick adaptations which includes Blade Runner, Total Recall, and Minority Report. Despite a low budget, the film does a better job than most movies with many times the budget and exchanges cheapness and hasty filmmaking for sharp dialogue, entertaining action, and a fierce pace. The special effects are solid, especially for the time and budget, although new audiences will probably not appreciate them as much. The story is a little creaky with some logical holes, but the atmosphere and characterization take a front seat to some unbelievable choices. Weller, who is often misaligned as a bad actor when he’s actually pretty reliable, is excellent, and rest of the actors toughen it up appropriately for the action-filled ride.

Which reminds me… Why is everyone such a ball-busting prick in the future? Seriously, take a look at militaristic or labor types in post-Alien action sci-fi movies. Everybody’s mad. Everybody hates each other. Everyone’s an a-hole. I mean, I know most of the situations are dire. The work conditions are poor. And the chance of survival slim, but Jesus, can’t we see a smile or a hug once in a while? Aye, but I digress.

The central idea at work in Screamers is the archetypal theme in modern science fiction where technology runs amok, develops on its own, and transcends the need for its creators. In doing so, its evolution has revealed the pointlessness of humankind. But in a good way. Throw in a message about the absurd senselessness of war, the fatalistic tendencies that are symptomatic of it, and some blood and guts, and you got yourself not only a neat little gory actioner, but a brain boost to match. And all under 100 minutes.

My sources indicate that 'Screamers' runs at 1:48.