SCIENTIFIC FACT LEARNED: Why take a Tylenol when you can take a minuscule Norwegian kid?

Not an Abba song, not a Star Wars enemy, not a Broken Lizard comedy, not a Paul Verhoeven sci-fi movie, and not like anything you’ve ever seen before.

Up in the happy land of Norway, a little boy named Simon visits his depressed, lonely Grandpa who still grieves over the loss of his crooning wife thirty years ago. Grandpa used to be a jazz musician known as “Blackbird” and wifey used to sing in his band. The poor old guy is sickly and ghastly pale due to the sorrow of losing his soulmate. That, or he’s just Norwegian. Simon does a Calvin and Hobbes bit where he talks to his talking neurotic teddy bear that complains and dispenses useless advice that doesn't involve fabric softener. 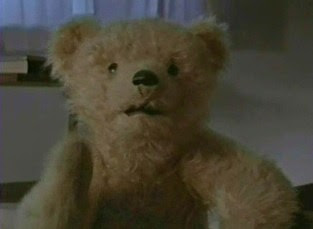 Simon learns about his Grandma, her beautiful singing voice, and her tragic death that nearly destroyed Grandpa. One night, Grandpa is moaning, groaning, and writhing in bed like a post-midnight run to Los Betos. But his problem is not as simple as the enchilada combo. His emotional state is making his physical state worse and Simon is befuddled as to how to help him. So why call an ambulance when you have a magical teddy bear? The bear whips up mystical potion that reduces Simon to microbe size. Simon then, ahem, enters his Grandpa to search for the cause of his agony, which turns out to be this guy: 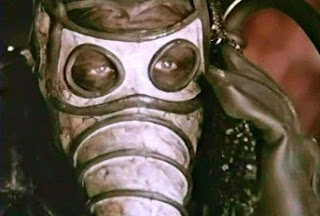 Body Monster or Bespin Spy?
Simon encounters weird ass shit like talking taste buds who want to lick him, saliva washes, and Grandpa’s halitosis. He meets Napster*, a young, bullyish white blood cell who joins Simon on his quest to find out what’s wrong with Grandpa. Pursued by the disease monster, they make their way up and down his esophagus, make a side trip to his bile-filled stomach, and eventually encounter cute red blood cell Alveole, who’s just hanging around his mucky lungs. And if that’s not enough fuel for your nightmares, take a look at Grandpa’s brain: 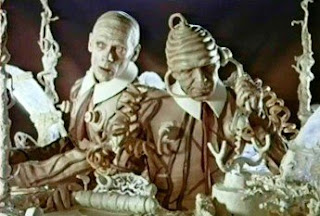 The monster catches up with the kids and Alveole (here’s where the hard science kicks in) does an interpretative dance to distract it while the boys make their escape. The kids rummage around Grandpa’s bladder and anus searching for way to his heart. (I can’t believe I just typed that.) Eventually, they arrive at the heart and discover that the key to solving part of Grandpa’s problem is to release the Princess of the Heart who dwells in his inner aorta waiting for a heroic deed to release her from solitude, and thus healing Grandpa’s emotional pain. They also discover that his physical pain stems from kidney stones that can only be destroyed with water. So the gang arms themselves with jugs of water, takes a dip in a pool of piss, and prepares themselves for a battle of intestinal proportions.

*In the English dubbed version I watched, Simon keeps calling this kid “Napster” or “Mapster”, but IMDB lists him as “Globule”.

I want to say that there’s almost no way to describe this kiddy sci-fi fantasy. But the only words that spring to mind are “fucking” and “weird”. Body Troopers is a bizarre little Norwegian nugget that’s possibly the most disturbing movie I’ve seen in a long time. It’s either one of the most misguided attempts at a charming fantasy or a foreign artifact that only has cultural significance to its Norwegian roots. Or maybe it’s just a trippy-ass movie. 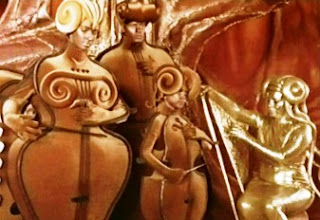 But what’s obvious is that everyone takes the proceedings dead-serious, from the expressionless Simon to the guy playing the Appendix. There are some cute moments such as the appearance of the Secretion Agent, a cloak and dagger type character who tips the kids off to the source of the pain and the scene with the Bile Queen, a witchy lady who dispenses acidy guilt after eating sweets. Just try to keep your lunch down after witnessing what she does to a worker who disobeys her. Curiously, there is no appearance of talking farts or poop because right then and there I would have declared this a masterpiece. The sets and costuming are fairly impressive, recalling Lynch’s Dune and something out of a gothic Alice in Wonderland. To the best of my knowledge is movie isn't readily available, but I'm sure you can scrounge around the web and find a copy. Body Troopers is perfect for those who love twisted kids’ tales, those who can’t afford medical school, and those that enjoy LSD.
at 6:22 AM

Where do you find this crap???