SCIENTIFIC FACT LEARNED: The cuter the robot name, the more likely it will turn on you.

H.G. Wells’ morbid Tilt-a-Whirl, That 70s Ditzy Blonde Actress That Isn’t Georgette, spaceships from my toybox, Curly in a Cape, robots that unsurprisingly have better pick-up lines than me, Planet Bowling Ball, and the shape of things that are dumb.

In the far future, Earth has been ravaged by the devastating “Robot Wars” and has been made inhabitable, or so the typo-riddled scrolling prologue informs us. The survivors have fled the planet for the shopping mall future of the Moon where they live in giant dome and discount prices. To survive this new environment, everyone much take regular doses of a drug called Radic Q2 that is only available from the planet Delta Three. The colony is also dependent on the near-omnipotent decision-making power of its central computer Lomax.

Political strive between chief scientist Caball (Barry Morse) and Senator Smedley (John Ireland) ensues and reveals the tenuous line the colony teeters on. Things get worse when it is learned that Delta Three’s government is overthrown and the planet’s leader Nikki (Carol Lynley) is ousted. The coup was engineered by snappily dressed but evil Omus (Jack Palance) who has amassed an army of robots to launch attacks on the Moon colony in order to take it over. 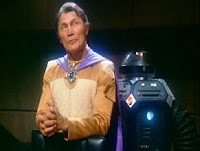 Caball and Smedley disagree over how best to handle the crisis, forcing Caball to enlist the aid of his son Jason (Nicholas Campbell) and daughter Kim (Anne-Marie Martin) to hijack an experimental spaceship, travel to Delta Three, and preempt Omus’ next attack. Kim reprograms one of Omus’s robots and renames him Sparks and the thing promptly falls in love with her. Eww. As they take on Omus and his stumbling non-quipping ‘bots, they encounter a group of refugee children, a band of rebels headed by Nikki (yes, Rebel Leader … Nikki), and the most exciting laser shootout since 1983 LaserTag at Golf ‘N Stuff.
THE FINISHER:

It looks like 1979 was a banner year for silly Star Wars riffs which included Italy’s The Humanoid, Disney's The Black Hole, and Canada’s The Shape of Things of Come, whose title is also prefaced by H.G. Well’s, as in the guy who wrote War of the Worlds. Loosely to not-at-all based on the science fiction master’s novel, the movie is a goofy, second-rate, boring, but not entirely awful space saga. In other words, it’s bad, but I’ve seen worse.

It gets a few points for effort. It tries to be cute and more often than not succeeds. The actors try to be cheerful and as serious as possible at the dumb dialogue they’re spouting. The Canadian-made robots and ships are not inept, not good, but not damningly awful either, much like Howie Mandel. There are black hole-sized lapses in logic in the plot. For instance, if Delta Three, a very Earth-like planet, is so valuable to Earth’s survival, then why didn’t they just move there instead of the barren vacuum of the Moon?

The movie is so slow and bland, that I found it difficult to mock. I just ended feeling kind of sad for everyone going through the motions, little guys getting in those hot robot costumes, and the director running out of pot. But there are far worse sci-fi offerings out there than The Shape of Things to Come, and for the most part the movie is watchable if want to gaze at an artifact of the Star Wars craze now long dead.

But it’s got a plus - Carol Lynely, a wet dream star of teen years long past.