Sad Max, Harvey Fierstein the Constipated Android, Paré-us Interruptus, an Armageddon Mama, the most deadly vegetable since Patrick, first draft of a Duran Duran song, a sweet Post-Apoc montage, a refugee from Villa Allegre, line lifts from Star Trek, Dune, Terminator, and the Frugal Gourmet, and Look What the Cat Drago-ed in.

Yet again, the Moon marks the last vestige for mankind as an environmentally inhospitable Earth has forced all the jerks to flee and establish an intolerable, fascist state. Following a cataclysm known as the “Big Burn” that reduces the world to the equivalent of Chloride, Arizona, the landscape is ruled by outlaw bikers, face-painted killers, and Larry the Cable Guy fans. Back on the Moon, Captain Brody (Michael Paré) is a Lunar Cop, a mean moon Marshall, the big Kahuna on the Luna, and other unfunny moon allusions. He’s the best of the best and when an Earth spy steals a scientific device known as “amaranth” from the Moon base, he’s selected to return to the planet and retrieve it.

We learn that when released into the atmosphere, the amaranth will restore the Earth to its former pre-Al Gore glory. But the Moon people have a sinister plot to kill the undesirable savages on the planet with a man-made disease before the resettle the Earth. Unfortunately, doing so would also wipe out a peaceful village where Brody meets total babe Thora (Walker Brandt). 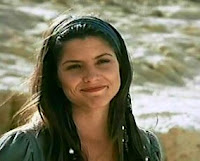 After Brody stops Thora’s attempted gang rape, he is invited to her village for food, a shower, and a peep show by perv kids. Thora is the daughter of a scientist who is aware of the genocidal plans and knows the location of stolen amaranth. But before Brody can complete his mission, the village is attacked by a gang of motorcycle outlaws called the Rough Boys, who are headed by the bloodthirsty, out of breath, desperately in need of a sandwich Kay (Billy Drago).

Brody promptly cocks his shotgun, clotheslines the crap out of everyone, and teaches the villagers how to make war, which results in chaos, head shots, and cool aerial motorcycle footage.

After the skirmish, Brody contacts the Moon and informs them that not everyone on Earth is violent and savage and suggests that the plans to unleash the disease be stopped. But the Moon leader disagrees and sends raspy-voiced killer android Stopper (because he stops, um stuff) to kill Brody and complete his mission.

Brody and Thora have fallen in love, much to her father’s chagrin. Dad reveals a dark secret about Thora that has implications for their future as well as that of the entire Earth. But if he is to save the planet and the very future of the human race, Brody has to pare down the unstoppable Stopper.

And his indestructible hair.
THE FINISHER:

How can I describe the feeling after watching a movie that totally took you by surprise? Is it like a first kiss, where a soft bliss buzzes around your head, momentarily erasing sense of time and place? Is it like taking a big bite out of a chocolate cake after fasting for three days, your mouth filling with creamy goodness, lulling you into a glowing, sugary state of ecstasy? Or is it like, hey, that’s wasn’t too bad … so hot dogs for lunch?

Solar Force: Lunar Cop, a cheapo sci-fi flick starring B-movie staple Michael Paré, certainly shocked me by how much I enjoyed it, but please do not presume that I’m saying it’s a good movie. But it’s a good movie, a pleasing post-apocalyptic escapade that doesn’t skimp on the action or slows down for a minute. Other movie sites have described it as the worst movie ever, which is ridiculous because I can name a dozen movies off the top of my head that are a thousand times worse. I mean, how can you hate a movie with a hot babe, a competent ass-kicker, well-executed action, TWO boo-hiss villains, and TWO endings? Seriously, once one battle ends, a second one begins. Twice the bang for your buck, good friends. Plus it patronized my heritage by having villagers in huge sombreros run around frantically. But what really clinched the deal for me was a well-structured romantic subplot, good chemistry between Paré and Brandt, and, of course, unintentionally hilarious dialogue. Solar Force is a fun B-flick with plenty of stunts and explosions, a little bit of heart, cheapo Moon bases, and a bittersweet ending that doesn’t Lunar Cop-out.