SUPER POWER GAINED FROM WATCHING THIS MOVIE: The Ability To Run Fast, Really Fast From Crappy Movies Like This One 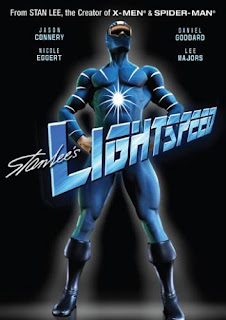 OO7’s Little Dividend; the New King of Hammy Serpentine Villains; the Not-Quite Six Million Dollar Paycheck; the Cinematic Splendor of Central Utah; Superhero Outfits by Play It Again Sports; Stan Lee finally out of his mind; and I wish Nicole Eggert’s name started with a “B” so I could say that she puts the “B” in B-movie. Heh.

Edward (Daniel Goddard) is a scientist who invented some Brundle-ish doo-dad that creates artificial skin for burn victims. His government-financed research was inspired by the untimely death of his sister in a fire which deeply scarred him psychologically. His friend Daniel Leight (Jason Connery) is a member of a government ops team called the Ghost Squad headed by tough guy Tanner (Lee Majors) which either infiltrates international terrorist cells or busts up old man Barnum for scary pesky kids off his haunted farm. But I digress. One day, Leight informs Edward that he has learned through his secret contacts that Edwards funding will be cut and his operation will be closed down. Bitter and blameful towards Leight, Edward seals himself way in his lab in an apparent suicide attempt. He enters a tube where the treatment is applied but for some he doesn’t see the FRIGGING PYTHON that was already in there. So the treatment doesn’t kill him, in fact it makes him stronger, evil, and decidedly scaly. The former Edward has merged with the snake to become the arch villain Python. And he’s out for vengeance because his grant got frozen! Insert BWHAHAHAHA here. Python assembles minions and goes on a tear searching for something called the Flux Capacitor or the Wax On Wax Offer or some such shit that’ll enable his desire for the destruction of the world. When Ghost Squad attempt to stop him in a shootout, Leight is injured and hospitalized. Python then raids the hospital and tries to kill Leight by aiming a radiation machine at his legs. Later, Leight discovers that the radiation has given him super speed so he raids the local sporting goods store operated by stoners and in his speed skating suit he becomes the supersonic hero Flas…er …Quicksil…um…Lightspeed! Our new hero then goes on to thwart Python from blowing up D.C. (aka South Provo), win over his true love (Nicole Eggert) and show her why they really call him Lightspeed, and then beat Steve Austin to the Tasty Freeze in a potato sack race.

Up until a few years ago, whenever I read the words “Stan Lee Presents”, my eyes lit up like dizzying sparklers anticipating the sheer escapist and wonderful four-color adventure that would surely follow. Today, not so much. In fact, those words now open floodgates of sadness, senility, and wrong-headedness that embody what the great Stan Lee has produced recently in conjunction with the Sci Fi Channel. In particular, spectacularly lousy Sci Fi Original Movies, a vast wasteland of TV movie crap (albeit an innocent pleasure), and achingly awful reality show Who Wants to be a Superhero. Lightspeed is one of the former, just ahead of a few other Stan Lee-inspired Sci Fi crapisodes to be reviewed later this month. This movie is really really dreadful, even by Sci Fi Original standards. But I can’t say I hated it, in fact the best part of this awful movie is that it inspired a few awesome one-liners by yours truly in form of self-important mocking. I just wish I could have remembered those zingers. If only there’d been someone else in the room. … Ah, loneliness. Again, digression. The movie looks as if it were shot by not only a first time director, but a first time director of photographer, composer, sound man, grips, and probably craft services. Connery looks befuddled and close to tears. Eggert coos, sucks face with Connery, and flashes her tramp stamp to keep the audience awake. Majors looks happy just to have been invited. The superheroics are lame, the score is jewelry box quality, and everyone looks just awkwardly embarrassed to be there. And they should be. Connery, despite his pedigree, is an odd choice for the lead. He’s an older guy, is balding, and looks almost nothing like his famous Dad. They probably would have been better off with the winner of Who Wants to be a Superhero.

But that guy is waiting for his Mega Snake II breakout.
at 6:29 AM

Poor Stan Lee: I bet he feels like one of his troubled superheroes these days. But I will stand up for this movie on paper only. There's nothing wrong with this story. It's a typical yet AWESOME concept and it coulda been good. Too bad it wasn't.