SUPER POWER GAINED FROM WATCHING THIS MOVIE: The Ability To Be Friendly in Your Neighborhood, Become A Wall-Crawler, Sense Like A Spider, And Crap On Copyright. 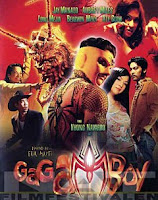 Irritating nerd Junie (Vhong Navarro) is a hapless ice cream vendor servicing the greater Acmeville area in the Philippines. His chief rival in the Popsicle business and his love for cutie Liani (Aubrey Miles) is the mustached and spiky-haired Dodoy (Jay Manolo). Junie is a chronic nice guy who gives free treats to the poor kids, but he’s also a bumbling idiot who can’t work up the nerve to proclaim his love for the lopsided-boobed Liani. Taking advantage of Junie’s incompetence, Dodoy squeezes into his territory and tempts her with flowers and fine furnishings. Meanwhile, a dump truck of nuclear waste that looks suspiciously like melted Halloween wax is dumped in the slums where a plucky spider and a nasty cockroach become infused with radiation. Junie is at the end of his ropes, out of a job, mourning his parents, and losing his girl. But with radioactive poisoning comes radioactive responsibility as he accidentally swallows the spider and is imbued with spectacular agility, fighting skill, and goop-spurting abilities that don’t involve … uh nevermind. With a renewed sense of confidence, Junie becomes Gagamboy (Spiderboy), protector of Acmeville, its poor, its downtrodden, its cross-dressed. Dodoy has a similar encounter with the radioactive cockroach and after he’s ingested the nasty bug (man, times are tough), he becomes Ipisman, half-man, half-roach, all dork. He leads a merry band of thugs and shakes things up in Acmeville including kidnapping Liani from possibly the most upsetting beauty contest in history. The final stage is set for a confrontation between these two nemeses, and nothing short of a tsunami or the almighty Weng-Weng (a REAL Filipino superhero), will stand in their way.

If you like movies that display the intricate artistry of cinematography and set design, present the heights and depths of emotion through crafted performance, and resound with a visceral statement about the human condition, please by no means continue to read this. Gagamboy is a head-scratching oddity, a slapstick mish-mash of a cheap kung fu flick, marginal superhero action and cross-dressing burlesque. It’s also a radioactive barrel full of cheesy breezy culturally specific wackiness that probably played well in Manila, but not so much at Casa Tremendo. The movie is played for laughs primed with silly mugging at the camera, goofy dancing, and face-palming stupid physical gags. It very much feels like a live action cartoon in the spirit of the old Warner Brothers Looney Tunes, only they forgot to include actual entertainment. I don’t know, maybe it’s the cultural differences between Filipino and Tremendo, but the film’s lame attempts at madcap humor were inane and mostly insufferable. The storyline, when they stick to it and not veer off into some gag or strange tranny reference, is basic good versus evil and the romantic subplot is basic nice guy versus slimy jerk. The CG is fairly OK for a low budget project like this, but pretty much forgettable. Gagamboy is one of those movies you uncover and say to yourself, “Wow, I’ve seen the Turkish Spiderman, now I can see the Filipino Spiderman. Bad Movie Night, here I come!”, but then you actually watch it, hate yourself, and regret ever clicking on that Netflix link or liking bad movies. For a much more enriching experience, stick to the Japanese Spiderman live action show or dust off those old videotapes of the Electric Company.
at 8:22 AM