The ghosts of Gerry Anderson past, the frigid wife of Clement Clarke Moore, a visit from St. Atrocious, puppet baby Jesus, and a friendly corporate reminder from AT&T: WORSHIP CHRIST!!!
More details here.

An officious looking corporate spokesman speaking in front of a bank of phone operators introduces two Christmas stories brought to you from “Your Phone Company” (aka Bell/AT&T). The first is T'was the Night Before Christmas followed by the story of the Nativity, both told through the magic of horrifying marionettes. The first segment is introduced by real actors playing Mr. and Mrs. Clement Clark Moore. Moore was some kind of pastor or something and on X-mas Eve, he and the wife are talking about the story of St. Nicholas. The conversation inspires him to sit down and write the legendary poem while the family sweetly slumbers. Then the horror begins. The poem is narrated to soulless marionettes prancing around and doing weird, stiff zombie-puppet stuff. Witness the horror of St. Nick himself: 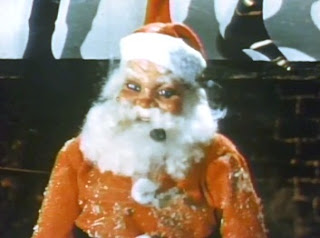 I know when YOU are sleeping. Ho ho ho! Don't open your eyes...
Jesus. Speaking of whom, the next story is the Nativity. The story is taken straight out of the bible, including the bit about the Romans over-taxing the people forcing Mary and Joseph to flee Nazareth, the three Wise Men riding paper-cutout camels and trekking to Bethlehem, and the visit to King Herod who, in this version, is glad to hear the news of the arrival of the Messiah. Um, yeah. The story ends, predictably, with the arrival of the Three Wise Men at the manger with their gifts of gold and that other stuff everyone cracks wise about. The show ends with the guy in the suit and a cute phone operator wishing everyone a cold corporate Merry X-mas.

Spirit of Christmas isn't technically a movie, but I couldn't let an X-mas Wrath go by without including this corporate-sponsored oddity from the early 50s. It's so weird and primitive I can't even begin to describe. Except that it's weird and primitive. Oh, and disturbing. You've got marionettes with dead eyes seemingly operated by nervous three-year-olds. Take a look at this one: 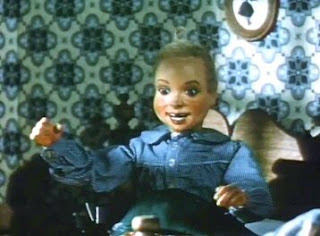 AHHHHHHHHHHH!!!!
And his sister: 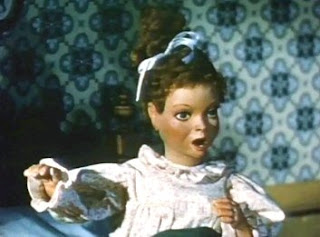 AHHHHHHHHHHH!!!!
Forget the Ghost of X-mas Future. This is my new true horror of X-mas. A little research on this thing reveals that it was telecast during the holiday season for years in the 50s and 60s, mostly on the east coast, before disappearing and resurfacing on DVD recently. I can't see young audiences getting into it today, except to crap in their X-mas Underoos at images like this: 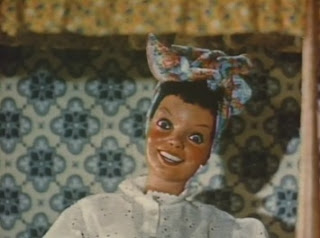 Merry X-mas from your Nightmares! Bwahahahahahaha!!!!
at 8:24 AM

holy crap! that IS SCARY!!!