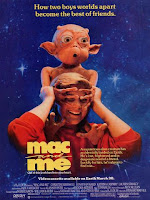 Not a Steve Jobs biography; Charles' charge; the love theme from Joggin’ With Mom; shameless Skittles, Coke, McDonalds and Chicago Cub whoring; self destructive strip malls; You Been Served, and Super-Sized; sweet nourishing soda pop; They Came From Planet Mummenchance; skinned cat aliens who like to whistle the theme to the NBC Sunday Night Mystery Movie; and E.T.: The Extra Terrible.

On the abandoned set of Enemy Mine, a family of creatures are basking in the reflected radiation of Saturn and sucking planet juice from a silly straw. The aliens are rail-thin, have weird bug-eyes, look like they’ve got balls in their mouths, sport a permanent “O” face, and apparently are covered in bumpy sores. Yes, these are the cute loveable critters we’re supposed to love and not vomit violently over. Suddenly, an unmanned NASA space vehicle equipped with water jugs and a vacuum hose lands and accidently sucks up our little family up the rover’s pooper. The lander returns to Earth where the little family causes all kinds of wacky ruckus, sets off electrical fields, and escapes from Area 26, Area 51’s lesser-budgeted sister base. Meanwhile, the Cruise family consisting of Mom (Christine Ebersole), Michael (Jonathan Ward), and wheelchair-bound Eric (Jade Calegory) travel along the highway adjacent to the base on their way to a new home in California. Unbeknownst to them, a member of the family, the creepy-as-shit little baby, hops aboard the Cruise’s car while the rest of his family has gotten lost in the vast desert. The exhausted and thirsty little alien steals Eric’s drink and gets his first hit of Coke (first one’s free), restoring his horrific self to a slightly less horrific state. The next day, Eric experiences weird happenings in his new rad house with wood paneling. Trees are planted in the living room, toys move by themselves, and an eerie little shit alien is doing a Jack Torrance on his front door. After befriending Debbie (Lauren Stanley), the odd little girl next door, and her hot Kelly Bundy wannabe sister Courtney (Tina Caspary), Eric and Michael chase down the little alien and call him M.A.C., for Mysterious Alien Creature. (Hey, the writer’s no D.A.R.Y.L.). They learn that Mac needs to reunite with his family, has a genetic disposition to break dance, and that soda pop is like crack to these things. With government agents breathing down their necks, the little alien family sweating it near Barstow, and the fast food dance party/two-all-beef patty orgy in full swing, Eric and his friends race against time to unite Mac with his family in order for the McDonald’s empire to consume colons across the solar system. Eventually, with the grace of a stoned God and a few hits of pop, the family reunite are made full-fledged U.S. consumers. And like a Quarter Pounder with cheese and a New Coke gurgling in your gut, the Macs promise to return. Uuuuurp.

Back in the 80s, I practically lived at my local movie theater, a slapped-together joint called The Alco, which had a fairly nice screen, awful sound, outdated video games, and stale popcorn. I watched many 80s blockbusters in that wonderful place with images of Flynn, Lone Wolf McQuade, Ator, and Emmy Hesire coming to mind. Unfortunately, The Alco closed as our little town’s economy went down the shitter after the local copper smelter shut down. (Thank you, Ronald Reagan – Union Buster!). The nearest multiplex was over two hours away, so suffice to say I missed out on a lot of late 80s kiddy fare, most of which will reviewed right ‘chere. Thankfully, Mac And Me, one of many non-human foundling rescued by a cute kid or weird adult on the run from the government/evil corporation/Renaissance Faire Enthusiast stories, was one that I completely missed. (See D.A.R.Y.L., Short Circuit, Pod People). This kiddy movie features not a loveable alien but a horrific nightmare from a hospital burn ward. But even more repulsive than the skin-grafted alien design is the fact that the movie is less a very late E.T. rip-off (released six years later) and more an extended commercial for McDonalds and Coca Cola. The aliens look like famine victims with mega jowls blowing out birthday candles frozen in time - not very pleasing to watch and definitely not cute or remotely sympathetic. Besides the terrible effects, commercial-driven storyline, disabled-person exploitation, and derivative-of-himself Alan Silvestri score, there’s very little else to talk about in this awful flick unless you want to examine the symbolism of fast food restaurant dance numbers, alien furry cosplay, and Ronald McDonald’s taint, in which case may have to ask you to leave.
at 8:49 AM