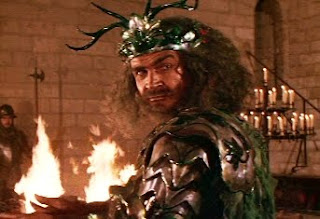 Only Connery can make X-mas Wreath headgear look good.
His call goes out unanswered by the wimpy knights but when the Green Knight stirs up some hairy chest-heaving boasting to boil the blood of the King’s young nephew and squire, Gawain (Miles O’Keefe). 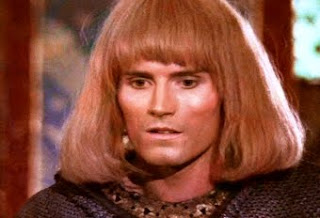 The Golem haircut was all the rage in the 800s.
Gawain successfully completes his challenge and we discover that the Green Knight can double as both an X-mas AND Halloween decoration. 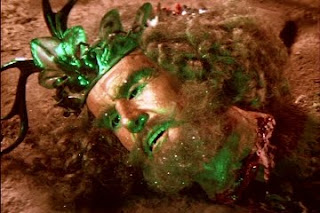 “I knew I should’ve taken that Star Trek V gig.”
But it was all a ruse! G.K. quickly picks up his head and mocks young Gawain’s impudence. He lays out another challenge that in exactly twelve months they are to meet again so that G.K. can have a swipe at Gawain’s neck. But first, Gawain has to explore the world in search of a clue to G.K.’s riddle that will somehow involve… 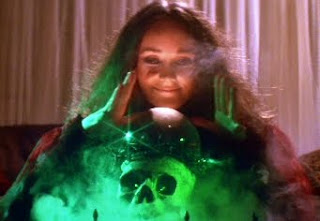 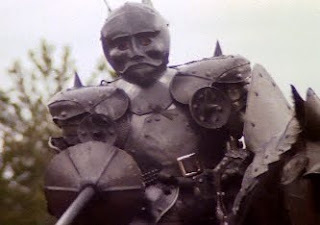 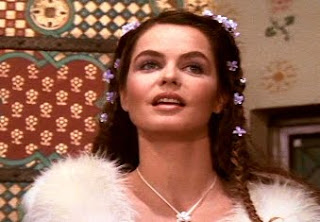 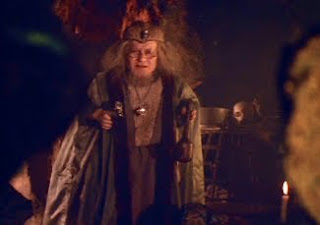 And powerful but tiny sorcerers!
So faster than you can say “Joseph Campbell’s erection”, Gawain sets out with his humble servant Humphrey (Leigh Lawson) on a quest to find virtue, honor, and courtly love and maybe kill and violate a unicorn or tow. Along the way, he is conned by the treacherous Morgan La Fay (Emma Sutton), coerced into battle by the Black Knight (Douglas Wilmer), and courts mysterious and beautiful Linet (Cyrielle Clair) who may or may not be a pigeon. Midway through his adventure, the story comes to a full stop when Gawain is imprisoned by a crazy family of knights headed by Baron Fortinbras (John Rhys-Davies, doing his Brian Blessed impression), his weasel son Oswald (Ronald Lacey) and his weirdo spiritual advisor Seneschal (Peter Cushing). Following some ham-fisted swordplay, interactions with rowdy Friar Vosper (Brian Coburn), dull as a Classics lecture battle scenes, and dreary dialogue with miniscule wizard Sage (David Rappaport), goofy Gawain once again meets with the Green Knight to fulfill his agreement and get his head chopped off, not that anyone will notice.

The 80s were a prosperous time for the fantasy/barbarian genre with offerings such as Conan the Barbarian, Dragonslayer, Krull, Hawk the Slayer, and many others which reeled in cinemagoers starved for swordplay, heaving bosoms, and dragon battles. But for the most part 80s fantasy films sorta sucked and never really delivered what their trailers promised (I know, the same can be said for any movie). Sword of the Valiant presents the very same disappointing suckage of the worst of 80s fantasy with an added ambition to resemble in form, language, and theme the far superior and serious King Arthur telling Excalibur with spectacularly failing results. Based on the 14th century epic poem “Sir Gawain and the Green Knight”, the movie strives to be a larger than life and self-important re-imagining of the ancient tale but without a modern context or any intent beyond bloody action and fumbling fight scenes. Muscle man O’Keefe of Tarzan the Ape Man fame does his best Prince Valiant impression with poofy shirts and confused look to match while Connery bellows out his lines, sucks in his hairy gut, and just hopes the glitter make-up won’t sweat off. The swordplay and fight choreography were especially bad, like those weirdos who meet in public parks and do that role-playing stuff. You know the ones, he said as if masked movie bloggers were any better. Produced by Cannon and the producer team of Golan-Globus, the movie has a slapped-together low-budget kind of feel, a hallmark of G-G’s output which can sometimes either be endearing or outright awful. Unfortunately, Sword of the Valiant falls into the latter category if you are expecting a fast-paced fantasy tale sent in the gilded age of chivalry and brave nights, but rather ripe for mockery and watchable with enough ale, wenches, and medieval Tylenol.
at 7:08 AM

We're far away from lord of the ring.

Hey El Tremendo, it's Matt at the DTV Connoisseur, and I'm actually considering reviewing this one soon too, because it has one of our faves, Miles O'Keefe. Sorry it took so long to become a follower and link you on my blog, and thank you so much for doing the same.

Cant believe Sean Connery was on this one! But then again..he did do Zardoz, so it shouldnt surprise me.

Sad part is, I saw this film in theaters. I remember feeling immediately dissapointed with it. Such a bad movie! And what about the main characters hair? Good for a laugh any day of the week!

Thanks for reminding me of this ultra cheesy flick!