On the planet Trinia, human slaves toil in an underground mine extracting crystals from the planet’s core under the cruel laser-whips of their robot masters. The overlord Zygon (Anthony De Longis) keeps them under his purple thumb by forcing them to believe that nothing else besides the mine exists and that they are better off toiling for him than to suffer a hellish life on the surface. But plucky young Orin (Joe Colligan) believes in a world beyond his cruddy digger life and dreams of freedom for his Grandpa, blind brother Calli, and best girl Elan. One day he discovers a mysterious helm embedded in the rock, and in typical old coot fashion, Gramps proclaims it the stuff of legend, the object that will free the humans from their subterranean prison. But Gramps gets unceremoniously snuffed by the sado-bots which enables Orin and Elan to escape to the surface. Above the cave, they discover a hideous world of cold technology where they are cornered by Zygon and his robot legions. With the aid of the mystical helm, Orin is able to escape Zygon’s grip, but at the cost of Elan’s life. Believing Orin is dead, Zygon goes about his evil day but the determined youngster makes it to the surface and instead of a hellish wasteland promised by Zygon, he finds a nightmarish hellish wasteland. After being tortured by body-part starved mandroids and licked by hungry hungry killer plants, he teams up with roguish Dagg (Carmen Argenziano), a dashing smuggler with a penchant for curvy fembots and nervy wisecracking computer systems. Believing that the missing blade of the helm is the key to freeing his people, Orin tries to persuade the reluctant Dagg to join him in his quest. Eventually Dagg gives in, being the raffish softy that he is, and helps to bring Zygon down. A few adventures and robot killings later, they meet Princess Aviana (Noelle North) who falls in love with Orin after 15 minutes (that bladeless helm is chick bait!) and takes them down the path to fight Zygon face-to-face. Zygon reveals himself to be a robot who’s about to start a galactic war that will mean the end of all humans. So it’s up to Christ-like Orin and the inglorious dastard Dagg to take down the robot nation and reclaim the universe for humans to fuck up.

The 80s were sort of a waning period for the feature length animated film. Most of the major releases were extended commercials for toys or TV shows (Care Bears Movie, My Little Pony) and Disney was churning out mediocre stuff until its animated rebirth with 1989’s Little Mermaid while Don Bluth scored some hits with Secret of Nimh and the unstoppable Land Before Time franchise. Of course, some hidden gems can be found that more adult in nature released by smaller outfits, titles such as Plague Dogs, Rock & Rule, and the cult fave Heavy Metal. Produced by 80s craptacular distributor Atlantic Releasing (Teen Wolf, Modern Girls, Garbage Pail Kids Movie), Starchaser: The Legend of Orin completely passed me by, and while this animated space opera doesn’t really offer anything new besides a mish-mash of Star Wars, Black Hole, Lord of the Rings and possibly six or seven other works, it’s mostly harmless, at times charming, and rarely dull. Although it doesn’t have frenetic pace and seizure-inducing action of today’s cartoon epics, I can see a 21st century kid digging this flick. I mean, you got all the elements of a little boy fantasy: 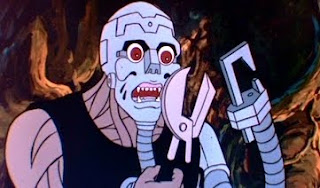 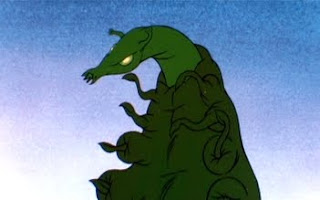 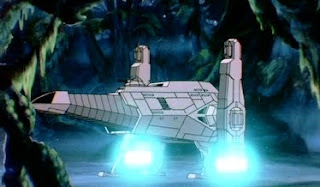 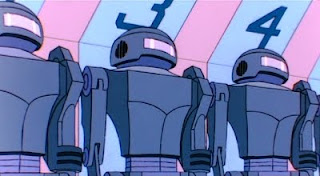 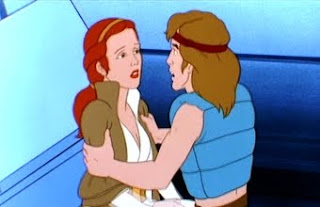 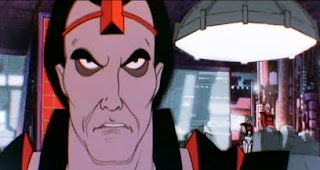 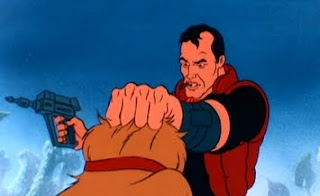 Yeah, so what if the animation isn’t up to contemporary par? Who cares if the characters are cookie cutter space fantasy clichés and the narrative a thinly veiled Biblical tale? Who gives a mandroid turd if the colors are flat, the synth soundtrack cheesy, and the space ship’s computer system more Paul Lynde than Paul Lynde on St. Patrick’s Day? Starchaser: The Legend of Orin is a mild, breezy, and sorta fun time killer that’ll make you yearn for your long-gone Saturday mornings when you were whipped by a fembot tantalizing you with Captain Crunch and a ball gag.

Oh wait, those were my Saturday mornings…
at 8:23 AM